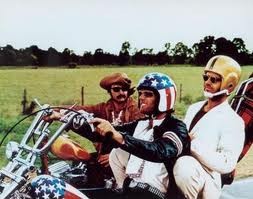 "Got a helmet?" is a famous line from iconic motorcycle movie, "Easy Rider" and is a question legislators need to mandate, says Thomas Esposito, MD, head of trauma at Loyola University Health System.

Newswise — The dream of motorcycle riding with the wind in your hair and the sun on your face became a reality in Michigan as the state famous for the motor city repealed in April a law requiring helmets for motorcycle riders 21 and older. Motorcycle helmet use laws have been debated from the standpoint of infringement of rider freedom in many states. “But what is seen as an infringement on the rights of motorcyclists is equally an infringement on the rights of non-riders,” says Thomas Esposito, MD, chief of the Division of Trauma, Surgical Critical Care and Burns in the Department of Surgery at Loyola University Medical Center. “Repealing helmet laws infringes on the general public’s right to expect government to control health care costs and protect the public’s safety.”

Scientific studies have shown that the arguments against helmet use based on impairment of peripheral vision and hearing, thereby posing more of a safety risk, are fallacious. “Many of the freedom issues with smoking are analagous to motorcycle helmet laws,” said Esposito. The trauma surgeon, who also has a masters degree in public health, finds it curious that there hasn’t been the same opposition to mandatory legislation that bans smoking in public places (such as restaurants and bars) by smokers as there is from proponents of non-helmet use. Esposito also notes the lack of vociferous support for helmet laws by the non-riding public in relation to that for smoking bans by non-smokers concerned about the effect of second-hand smoke. The evolution of increasingly strict seat belt laws in another example of personal versus public freedom debates.

Nearly 5 billion dollars was absorbed by the non-riding public in the form of increased taxation, higher insurance cost and lost taxes. “Numerous studies have shown the costs to the health care system of unhelmeted motorcyclists are astronomical,” said the trauma expert. “One overview of states with and without helmet use laws estimates that more than 120 million dollars in medical care and rehabilitation expenses per year were due directly to non-helmet use.” Esposito notes, “The authors of that study suggest that legislation mandating motorcycle helmet use should be considered as a viable alternative to raising taxes.”

The fatality rates per 1,000 for non-helmeted riders is 6.2 percent while those with helmets are 1.6 percent.

Illinois has had a checkered history with regards to motorcycle helmet laws, vascillating between enactment and repeal. Currently, there is no helmet law in Illinois. Loyola is the only Level 1 trauma center verified by the American College of Surgeons in Illinois and regularly cares for patients with the most complicated injuries in the Midwest.

Michigan is the 31st state to make helmets optional while 19 states and the District of Columbia have laws mandating helmet use for all riders. Most states require helmets for moped and scooters as well as for bicycles.

“Since 2004, Loyola has treated 541 motorcycle injuries and only 135 (25 %) of those patients were wearing helmets,” said Esposito. Zen and the Art of Motorcycle MaintenanceDr. Esposito admits that helmets are only one part of the motorcycle safety equation. He offers his expertise in this guide for motorcycle safety.

• Wear leather chaps, and the proper jacket, boots and gloves. “Burns from the exhaust pipe and also road rash - skin abrasion from falling while on the bike are fairly common in our Loyola trauma center.” Dr. Esposito states that many lower extremity inquiries sustained in motorcycle crashes are akin to those sustained by detonation of roadside bombs in Afghanistan.

• Keep license and insurance up-to-date. “Motorcyclists must carry $20,000 in medical insurance, at a minimum.”

• Don’t drink and drive. “Riding a motorcycle at 65 mph on a busy highway is intoxicating enough. Leave the alcohol for the engine fuel.”

As a Level 1 trauma center, Loyola is equipped to provide comprehensive emergency medical services to patients suffering traumatic injuries -- car and motorcycle crashes, stabbings, athletic injuries, falls -- using multidisciplinary treatment and specialized resources. “Unfortunately, without the influence of state laws, many motorcyclists may become as familiar with the workings of a hospital as they are with the workings of their motorcycle,” Esposito said.