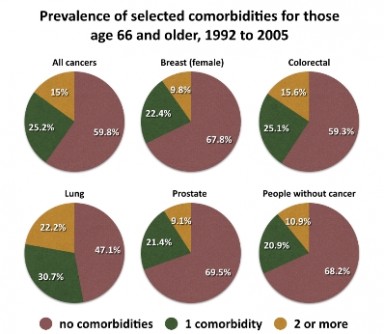 Measures of comorbidity can contribute to understanding how multiple diseases work together to affect outcomes. For cancer patients, incorporating comorbidity measures into treatment planning may lead to better decisions about the potential risks and benefits of treatment options.

The special feature of this year’s Report highlights the prevalence of other disease conditions, (diabetes, chronic lung disease, cardiovascular disease, and 13 others) in cancer patients over 65 years of age, and how they affect survival. Studying comorbid conditions is especially important because cancer is primarily a disease of aging and the prevalence of comorbidities also increases with age. Comorbidity is defined as having two or more medical conditions at the same time. The report shows that one-third of patients in this study population have comorbidities, with a higher frequency of comorbidities in patients with lung or colorectal cancer, and that survival is influenced by the presence of other medical conditions as well as the type of cancer, stage at diagnosis, and age.

The Report, produced annually since 1998, is co-authored by researchers from the National Cancer Institute (NCI) which is part of the National Institutes of Health; the American Cancer Society (ACS); the Centers for Disease Control and Prevention (CDC); and the North American Association of Central Cancer Registries (NAACCR). It appeared online in the journal Cancer on Dec. 16, 2013.

Death RatesThe latest Report includes mortality data through 2010, the most recent year for which complete data are available. It found that from 2001 through 2010, death rates for all cancers combined decreased by 1.8 percent per year among men and by 1.4 percent per year among women. Death rates among children 14 years of age and younger decreased by 1.9 percent per year. Death rates among men decreased for 11 of the 17 most common cancers (lung, prostate, colon and rectum, leukemia, non-Hodgkin lymphoma, esophagus, kidney, stomach, myeloma, oral cavity and pharynx, and larynx) and increased for melanoma of the skin, soft tissue cancers, and cancers of the pancreas and liver. During the same 10 year period, death rates among women decreased for 15 of the 18 most common cancers (lung, breast, colon and rectum, ovary, leukemia, non-Hodgkin lymphoma, brain, myeloma, kidney, stomach, cervix, bladder, esophagus, oral cavity and pharynx, and gallbladder) and increased for cancers of the uterus, pancreas, and liver.

“The sustained fall in death rates for most cancers is an important indicator of our success in controlling this large set of complex diseases but is not as fast as we’d like,” said NCI Director Harold Varmus, M.D. “In addition, the Report emphasizes the need to consider the entire health status of cancer patients since many have other significant medical conditions that may affect their survival.”

Incidence RatesCancer incidence rates, which track new cases, can vary based on a number of factors and are considered an important measure of disease burden, whereas mortality is the primary measure of progress in cancer control. Incidence rates may presage changes in mortality outcomes however. During the period of 2001-2010, overall cancer incidence rates decreased by 0.6 percent per year among men, were stable among women, and increased by 0.8 percent per year among children (ages 0 through 14 years), continuing trends from recent Annual Reports. During the 2001-2010 time period, incidence rates decreased for six of the 17 most common cancers among men (prostate, lung, colon and rectum, stomach, larynx, and brain and other nervous systems) and increased for eight others (kidney, pancreas, liver, non-Hodgkin lymphoma, thyroid, leukemia, melanoma of the skin, and myeloma). Among women, incidence rates decreased for six of the 18 most common cancers (colon and rectum, bladder, cervix, oral cavity and pharynx, ovary, and stomach), and increased for eight others (thyroid, melanoma of the skin, kidney, pancreas, leukemia, liver, myeloma and uterus). “Similar to death rates, the overall decrease in cancer incidence rates among men was driven in part by declines in lung cancer, mainly reflecting the success of tobacco control interventions,” said John R. Seffrin, Ph.D., chief executive officer of the American Cancer Society. “We are particularly heartened to see that in the most recent time period, from 2005 to 2010, lung cancer incidence rates dropped among women. Nonetheless, lung cancer remains by far the leading cause of cancer death in both men and women.”

Comorbidities and CancerThe special feature section of the report discusses the prevalence of comorbidities among Medicare beneficiaries with lung, colorectal, breast, and prostate cancer and how these conditions influence survival due to a person’s cancer and other illnesses. Forty percent of patients 66 years of age or older, with any of these four cancers, had at least one comorbidity. Measures of comorbidity can contribute to understanding how multiple diseases work together to affect outcomes. For cancer patients, incorporating comorbidity measures into treatment planning may lead to better decisions about the potential risks and benefits of treatment options.For this analysis, the authors linked cancer registry data from NCI with Medicare claims data that identified the presence of comorbidities in patients ages 66 or older, one year prior to their diagnosis of cancer. Cancer stage was included in this survival model because patients with late-stage cancer have higher death rates than those diagnosed with earlier stage cancer, even after accounting for comorbidity.

“More and more Americans are winning the battle against cancer and are living long, healthy, and productive lives,” said CDC Director Tom Frieden, M.D. “However, cancer patients with underlying health conditions, such as diabetes, have special challenges. It’s critical for health care providers to have the full picture of their patients’ health so they can provide the best treatment possible for the patient overall, and for their cancer.”

“Cancer rates are edging down for both new cases and for deaths, which is definitely good news,” noted NAACCR director Betsy Kohler. “But there are still too many cancer types that require a rededication of effort to help get those rates reversed so that we’re showing real progress for all forms of cancer.”###Reference: Edwards BK, et al. Annual Report to the Nation on the Status of Cancer, 1975-2010, Featuring Prevalence of Comorbidity and Impact on Survival among Persons with Lung, Colorectal, Breast or Prostate Cancer. Cancer. Online Dec. 16, 2013. DOI: 10.1002/cncr.28509. Online at www.wileyonlinelibrary.com/journal/cancer-report2014.

Additional Resources:For a Q&A on this Report, go to http://www.cancer.gov/newscenter/newsfromnci/2013/ReportNationDecemberQA.For Spanish translations of this press release and Q&A, go to http://www.cancer.gov/espanol/noticias/informeNacionDiciembre2013 and http://www.cancer.gov/espanol/noticias/informeNacionDiciembre2013QA. CDC’s Division of Cancer Prevention and Control: http://www.cdc.gov/cancer; National Program of Cancer Registries: http://www.cdc.gov/cancer/npcr; and the National Vital Statistics System: http://www.cdc.gov/nchs/nvss.htmACS: http://www.cancer.orgNCI: http://www.cancer.gov and SEER (NCI’s Surveillance, Epidemiology, and End Results program): http://www.seer.cancer.gov NAACCR: http://www.naaccr.orgThe National Cancer Institute leads the National Cancer Program and the NIH’s efforts to dramatically reduce the prevalence of cancer and improve the lives of cancer patients and their families, through research into prevention and cancer biology, the development of new interventions, and the training and mentoring of new researchers. For more information about cancer, please visit the NCI Web site at http://www.cancer.gov or call NCI's Cancer Information Service at 1-800-4-CANCER.The American Cancer Society saves lives and creates a world with less cancer and more birthdays by helping you stay well, helping you get well, by finding cures and fighting back. As the nation’s largest non-governmental investor in cancer research, contributing about $3.4 billion, we turn what we know about cancer into what we do. To learn more about us or to get help, call 1-800-227-2345 or visit www.cancer.orgCDC works 24/7 saving lives, protecting people from health threats, and saving money through prevention. Whether these threats are global or domestic, chronic or acute, curable or preventable, natural disaster or deliberate attack, CDC is the nation’s health protection agency.The North American Association of Central Cancer Registries, Inc. is a professional organization that develops and promotes uniform data standards for cancer registration; provides education and training; certifies population-based registries; aggregates and publishes data from central cancer registries; and promotes the use of cancer surveillance data and systems for cancer control and epidemiologic research, public health programs, and patient care to reduce the burden of cancer in North America. 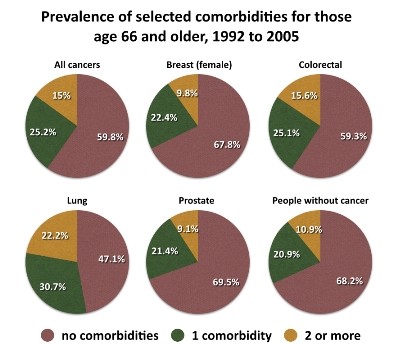 Caption: Measures of comorbidity can contribute to understanding how multiple diseases work together to affect outcomes. For cancer patients, incorporating comorbidity measures into treatment planning may lead to better decisions about the potential risks and benefits of treatment options.

The Annual Report to the Nation on the Status of Cancer Cancer Comorbidities Lung Cancer
COMMENTS | COMMENTING POLICY
close
1.09224