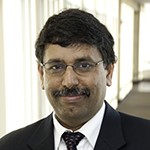 Ramaswamy Govindan, MD, of Washington University School of Medicine in St. Louis is a co-chair of The Cancer Genome Atlas lung cancer project.

Newswise — Studying the most common type of lung cancer, researchers have uncovered mutations in a cell-signaling pathway that plays a role in forming tumors. The new knowledge may expand treatments for patients because drugs targeting some of these genetic changes already are available or are in clinical trials.

Reporting July 9 in Nature, investigators from The Cancer Genome Atlas (TCGA), including researchers at Washington University School of Medicine in St. Louis, Harvard Medical School and other institutions, studied tumors from 230 patients with lung adenocarcinoma.

“This is the first time we have had a panoramic look at the genomic landscape of this many lung tumor specimens,” said oncologist Ramaswamy Govindan, MD, professor of medicine at Washington University and TCGA lung cancer project co-chair. “These studies reinforce the opinion that lung cancer is a very heterogeneous disease.”

Combined with an earlier study of 178 patients with lung squamous cell carcinoma, TCGA researchers now have published genetic data on about 400 lung cancer patients and are working to analyze tumors from 600 more. The investigators included scientists at The Genome Institute at Washington University and other major sequencing centers.

In the new study, among the myriad genetic changes observed in adenocarcinoma, one cell-signaling pathway stood out. About 75 percent of the samples had mutations that overactivated a pathway called RTK/RAS/RAF, known for roles in tumor growth.

“It is remarkable how important the RTK/RAS/RAF pathway appears to be,” said Govindan, who treats patients at Siteman Cancer Center at Barnes-Jewish Hospital and Washington University School of Medicine. “Mutations in this particular pathway promote cancer cell proliferation. What is amazing is how many ways this pathway can be activated.

“We also know these tumors are not static,” he added. “They evolve. We have to be looking at multiple biopsies over time to see how the tumor cells escape, inhibiting one pathway and becoming resistant to therapies.”

The researchers also found other relevant mutations in important genes such as EGFR, NF1, NF2 and MET. Such findings could be valuable to a clinical trial known as ALCHEMIST (Adjuvant Lung Cancer Enrichment Marker Identification and Sequencing Trial) that Govindan is leading. The trial will involve the screening of tumors from several thousand lung cancer patients for alterations in genes called EGFR and ALK. After surgery to remove their tumors, these patients will be invited to participate in clinical trials studying drugs targeting these dysfunctional genes.

“Patients with lung cancer often have substantial tobacco exposure, which leads to a lot of mutations,” Govindan said. “We may not be able to find significant mutations unless we study multiple samples from several thousand patients.”

Despite such progress in understanding lung cancer — the most common cause of cancer deaths worldwide — the investigators emphasize that the best way to reduce lung cancer deaths is to help people stop smoking and encourage others to never start.

Siteman Cancer Center, the only National Cancer Institute-designated Comprehensive Cancer Center in Missouri, is ranked among the top cancer facilities in the nation by U.S. News & World Report. Comprising the cancer research, prevention and treatment programs of Barnes-Jewish Hospital and Washington University School of Medicine, Siteman is also Missouri’s only member of the National Comprehensive Cancer Network.