28-Aug-2018 10:05 AM EDT, by National Institute of Biomedical Imaging and Bioengineering
favorite_border

Newswise — Pulmonary fibrosis is one of the most common and serious types of lung disease. Now NIBIB-funded researchers have developed an in vitro lung tissue-on-a-chip system that mimics lung fibrosis, offering rapid testing of potential new anti-fibrotic treatments.

Pulmonary fibrosis is characterized by progressive lung stiffness and scarring. It is estimated that close to 200,000 individuals are affected in the U.S. with more than  five million affected worldwide. Half of affected individuals die within five years of diagnosis. The progressive tissue stiffening in fibrosis is also a significant factor in heart failure, liver cirrhosis, and kidney disease.

The lung scarring that occurs in pulmonary fibrosis is irreversible and there is no treatment that can fully stop disease progression. Currently, only two drugs can help slow the disease process, pirfenidone and nintedanib.  A number of new candidate therapies that could stop or even reverse the process have been identified. However, testing them is difficult and expensive because of the slow development of the disease in animal models or human clinical trials.

To address this problem a team of bioengineers from the State University of New York at Buffalo, and the University of Toronto in Canada have developed a lung tissue-on-a chip system that has properties of fibrotic lung tissue. The development of the unique microtissue system as a platform for testing anti-fibrosis treatments was funded by the National Institute of Biomedical Imaging and Bioengineering (NIBIB) and is reported in the journal Nature Communications.

The researchers used microlithography to print arrays of miniscule squares, with micropillars about the thickness of a human hair placed around the edges of each individual square. They devised a way to grow lung alveolar tissue—the small sacs that fill with air in the lungs—so that the tissue is stretched like a trampoline over the micropillars.

The microtissues were treated with TGF-beta, which causes the tissue to contract and stiffen. This mimics the stiffening of the lung alveolar tissue in people who suffer from the disease, and bends the micropillars, which can be observed under a microscope. The result is a microtissue model of lung fibrosis.

Relaxation of the fibrotic bending of the micropillars following treatment with pirfenidone and nintedanib confirmed that the system is a reliable model of lung fibrosis, which responds to drug treatment.

“We expect our system to speed the translation of anti-fibrotic therapies from laboratories to the clinic,” said senior author Ruogang Zhao, Ph.D., assistant professor in the Department of Biomedical Engineering at the University at Buffalo.  “We are now adapting the system to model the pathology of other membrane diseases such as fibrosis in the retina and intestinal fibrosis associated with Crohn’s disease.” 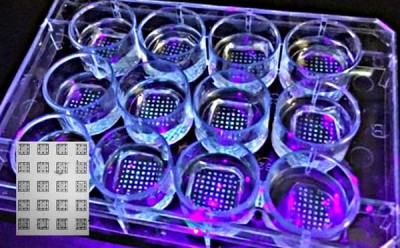