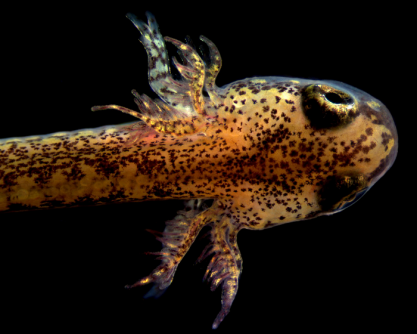 Newswise — Lungs are essential to many vertebrates including humans. However, four living amphibian clades have independently eliminated pulmonary respiration and lack lungs, breathing primarily through their wet skin. Little is known of the developmental basis of lung loss in these clades.

In a new study in Science Advances researchers in the Department of Organismic and Evolutionary Biology and the Museum of Comparative Zoology at Harvard University examined the Plethodontidae, a dominant family of salamanders, all of which are lungless as adults, and find they actually do develop lungs as embryos shedding light on the evolution of lung loss over millions of years.

The lungless salamander family Plethodontidae is the most species-rich family of salamanders accounting for more than two-thirds of existing salamander diversity. All adult plethondontids are lungless, breathing entirely through nonpulmonary tissues, mainly the skin and the mucus membranes in the mouth and throat. Lung loss has occurred independently at least four times among distantly related amphibians and there are other instances of lung reduction or loss in both amphibians and some vertebrates. The developmental reason for this loss, however, remains a mystery.

“Clearly lungless salamanders do fine without lungs given that they make up about two-thirds of all salamander species,” said lead author Zachary R. Lewis, former doctoral candidate (PhD ’16), “perhaps losing lungs enabled, rather than hindered, this remarkable evolutionary success.”

This study builds on Lewis’s doctoral work in senior author Professor James Hanken’s lab. Lewis, Hanken, and co-author Associate Professor Ryan Kerney, Gettysburg College, employed histology and micro-CT to examine the morphology of lung development in both lung and lungless salamanders. They found that lungless salamanders begin developing lungs as embryos in much the same way as species with lungs develop them. The researchers then used in situ hybridization and RNA-sequencing to show that the structure that forms during lungless salamander embryonic development resembles a lung not just morphologically, but also in terms of the molecules expressed.

The researchers hypothesize that lung development ceases in these species due to a lack of cues that maintain lung development which arise from the tissue, mesenchyme, that surrounds the lung as it develops.

The study also confirms Amy Grace Mekeel’s 1936 doctoral thesis that challenged the leading theory put forth by biologists that the slight fold in the adult pharynx is a vestigial lung which persisted since the initial lung loss of the plethodontids. Mekeel described a “lung rudiment” that formed in the embryo, but was lost by the time it hatched.

The study reveals that lung developmental-genetic pathways are at least partially conserved despite the absence of functional adult lungs for at least 25 and possibly exceeding 60 million years. Understanding the evolution of lung loss in Plethondontidae could also shed light on organ loss in other vertebrates.

“In the future, if these genetic mechanisms are revealed, we will have a more complete understanding of how evolution acts to do away with an organ such as the lung, which was long thought critical to achieving life on land,” said Lewis who is currently a scientist with NanoString Technologies.

The authors would like to thank the Museum of Comparative Zoology Department of Herpetology for assisting in collection trips. Funding was provided by the National Science Foundation (NSF) Graduate Research Fellowship; NSF DBI-1702263 and EF-0334846; Museum of Comparative Zoology’s Kenneth Miyata Grant, Robert G. Goelet Summer Research Award, and the Wetmore-Colles Fund.