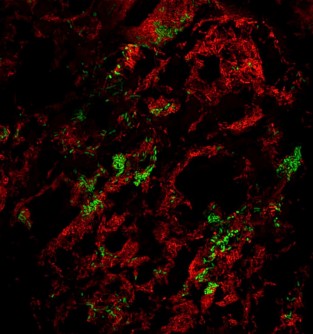 Virulent Y. pestis bacteria (red) quickly establish a permissive environment for the growth of non-virulent microbes (green) that would normally be eliminated by lung’s immune mechanisms.

New research from the University of North Carolina at Chapel Hill School of Medicine has opened a door to the answer. Researchers led by William E. Goldman, PhD, professor and chair of microbiology and immunology at the University of North Carolina at Chapel Hilland a leading authority on Y. pestis, show that the plague bacteria transform the lungs from a nasty place for microbes into a playground for them to flourish.

The research appears online in the Proceedings of the National Academy of Sciences during the week of Monday Jan. 30, 2012.

Goldman notes that most other microbes that infect the lungs trigger an antimicrobial response within a few hours after infection. This early inflammatory response is generally sufficient to eliminate microorganisms with no more than mild respiratory symptoms. Not so with Y. pestis; for about 36 hours, the lungs are “quiet,” not inflamed, and symptoms are completely absent.

But in the first 36 hours of infection, plague bacteria are having a field day, growing and reproducing rapidly – 2-fold, 100-fold, 100,000-fold – and all of that without outward disease symptoms or measurable changes in lung tissue.

“And then, rather abruptly, symptoms start to appear,” Goldman says. “They progress rapidly to the point where you realize this is not just a cold, this is not just the flu. But by then the disease has progressed too far for effective medical intervention, and death is likely within the next day or two.”

And once people have pneumonic plague, the bacteria can spread via respiratory droplets to others who have close contact with them. The U.S. Centers for Disease Control and Prevention notes that during the delay between being exposed to Y. pestis and becoming seriously sick, people could travel over a large area, possibly infecting others, which could make the infection more difficult to control.

“Here’s the question we wanted to answer: Is the organism avoiding detection or is it actually suppressing the immune responses of the lung?” Goldman said. “The paper is really about the experiments designed to distinguish between these possibilities. And the answer we found suggests the latter.”

In their “co-infection” experiments, the UNC study team mixed together a fully virulent Y. pestis strain and a mutant strain known not to be infectious in that it lacked the components essential for it to be a pathogen. The mix was then given to a single laboratory animal.

And then the study team tried other microbes, different lung pathogens and an assortment of random microbes - “including the sort of organisms you inhale all the time and that are disposed of easily by the lungs’ standard defense mechanisms. But as long as the virulent bacteria were present, the non-virulent organisms would grow,” Goldman said.

“There is no other microbe that does that, no other inhaled organism that in a matter of minutes or hours transforms the lung into such a permissive environment for microbial proliferation,” he added.

Goldman points out that not much evolutionary distance exists between Yersinia pestis and its closest ancestor, Yersinia pseudotuberculosis, which causes a much milder disease.

“Our work shows that of these two species, only Y. pestis has the ability to transform the lung into an environment that permits an extended period of unrestricted microbial proliferation with no symptoms. Looking at the genetic differences between these two species may reveal the mechanism responsible for this phenomenon exclusive to Y. pestis, and that may lead to new therapeutic strategies for pneumonic plague.”

UNC study coauthors were graduate student Paul A. Price, and Jianping Jin, PhD, of the UNC Center for Bioinformatics.

Support for the research came from a National Institutes of Health grant to the Southeastern Regional Center of Excellence for Emerging Infections and Biodefense.