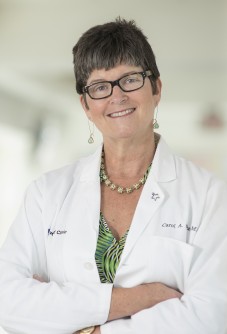 According to Dr. Burke, up to approximately 1 million Americans are estimated to live with Lynch Syndrome, and it is believed that as many as 500,000 Lynch Syndrome carriers have no idea they are at risk of disease.

“Physicians should be reminded on this day to redouble our efforts to create opportunities in our practice to make a proactive diagnosis of Lynch Syndrome by utilizing simple and directed family cancer history taking, ensuring that all colorectal cancers in our patients are tested for evidence of microsatellite instability, a hallmark of Lynch Syndrome, seeing that appropriate patients and families are offered genetic testing, and providing them with the education and management schema to prevent death from Lynch Syndrome-related cancers,” Dr. Burke advised.

“Prevention of the occurrence and death from some of these cancers due to Lynch Syndrome is possible with recognition of the syndrome and preventive strategies, such as colonoscopy and prophylactic surgery,” she added.

About Lynch SyndromeLynch Syndrome, named after Dr. Henry T. Lynch who characterized the syndrome in 1966, is an autosomal dominant hereditary cancer syndrome. It is caused by a germline mutation in one of the DNA mismatch repair (MMR) or EPCAM genes.

Importance of Molecular and Genetic TestingData show that the family history alone is not accurate enough to select which patients should be tested for Lynch Syndrome. Some studies have shown that up to 40 percent of patients with Lynch Syndrome do not meet clinical criteria for the syndrome. In her commentary, Dr. Burke emphasizes that molecular and genetic testing is required to make the diagnosis of Lynch Syndrome.

Currently, the national recommendation is that all colorectal cancer tumors should be tested for evidence of MMR deficiency to reveal Lynch Syndrome. This is called “universal testing” and is endorsed by many organizations and agencies.

Dr. Burke offers a warning to her fellow gastroenterologists, “Be sure your Lynch Syndrome patients know that this is a ‘family business’ and provide them with recommendations to share with their family members, a lifesaving gesture!”

About the American College of Gastroenterology: Founded in 1932, the American College of Gastroenterology (ACG) is an organization with an international membership of more than 14,000 individuals from 85 countries. The College's vision is to be the pre-eminent professional organization that champions the evolving needs of clinicians in the delivery of high-quality, evidence-based and compassionate health care to gastroenterology patients. The mission of the College is to advance world-class care for patients with gastrointestinal disorders through excellence, innovation and advocacy in the areas of scientific investigation, education, prevention and treatment. www.gi.org. For more information on colorectal cancer screening, gi.org/ColonCancer. Follow ACG on Twitter @AmCollegeGastro.