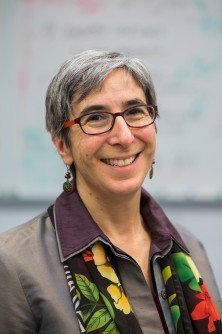 The Association for Computing Machinery (ACM) has named Lynn Andrea Stein a 2018 Distinguished Member. Stein was recognized for educational innovations, including her work as one of Olin’s founding faculty members and her leadership of what is now Olin’s Collaboratory. Stein’s contributions are grounded in her scholarship on the philosophical foundations of computing and its applications.

Just 49 academics and professionals around the world earned the distinction. According to a statement by ACM President Cherri M. Pancake, the Members are “exemplars in their field” and are named for their “…major achievements in computer engineering, education and science.”

A full list of the 2018 Distinguished Members can be found here.

Stein is a professor of Computer and Cognitive Science at Olin College.  “I am deeply honored to receive this recognition from my peers and my professional organization,” said Stein. “To be named along with these outstanding individuals, who represent the very best of our field, is a true privilege.”

Stein recently spent a year at Dartmouth College where she immersed herself with the executive team as an American Council on Education (ACE) Fellow. The ACE Fellows Program is the country’s premier higher education leadership development program. It is designed to identify and prepare promising senior faculty and administrators for senior leadership positions in college and university administration.

In August, Stein returned to the Olin campus where she has previously served as Associate Dean, inaugural Director of the Collaboratory, and a special advisor to the Provost, in addition to her role on the faculty for the past 19 years. Stein led the creation of Olin’s Collaboratory, which expanded and formalized Olin’s capacity for transforming engineering education in America and throughout the world. She and her colleagues pioneered workshop programs and co-design partnerships that now involve the majority of Olin’s faculty, many students and staff, and hundreds of universities around the world.