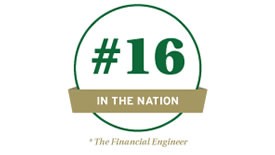 Newswise — CHARLOTTE, N.C. – Oct. 27, 2017 – UNC Charlotte’s Master of Science in Mathematical Finance program is again named one of the top programs in the nation, ranking No. 16 in TFE Times’ 2018 Master of Financial Engineering program rankings.

During the past two years, the Belk College of Business M.S. in Mathematical Finance program has consistently risen in the rankings, increasing from No. 20 in 2016, to No. 18 in 2017 and now to the No. 16 program in the United States according to TFE Times (formerly The Financial Engineer).

“We are very proud that our outstanding Mathematical Finance program has again been recognized as one of the very best in the nation,” said Dolly King, associate dean for research and graduate programs in the Belk College of Business. “The program’s integrated curriculum gives students a broad understanding of financial modeling and the mathematical skills to identify, measure and manage risk, which leads them to successful careers as alumni.”

TFE Times’ rankings are the most comprehensive rankings for graduate financial engineering, financial mathematics, quantitative finance, computational finance and mathematical finance programs in the United States. The rankings are calculated based on a series of factors, including average GRE scores, starting salaries, undergraduate GPA, acceptance rates and the number of employed graduates.

“Graduates of this program are bringing added value to the global financial services industry, especially here in Charlotte,” King added. “This recognition is reflective of their success and the competitiveness of this program, which we have built in partnership with leading corporations in the region.”

Graduates of the M.S. in Mathematical Finance program with previous employment gained an average $25,201 in salary and have an average salary of $93,407. Ninety percent of domestic students were employed or in graduate school within six to nine months after graduation. Recent alumni work for companies such as Bank of America, the Federal Reserve Bank, J.P. Morgan, KPMG, TIAA and Wells Fargo Securities, to name a few.