M6P Deficiency Leaves B Cells Out of Sorts 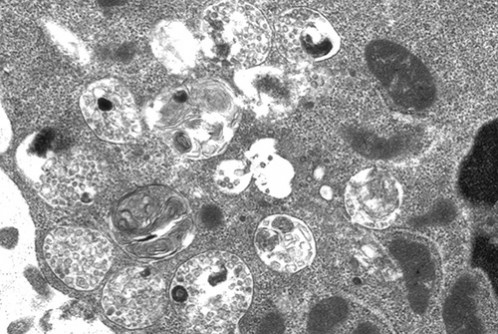 In a B cell from a mouse that mimics symptoms of mucolipidosis II patients, lysosomes are packed with undigested material.

Newswise — A group of white blood cells known as B cells, which play a key role in the human immune response, need a protein-targeting signal called mannose 6-phosphate (M6P) in order to proliferate, differentiate, and present immune cell–activating antigens, according to a study in The Journal of Cell Biology.

Immune cells slice up antigens in organelles called lysosomes and attach the fragments to complexes that display them on the cell surface in order for these peptides to bind and activate other immune cells. To ensure that they can cut up the antigens, cells steer newly made enzymes to lysosomes by tagging them with M6P molecules. In the rare disease mucolipidosis II, patients can’t synthesize M6P, and their lysosomes fill up with undigested molecular junk known as storage material.

To find out how loss of M6P affects different kinds of immune cells, researchers in Germany used mutant mice that mimic symptoms of mucolipidosis II patients. The animals’ B cells were abnormal. Their lysosomes bulged with storage material, and they were poor at dismembering antigens and breaking down a protein that prevents the presentation of antigen fragments. The researchers also found that key processes related to maturation, proliferation, and differentiation were impaired in B cells from the mutant mice, and the cells were defective and produced fewer antibodies than normal. Importantly, they confirmed that B cells from patients with the disease present similar defects in antibody synthesis.

However, the authors discovered that other types of immune cells in these mice, such as dendritic cells and T cells, weren’t as severely affected. The findings therefore indicate that B cells are more dependent on M6P than are other immune cells. The enzymes in these other cells presumably reach the lysosome through M6P-independent pathways. In addition, these data may explain why patients with mucolipidosis II suffer from recurrent infections.

Research reported in the press release was supported by the Japan Society for the Promotion of Science and Deutsche Forschungsgemeinschaft.