Machine Learning May Help in Early Identification of Severe Sepsis 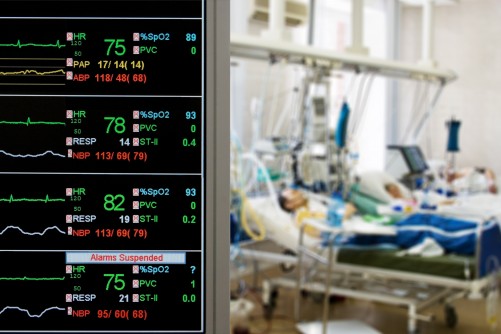 Session:  D15 Critical Care:  Do We Have a Crystal Ball? Predicting Clinical Deterioration and Outcome in Critically Ill Patients

Newswise — ATS 2017, WASHINGTON, DC ─ A machine-learning algorithm has the capability to identify hospitalized patients at risk for severe sepsis and septic shock using data from electronic health records (EHRs), according to a study presented at the 2017 American Thoracic Society International Conference.  Sepsis is an extreme systemic response to infection, which can be life-threatening in its advanced stages of severe sepsis and septic shock, if left untreated.

“We have developed and validated the first machine-learning algorithm to predict severe sepsis and septic shock in a large academic multi-hospital healthcare system,” said lead author Heather Giannini, MD, of the Hospital of the University of Pennsylvania. “This is a breakthrough in the use of machine learning technology, and could change the paradigm in early intervention in sepsis.”

Machine learning is a type of artificial intelligence that provides computers with the ability to learn complex patterns in data without being explicitly programmed, unlike simpler rule-based systems. Earlier studies have used electronic health record data to trigger alerts to detect clinical deterioration in general.

The researchers developed a machine-learning algorithm to predict patients most at risk for severe sepsis or septic shock, and to use their electronic health record to alert the care team.  To develop the algorithm, they trained a random forest classifier, an approach to classify a wide range of data, to sort through electronic health record data for 162,212 patients discharged between July 2011 and June 2014 from three University of Pennsylvania Health System acute care hospitals.  The algorithm was able to examine hundreds of variables on a continuous basis.  Patients with severe sepsis or septic shock were labeled as such 12 hours before the actual onset of severe sepsis or septic shock.  The onset was determined based on lab results and physiological data, such as blood pressure.  A total of 943 patients in the database met the assigned lab or physiological criteria.

The algorithm was validated in real time between October and December 2015 with 10,448 patients while they were cared for in the study hospitals, using a “silent mode” of electronic health record sampling.

Approximately 3 percent of all acute care patients screened as positive, and 10 alerts were sent each day across the three hospitals.

“We were hoping to identify severe sepsis or sepic shock when it was early enough to intervene and before any deterioration started,” said senior author Craig Umscheid, MD, of the Hospital of the University of Pennsylvania. “The algorithm was able to do this.  This is a breakthrough in showing that machine learning can accurately identify those at risk of severe sepsis and septic shock.”

Dr. Umscheid added that the next steps are to examine process and outcome changes resulting from the use of this machine-learning algorithm, and to see if the algorithm has an impact in clinical practice.

Rationale: Sepsis continues to be a leading cause of death among hospitalized patients. Early detection of sepsis has the potential to reduce mortality by facilitating timely implementation of evidence-based interventions. Past studies have utilized EHR data to trigger alerts at the actual onset of sepsis, or have described alerts designed to more generally predict clinical deterioration. Here, we describe the development and validation of the first machine learning algorithm created to predict severe sepsis or septic shock in a large academic multi-hospital healthcare system.

Methods: We developed and deployed a real-time machine-learning algorithm to predict patients at elevated risk of developing severe sepsis and/or septic shock. We trained a random forest classifier using EHR data (such as labs, vitals, and demographics) from patients discharged between July 2011 and June 2014 from any of the three acute care hospitals in the University of Pennsylvania Health System (n=162,212 discharges). Positive cases were defined as having ICD9 codes '995.92' (Severe Sepsis) or '785.52' (Septic Shock). Encounter data was sampled hourly and positive cases were labeled 12 hours before clinical onset of severe sepsis or septic shock. Onset was defined as the drawn time of a positive blood culture in conjunction with either a lactate > 2.2 mmol/L or a systolic blood pressure < 90 mm Hg. A total of 943 patients in our training set met the lab or physiological criteria and were coded with Severe Sepsis or Septic Shock. We validated the resulting algorithm by deploying it into the production environment in a “silent mode” between October – December 2015 (n=10,448 discharges, alerts=314). Test characteristics and predictive values were estimated using data from this time period.

Conclusion: A machine-learning algorithm has the capability to continuously sample real-time EHR data to prospectively identify patients at risk for severe sepsis and septic shock, enabling additional monitoring and early intervention in this vulnerable patient population. Next steps will include the examination of process and outcome changes associated with the implementation of this machine-learning algorithm.