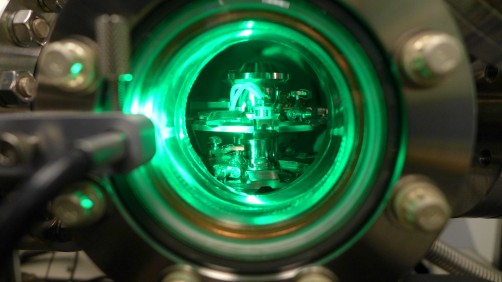 Samples are readied for analysis in an advanced atom probe invented in the 1990s by Thomas Kelly, when he was a professor of materials science and engineering at the University of Wisconsin–Madison. The probes, produced by scientific instrument maker CAMECA in Fitchburg, Wis., can measure the atomic composition of ultra-small samples. The precision instruments are sold around the world to researchers in government, industry and academia.

NOTE: A high-resolution photo to accompany this release is available at http://www.news.wisc.edu/newsphotos/atomProbe2014.html

Newswise — MADISON, Wis. — It's a scientific axiom: big claims require extra-solid evidence. So there were skeptics in 2001 when University of Wisconsin-Madison geoscience professor John Valley dated an ancient crystal found in Australia to 4.4 billion years ago. The date, after all, was only 100 million years after Earth started to solidify from a ball of molten rock.

Skeptics questioned the dating, saying the instrument used to count atoms looked too broadly at the tiny crystal, called a zircon. Then, in 2013, Valley's colleagues at CAMECA, a scientific instrument maker with an American headquarters in Fitchburg, Wis., put the zircon inside an ultra-precise atom probe and, Valley says, got "data that answered the most serious of the challenges going back to 2001."

The concept for the atom probe dates to the 1930s, says Thomas Kelly, who was a professor of materials science and engineering at UW-Madison for 18 years. In the 1980s, he heard George Smith at Oxford University describe his advances with the technology, and "sat there with my jaw dropping."

An atom probe uses a strong electric field to draw ionized atoms from a tiny needle of the sample material. As the atoms are electrically attracted to a positive electrode, the machine measures how long each atom needs to travel that short distance, and then calculates its mass and thus its identity.

The modern, made-in-Wisconsin atom probe that Valley used to pin down the age of the oldest crystal can measure individual atoms in a circle 100 billionths of a meter in diameter — far thinner than a human hair.

In 1989, Kelly brought some steel samples to Smith for analysis, only to learn that the revolutionary 3-D atom probe would need a week to measure the million atoms needed for the analysis. That gave him time to think up a better way, and he decided that stimulating the sample with an electron beam would increase the collection rate.

"I thought this could work,” Kelly says, “so a couple of my students changed what they were doing and began to calculate the properties of an atom probe that was pulsed at a high rate with an electron beam. Eventually, we switched to lasers and a new electrode geometry.”

By 1999, Kelly had the foundations for a company, which he called Imago, and in 2001 he resigned his tenured position at UW-Madison. Imago acquired exclusive licenses for Kelly's patents, which had been assigned to the Wisconsin Alumni Research Foundation.

There were the obvious difficulties, especially in getting enough investment to sustain the company. Looking back from the vantage point of 2014, Kelly says, "It's fair to say this product has revolutionized atom probe technology. Most major universities with a microscopy center would like to have an atom probe. A decade ago, I would have to spend 10 minutes at a meeting, explaining what an atom probe is; that's no longer necessary."

In 2010, Imago was sold to Ametek, a Philadelphia firm, which already owned CAMECA, headquartered in Paris. CAMECA's Fitchburg location employs about 50 people — more than half of whom are UW-Madison graduates — designing, making and selling the probes. As an Ametek vice-president, Kelly directs long-range research at Fitchburg.

Institutions that buy the $2.5 million instruments need to know atomic compositions at tiny scales, and include Kelly's old department, the UW-Madison Department of Materials Science and Engineering, where Kelly is an honorary fellow. Leading computer chip makers, including Samsung, IBM and Intel, have also bought the probes.

"Semiconductor makers are at an early stage of learning how this can be valuable to them," Kelly says. "We could see sales dramatically increase in semiconductors, especially as they continue to decrease the size of features on chips."

With customers around the world, and corporate headquarters in Philadelphia, why is CAMECA still on the outskirts of Madison? "I learned from venture capitalists long ago that the company is the people. If you try move a company like this, maybe 30 percent move. People have family here, a life here, and they are not all going to pick that up."