As part of the fifth annual Albright Institute, the first female U.S. Secretary of State joins former EPA head, Carol Browner to give public talk on the politics of global climate change

Newswise — Wellesley, Mass., December 18, 2013—This January, former U.S. Secretary of State Madeleine Korbel Albright will return to her alma mater to meet with 40 promising Wellesley students selected as this year’s Albright Fellows. These young women will spend their winter break learning the ropes on how to change the world from Secretary Albright and an all-star faculty roster of influential leaders, academics, policymakers, business executives, and journalists. The 2014 Albright Institute Wintersession Program begins on January 6, 2014 and runs through January 24, 2014.

"We are witnessing a generational change in the American political scene," said Madeleine Korbel Albright, a member of the Wellesley College class of 1959, at the launch of the first Institute in 2010. "This is the right time—and Wellesley is the right place—to help train a whole new group of young women leaders."

The Albright Institute Wintersession is an intensive, three-week course held each January. Albright Fellows learn from the expertise and perspectives of faculty and thought leaders who represent a wide variety of fields including science, engineering, sociology, political science, arts and literature, and economics. The topics on this year’s syllabus include:

• Why Women’s Leadership is the Cause of Our Times• The Olympic Movement: Women's Sports Participation and its Global Impact• Bombs Away: Cluster Munitions, Killer Robots, and Humanitarian Disarmament• Why Good People Do Bad Environmental Things

Drawing from what they learn during expert presentations and from their own multidisciplinary studies at Wellesley, the Fellows team up in groups to develop and propose innovative solutions to world problems. They will present their work to the Institute’s Distinguished Visiting Professor for critique and analysis in the final week of the Institute.

The 2014 Distinguished Visiting Professor is Carol Browner, former director of the White House Office of Energy and Climate Change Policy and former Environmental Protection Agency Administrator. Albright and Browner, who served together in the Clinton administration, will give a free, public lecture discussing “The Politics of Climate Change” on Wednesday, January 22 at 4 p.m. The event will be streamed live online at: http://web.wellesley.edu/PublicAffairs/Live/ 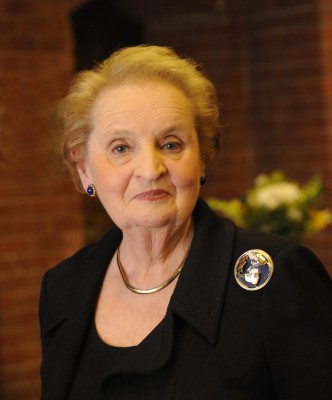 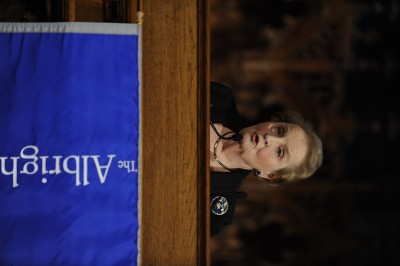