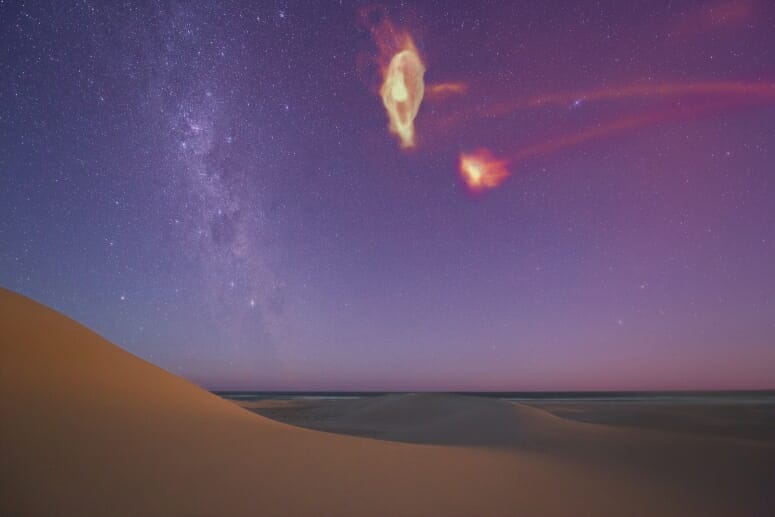 A view of the gas in the Magellanic System as it would appear in the night sky. This image, taken directly from the numerical simulations, has been modified slightly for aesthetics.

Newswise — MADISON, Wis. — Our galaxy is not alone. Swirling around the Milky Way are several smaller, dwarf galaxies — the biggest of which are the Small and Large Magellanic Clouds, visible in the night sky of the Southern Hemisphere.

During their dance around the Milky Way over billions of years, the Magellanic Clouds’ gravity has ripped from each of them an enormous arc of gas — the Magellanic Stream. The stream helps tell the history of how the Milky Way and its closest galaxies came to be and what their future looks like.

New astronomical models developed by scientists at the University of Wisconsin–Madison and the Space Telescope Science Institute recreate the birth of the Magellanic Stream over the last 3.5 billion years. Using the latest data on the structure of the gas, the researchers discovered that the stream may be five times closer to Earth than previously thought.

The findings suggest that the stream may collide with the Milky Way far sooner than expected, helping fuel new star formation in our galaxy.

“The Magellanic Stream origin has been a big mystery for the last 50 years. We proposed a new solution with our models,” says Scott Lucchini, a graduate student in physics at UW–Madison and lead author of the paper. “The surprising part was that the models brought the stream much closer to the Milky Way.”

The new models also provide a precise prediction of where to find the stream’s stars. These stars would have been ripped from their parent galaxies with the rest of the stream’s gas, but only a few have been tentatively identified. Future telescope observations might finally spot the stars and confirm the new reconstruction of the stream’s origin is correct.

“It’s shifting the paradigm of the stream,” says Lucchini. “Some have thought the stars are too faint to see because they’re too far away. But we now see that the stream is basically at the outer part of the disk of the Milky Way.”

That’s close enough to spot, says Elena D’Onghia, a professor of astronomy at UW–Madison and supervisor of the project. “With the current facilities we should be able to find the stars. That’s exciting,” she says.

The latest work was based both on fresh data and different assumptions about the history of the Magellanic Clouds and Stream. In 2020, the research team predicted that the stream is enveloped by a large corona of warm gas. So, they plugged this new corona into their simulations, while also accounting for a new model of the dwarf galaxies that suggests they have a relatively brief history of orbiting one another — a mere 3 billion years or so.

“Adding the corona to the problem changed the orbital history of the clouds,” Lucchini explains.

The opposite-direction orbit pushed and pulled the stream so it arced toward Earth, rather than stretching farther away into intergalactic space. The stream’s closest approach is likely to be just 20 kiloparsecs from Earth, or about 65,000 light-years away. The clouds themselves sit between 55 and 60 kiloparsecs away.

“The revised distance changes our understanding of the stream. It means our estimates of many of the stream’s properties, such as mass and density, will need to be revised,” says Fox.

If the stream is this close, then it likely has just one-fifth the mass previously thought. The closer approach of the stream also means this gas will start merging with the Milky Way in about 50 million years, providing the fresh material needed to jump-start the birth of new stars in the galaxy.

The stars in the Magellanic Stream itself have eluded researchers for decades. But the new study suggests that perhaps they were simply looking in the wrong place.

“This model tells us exactly where the stars should be,” says D’Onghia.