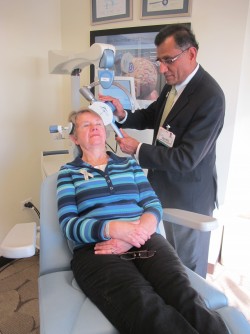 Nearly 300 centers in the United States now offer the treatment, called transcranial magnetic stimulation (TMS). The treatment sends short pulses of magnetic fields to the brain. At Loyola, about two-thirds of Rao's TMS patients so far report that their depression has significantly lessened or gone away completely.

Before receiving TMS, Nan Miller had failed nine antidepressants and suffered increasingly severe cycles of depression over seven years. There were times when she couldn't get out of bed or eat. "I just wanted to die," she said. She had even tried electroconvulsive therapy (formerly known as electroshock), but did not want to consider that option anymore.Miller said that a few weeks after beginning TMS treatments, she was eating lunch when she suddenly realized depression did not consume her any more. "I could almost hear the chains breaking, the darkness lifting and the heaviness dissolving," she said. "I feel about 10 years younger and 20 shades lighter."

The Food and Drug Administration approved TMS in 2009 for patients who have major depression and have failed at least one antidepressant. The FDA has approved one TMS system, NeuroStar®, made by Neuronetics.

The patient reclines in a comfortable padded chair. A magnetic coil, placed next to the left side of the head, sends short pulses of magnetic fields to the surface of the brain. This produces currents that stimulate brain cells. The currents, in turn, affect mood-regulatory circuits deeper in the brain. The resulting changes in the brain appear to be beneficial to patients who suffer depression.

The treatments do not require anesthesia or sedation. Afterward, a patient can immediately resume normal activities, including driving. Studies have found that patients do not experience memory loss or seizures. Side effects include mild headache or tingling in the scalp, which can be treated with Tylenol.

Together, psychotherapy and antidepressants successfully treat only about one-third of patients who suffer major depression. TMS is a noninvasive treatment option now available for the other two-thirds of patients, who experience only partial relief from depression or no relief at all, Rao said.

Dr. Rao is chair of the Department of Psychiatry and Behavioral Neurosciences of Loyola University Chicago Stritch School of Medicine.