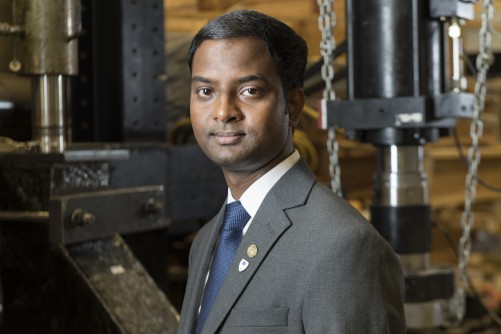 Newswise — MORGANTOWN, W.Va.—A doctoral student in civil engineering at West Virginia University is a finalist in the Collegiate Inventors Competition, an annual competition that rewards innovations, discoveries and research by college and university students and their faculty advisors.

Praveen Majjigapu will present his invention — NextGen Structural Rehab System — to a panel of final-round judges composed of National Inventors Hall of Fame inductees and U.S. Patent and Trademark Office experts in Washington, D.C., on November 2. A public expo and the awards ceremony will be held on November 3 at USPTO headquarters.

“I’m deeply honored that my invention is a finalist for this prestigious competition,” said Majjigapu. “One thing I love about being a finalist is that you get to present your research to some of the greatest minds and innovators in the nation. This can provide me with real-world feedback for advancing the invention to the next level.

“I hope to show my competitors that Mountaineers do ‘Go First’ by finishing first.”

The NextGen Structural Rehab System is a three-piece system consisting of filler modules — wedge-like parts made to certain specifications — reinforcing dowels and composite materials allows buildings and bridges to resist heavier loads and provides a significant amount of shock absorption as well as moisture and fire resistance. The patented system will increase the strength and endurance of structures in earthquakes, hurricanes, tornadoes and other large blasts, helping communities prevent catastrophe. The system is also beneficial for repairing historic or aging structures.

“When you look at hurricanes Harvey and Irma, as well as the earthquake that recently devastated parts of Mexico, you can quickly see how a solution such as this could have saved lives and preserved many of the structures that were affected,” said Majjigapu.

This is the latest in a long list of prestigious awards for scholarly achievements and leadership earned by Majjigapu. He holds the WVU Outstanding Merit Doctoral Fellowship, the Maurice and JoAnn Wadsworth Doctoral Fellowship and the Kenneth D. Gray Leadership Award, WVU’s highest honor for student leaders. On the national level, he received the President’s Volunteer Service Award and the Eye Foundation of America’s Outstanding Leadership Award. Earlier this year, he was named inaugural national chair of the Structural Engineering Institute Graduate Student Chapter Leadership Council and was nominated for the 2017 James Dyson Award, which is given annually to outstanding design engineers.

Majjigapu, who is advised by Hota GangaRao, the Maurice A. and Joann Wadsworth Distinguished Professor of Civil and Environmental Engineering and director of the Constructed Facilities Center in the Statler College of Engineering and Mineral Resources, is one of six graduate students to be selected as a finalist. Other schools represented in the category include California Institute of Technology, MIT and North Carolina State University. Winners and their advisors will be awarded cash and prizes ranging from $2,500-$10,000.

“It is an honor to represent WVU’s Statler College along with Cal Tech and MIT and certainly my alma mater, NCSU, In this competition. But it is humbling to note that the judges have recognized the importance of our invention in the sense that it would save many lives and structures under extreme loading conditions including hurricane forces and earthquakes,” said GangaRao. “Praveen should be commended for his hard work and tenacity to move our concept to a point of mass production and field installation in the next few months. Production of spacer blocks, the central piece of our invention, if undertaken in West Virginia, would create a number of high-paying jobs in the state.”

Established in 1990, the Collegiate Inventors Competition is a program of the National Inventors Hall of Fame and is sponsored by the USPTO, Arrow Electronics, Bridgestone Americas and Skild. The competition has awarded more than $1 million to students for their innovative work and scientific achievements.