Join Our Rangers from WCS Congo on Vimeo. 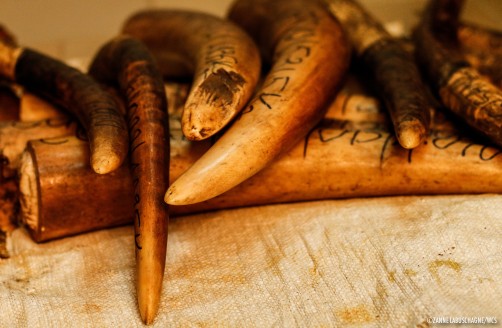 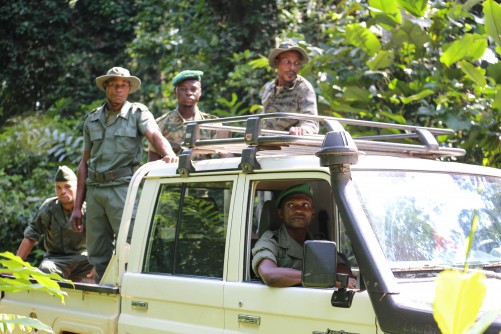 A group of investigators and legal experts, who make up the Wildlife Crime Unit (WCU) employed by the Nouabale-Ndoki National Park to follow up wildlife crime cases, have been tracking Dissaka’s whereabouts closely since September 2016. After a string of successful operations, the ‘Daring’ network was finally identified and infiltrated. Later in January 2017, a WCU-informed police raid seized 70 kg of ivory in the northern logging town of Pokola. One member of the Daring network was arrested at the scene, who promptly cited Dissaka as the owner of the ivory.

With evidence stacking against Dissaka, the State Prosecutor for the District of Sangha issued a warrant for his arrest, and the manhunt began. Clearly aware of his precarious position, Dissaka maintained a low profile. In early May, WCU investigators finally located Dissaka’s hideout in the District Capital of Ouesso, and coordinated his arrest with the local police and the Ministry of Forestry Economy and Sustainable Development (MEFDD) on the 17th of May 2017.  Swiftly, two days later, Daring Dissaka was tried and convicted with the maximum sentence possible for wildlife crime (5 years) and a major fine (USD $5,000).

However, this is not Dissaka’s first jail sentence. As early as 2005, Dissaka started hunting elephants for ivory in Northern Congo, and has since built links to major international ivory dealers.  In 2011, a PALF (Projet d'appui à l'Application de la Loi sur la Faune) investigation led to the conviction of a Chadian ivory trafficker arrested by rangers working on the periphery of Nouabale-Ndoki National Park - a buyer of Dissaka’s ivory. Subsequent investigations led to Dissaka’s arrest in 2011 and then later in 2013. Both times, he served incomplete jail sentences, and upon release his return to old habits was almost immediate.

Launched in February 2016, the Wildlife Crime Unit operates within the periphery of the Nouabalé-Ndoki National Park supporting the Park’s ranger team in researching illegal activities. The WCU’s legal follow-up branch consists of dedicated Congolese lawyers who follow up on wildlife crime cases at the courts and prisons in northern Congo’s two large district capitals, Ouesso and Impfondo. Since its conception, WCU investigations have directly led to 17 major convictions, 9 of which are for the longest serving sentence for wildlife crime in the Republic of Congo (5 years).

“This strong result shows that the park’s integrated approach of on-the-ground patrols, coupled with intelligence-driven operations carried out together with conservation authorities in the park’s periphery, are effectively taking down the patrons of elephant poaching and dismantling the criminal syndicates involved in the lucrative ivory trade.” said Eric Arnhem, WCS Director of the Nouabale-Ndoki National Park.

Currently, the WCU are working with the Congolese authorities hoping to transfer Dissaka to a prison further south. With his strong connections in the north, his chances of evasion, or continued involvement in poaching and trafficking activities (even from the confines of prison) are much higher. Through a strategic prison transfer, ongoing monitoring, and providing follow-up visits and prisoner council, it is hoped the path to recidivism for Dissaka is blocked once and for all.

MISSION: WCS saves wildlife and wild places worldwide through science, conservation action, education, and inspiring people to value nature. To achieve our mission, WCS, based at the Bronx Zoo, harnesses the power of its Global Conservation Program in nearly 60 nations and in all the world’s oceans and its five wildlife parks in New York City, visited by 4 million people annually. WCS combines its expertise in the field, zoos, and aquarium to achieve its conservation mission. Visit: newsroom.wcs.org Follow: @WCSNewsroom. For more information: 347-840-1242. Visit: http://wcscongoblog.org Follow: @wcs_congo