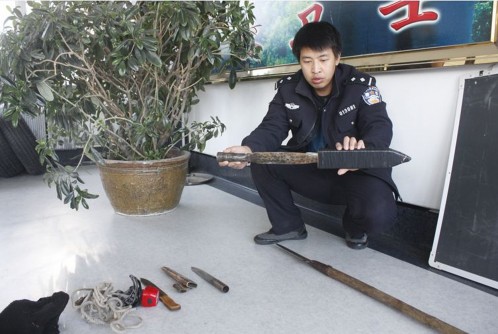 Forestry officials with confiscated weapons and wildlife including a wild boar.

WCS congratulates Chinese authorities for swift action WCS assists in anti-poaching patrols and technology sharing Newswise — NEW YORK (December 18, 2013) – The Wildlife Conservation Society (WCS) congratulates authorities in China’s Jilin Province for the recent arrests of five poachers – the largest ever for the province. The arrests were made by the Forestry Police of the Hunchun Municipal Forestry Bureau (HMFB), who said the organized gang of poachers with two jeeps and 18 hunting dogs admitted to killing more than 20 animals including tiger prey. In addition to the arrests, the jeeps and dogs were confiscated. HMFB is one of the members of LECF (Law Enforcement Cooperation Framework) initiated by WCS in 2011. With WCS help, HMFB has been conducting SMART (Spatial Monitoring and Reporting Tool) patrols and snare removal campaigns, as well as camera trapping in the rural areas outside of Hunchun National Nature Reserve (HNR) since last January. To strengthen anti-poaching and wildlife conservation, HMFB established a special Wildlife Conservation Section in this July. The arrests are a significant milestone in using SMART to increase the commitment of the forestry rangers and optimize the impact of their work on illegal activities within and around the protected areas while improving enforcement of wildlife laws. In 2008, HNR was the first protected area in China to adopt SMART. The practice has since been extended to the Wangqing and Changbaishan Nature reserves, and adopted by the Hunchun Forestry Police. The evidence and experience collected so far proves the validity of this methodology; further expansion can play a significant role in promoting nature conservation in and around protected areas in China. WCS, with support from the U.S. Fish and Wildlife Service and the Liz Claiborne and Art Ortenberg Foundation, has been working on Amur tiger and Amur leopard conservation in northeast China for over a decade. We helped China to establish the Hunchun Tiger Leopard Reserve in December 2001. Since then we have been working with local government and other partners to tackle threats such as poaching of both tigers and their prey and encouraging reforms that are leading to the return of tigers and leopards to this important landscape. The WCS China Program was recently acknowledged for this work by the Ford Green Motor Company, who presented the program with the 2013 Ford Green Pioneer Award. This summer WCS camera traps recorded the presence of an adult resident female tiger in Hunchun, and just recently tracks of a female tiger with cubs were reported, an indication that the tiger population in Northeast China is on the rebound. Last month WCS confirmed that camera traps in the Wangqing Nature Reserve in Jilin Province recorded footage of a female Amur leopard with two cubs, marking the first record of breeding by this critically-endangered cat in China. The cameras, located some 30 km (18 miles) away from the primary Amur leopard population on the Russia side of the China-Russia border, are part of a region-wide camera trap project conducted by the Forestry Bureau of Jilin Province. ###