Make Mine a Double-Shot, Zero-G Espresso

Funky-looking space cups are a new option for astronauts aboard the International Space Station, allowing them to smell and enjoy hot beverages thanks to research on the behavior of fluids in space 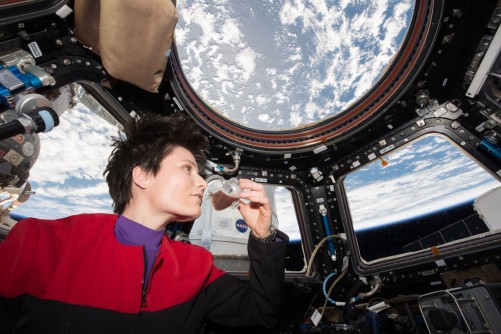 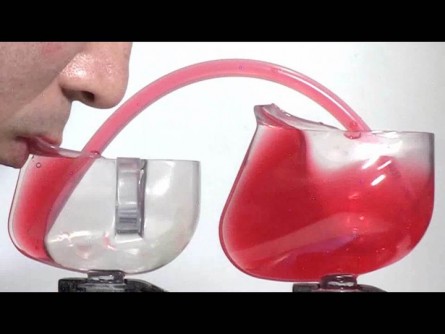 Sometimes the little things in life can make all the difference — and when you are in orbit above the planet Earth, like the crew aboard the International Space Station, this is especially true. Did you know that astronauts are accustomed to drinking beverages from bags due to safety concerns over spillage?

So you can imagine how six funky-looking cups crafted from a 3-D printed transparent polymer are making spending time in space a more enjoyable experience.

Astronauts' responses when testing out the cups so far range from "Hey, you can smell the coffee," to "This is eerily like drinking on Earth." Or the cup simply elicits happy eruptions of laughter because the astronauts readily confess they hadn't expected it to work.

Last year, it was big news when Italy sent an espresso machine up to the Space Station for Samantha Cristoforetti, an Italian European Space Agency astronaut. This, of course, inspired a team of researchers to study the related strange fluids phenomena in low gravity — such as espresso crema formation and settling, capillary interfaces, and containment of potentially hazardous drinks within a spacecraft.

To do this, the researchers designed a cup that exploits surface tension as opposed to gravity and, during the American Physical Society's 68th Annual Meeting of the Division of Fluid Dynamics, Nov. 22-24, 2015, in Boston, Mass., they'll present their findings about how it's working out aboard the Space Station.

The cup works so well that the crew is able to cruise around, do flips, and even toss them back and forth — while drinking beverages such as fruit juice, fruit smoothies and coffee.

"Wetting conditions and the cup's special geometry create a capillary pressure gradient that drives the liquid forward toward the face of the drinker," explained Mark Weislogel, one of the team members who is a senior scientist for IRPI LLC, an Oregon-based R&D and consulting firm specializing in fluid-thermal engineering, as well as a professor of mechanical engineering at Portland State University.

Unlike drinking a beverage from a bag, "your nose is closer to the beverage, which makes it easier to actually smell it while drinking," he added. "An astronaut can drain the cup in sips or one long gulp in much the same manner as on Earth … without tipping their head, without gravity. It's a stable situation — even though drinking scalding liquids from open containers while aboard the International Space Station is generally considered a safety concern."

Of the six cups currently aboard the Space Station, five hold 150mL, while the sixth is a 60mL demitasse specifically intended for espresso. The cups are complexly shaped and demonstrate that specific control of liquids can be maintained in low-gravity environments — but with completely different fluidics principles at play than on Earth.

Since this is a microgravity fluids experiment, if the team "is able to design spacecraft fluids systems with the same confidence as for a terrestrial system, we'll be in a great position to succeed in more complex missions in space with greater performance and security," Weislogel noted.

The next step for the team is to apply their knowledge of low-gravity capillary fluidics phenomena to design more reliable life-support systems for the Space Station and future spacecraft.

"Management of water, liquid fuels, coolants, and even drinks, when the influence of gravity is negligible, is a delightful challenge," added Weislogel. "If this can be accomplished passively, without moving parts, by special control of wetting properties, container shape, and surface tension, we're all in. We love watching and studying the large liquid surfaces that can dominate fluid behavior in space. And if astronauts are enjoying their coffee in a richer, deeper manner than before … well, that's nice too."

A press briefing featuring a selection of newsworthy research talks will be streamed live from the conference at 1:00 p.m. ET on Monday, Nov. 23. For more information, email [email protected].