Making a Point: Picoscale Stability in a Room-Temperature AFM 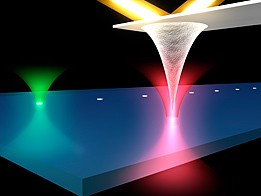 In an atomic force microscope (AFM), force is measured by a laser beam (yellow in this artist's rendition) bouncing off the diving-board like cantilever. To make an ultrastable AFM, researchers at JILA added two other lasers (green and red) to measure the three dimensional position of both the tip and a reference mark in the sample. These measurements allow researchers to remove drift and vibration in the instrument's measurements caused by environmental factors.

Newswise — Forget dancing angels, a research team from the National Institute of Standards and Technology (NIST) and the University of Colorado (CU) has shown how to detect and monitor the tiny amount of light reflected directly off the needle point of an atomic force microscope probe, and in so doing has demonstrated a 100-fold improvement in the stability of the instrument's measurements under ambient conditions. Their recently reported work* potentially affects a broad range of research from nanomanufacturing to biology, where sensitive, atomic-scale measurements must be made at room temperature in liquids.

Atomic force microscopes (AFMs) are one of the workhorse tools of nanotechnology. AFMs have a sharp, pointed probe fixed to one end of a diving-board-like cantilever. As the probe is scanned across a sample, atomic-scale forces tug at the probe tip, deflecting the cantilever. By reflecting a laser beam from the top of the cantilever, researchers can sense changes in the force and build up a nanoscale topographic image of the sample. The instruments are terrifically versatile—in various configurations they can image electrostatic forces, chemical bonds, magnetic forces and other atomic-scale interactions.

While extremely sensitive to atomic-scale features, AFMs also are extremely sensitive to interference from acoustic noise, temperature shifts and vibration, among other factors. This makes it difficult or impossible either to hold the probe in one place to observe the specimen under it over time (useful for studying the dynamics of proteins) or to move the probe away and return to exactly the same spot (potentially useful for nanoscale manufacturing). "At this scale, it's like trying to hold a pen and draw on a sheet of paper while riding in a jeep," observes NIST physicist Thomas Perkins. A few instruments in specialized labs, including some at NIST, solve this problem by operating at extremely cold temperatures in ultra-high vacuums and in heavily isolated environments, but those options aren't available for the vast majority of AFMs, particularly those used in bioscience laboratories where the specimen often must be immersed in a fluid.

The JILA solution uses two additional laser beams to sense the three-dimensional motion of both the test specimen and the AFM probe. The beams are held stable relative to each other to provide a common reference. To hold the specimen, the team uses a transparent substrate with tiny silicon disks—"fiducial marks" —embedded in it at regular intervals. One laser beam is focused on one of these disks. A small portion of the light scatters backwards to a detector. Any lateral vibration or drift of the sample shows up at the detector as a motion of the spot while any vertical movement shows up as a change in light intensity.** A similar trick with the second beam is used to detect vibration or drift in the probe tip, with the added complication that the system has to work with the scant amount of light reflected off the apex of the AFM probe. Unwanted motion of the tip relative to the sample is corrected on the fly by moving the substrate in the opposite direction. "This is the same idea as active noise cancellation headphones, but applied to atomic force microscopy," says Perkins.

In its most recent work, the JILA team has controlled the probe's position in three dimensions to better than 40 picometers (1 nanometer = 1000 picometers) over 100 seconds. In imaging applications, they showed the long-term drift at room temperature was a mere 5 picometers per minute, a 100-fold improvement over the best previous results under ambient conditions. Just like photographers use the stability of a tripod and longer exposures to improve picture quality, the JILA team used their improved stability to scan the AFM probe more slowly, leading to a 5-fold improvement in AFM image quality. A bonus, says Perkins, is the technique works with standard commercial probes.