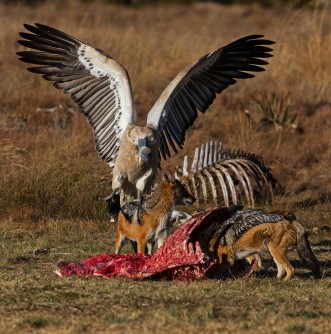 Vultures and jackals are expert scavengers, and are seen here enjoying a free lunch. 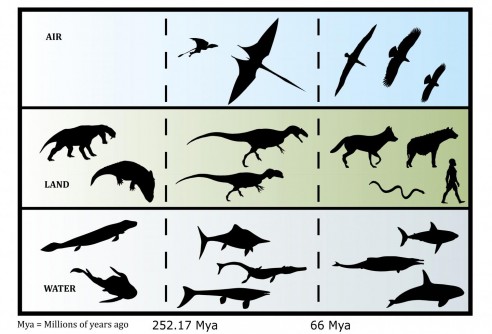 An evolutionary timescale of scavenging in the air, on the land, and in the sea.

Newswise — Take a look at the teeth of any animal. The chances are you'll then have a good idea if it's a meat eater or a vegetarian. Sharp canines? Easy. All the better to eat you with. But how would you find out whether your chosen species got by on dead meat, or if it survived and thrived by catching live prey? To answer that kind of question you have to go beyond teeth and look at many other aspects of its biology -- from the way the creature moves to how far it can see.

That's according to collaborative research from scientists at University College Cork, Trinity College Dublin, St Andrews University, and Imperial College London, who argue that Mother Nature requires the right mix of biological ingredients to make a good scavenger. Their work also suggests that the same ingredients produce different end results when the recipe is varied, because good scavengers can live in vastly different environments and look very different from one another.

Any sense that allows you to detect an unmoving meal is a particularly useful trait for a would-be scavenger - especially when it is coupled with an ability to search far and wide for scattered food. But location matters too. An environment containing next to no wildlife isn't going to be a good place to start your search, and it's even tougher in fast-moving rivers where any bodies soon become swept away.

Typically, vultures and hyenas are the species that come to mind when we think of scavengers, and for good reason. Both can detect carcasses from huge distances away, and both are able to move over vast areas without breaking a sweat. But research shows there is no sharp distinction between a scavenger and a predator. Instead, meat-eating species are spread along a gradient. Even a hungry vulture will hunt, should the opportunity arise, while regal lions will regularly "lower" themselves to taking carrion if it provides a free lunch.

We should, therefore, think of different species in terms of where they sit on a scavenging scale, on which those best suited to the lifestyle appear at one end, and those ill-suited to scavenging are sited at the other. This was the idea set out by the research team, whose work shows that you can position any animal - extinct or alive -- on this scale, based on its biological traits and by its environment.

Interestingly, the same useful meat-thieving traits can and do work in different environments; albatrosses regularly take dead squid floating on the sea surface, and these birds have so many similarities to vultures that they have been dubbed the "vultures of the sea".

But there are surprises too. For example, on the African savannah, cheetahs are at a severe disadvantage; despite the bounty of carrion, they're built for bursts of speed over short distances, and are easily bullied off their food by stockier big cats and hyenas.

Research Fellow at University College Cork, Adam Kane, is lead author of the article just published in the journal Ecography. He said: "What's really interesting is that we can also place long-extinct species on this scavenging scale and get a sense of whether or not they were likely capable scavengers, which helps us build a more complete picture of the past."

"For example, despite having keen senses, it would have been too metabolically costly for large meat-eating dinosaurs to search the huge areas required to find enough food from carrion alone. And so, Tyrannosaurus only finds itself in the middle of the scale."

Co-author and Research Fellow in Trinity College Dublin's School of Natural Sciences, Kevin Healy, said: "The scale is also interesting from the perspective of evolution -- the contrast between past and present is really striking for some groups that evolved millions of years ago but persist to this day. Most notably, modern-day bats are poor performers on the scale -- they're clumsy on the ground and they stand little chance against competitors in a food fight, but the history of the group tells a different story."

"The curiously named 'death-eater bat', which lived tens of millions of years ago, had a jaw and teeth that look fit for scavenging, but modern-day bats have lost these adaptations."

Even human beings and our ancestors have their place on this scale, and we fare quite well. Tool use and cooperative nature meant it was likely that prehistoric people regularly had carrion for dinner.