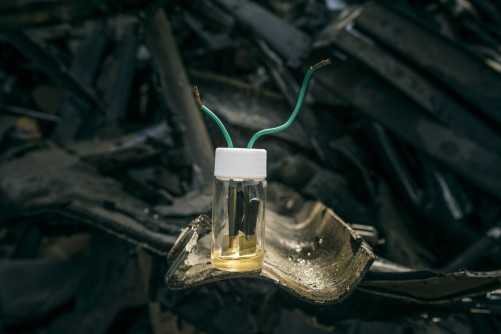 Newswise — Take some metal scraps from the junkyard; put them in a glass jar with a common household chemical; and, voilà, you have a high-performance battery.

“Imagine that the tons of metal waste discarded every year could be used to provide energy storage for the renewable energy grid of the future, instead of becoming a burden for waste processing plants and the environment,” said Cary Pint, assistant professor of mechanical engineering at Vanderbilt University.

To make such a future possible, Pint headed a research team that used scraps of steel and brass – two of the most commonly discarded materials – to create the world’s first steel-brass battery that can store energy at levels comparable to lead-acid batteries while charging and discharging at rates comparable to ultra-fast charging supercapacitors.

The research team, which consists of graduates and undergraduates in Vanderbilt’s interdisciplinary materials science program and department of mechanical engineering, describe this achievement in a paper titled “From the Junkyard to the Power Grid: Ambient Processing of Scrap Metals into Nanostructured Electrodes for Ultrafast Rechargeable Batteries” published online this week in the journal ACS Energy Letters.

The secret to unlocking this performance is anodization, a common chemical treatment used to give aluminum a durable and decorative finish. When scraps of steel and brass are anodized using a common household chemical and residential electrical current, the researchers found that the metal surfaces are restructured into nanometer-sized networks of metal oxide that can store and release energy when reacting with a water-based liquid electrolyte.The team determined that these nanometer domains explain the fast charging behavior that they observed, as well as the battery’s exceptional stability. They tested it for 5,000 consecutive charging cycles – the equivalent of over 13 years of daily charging and discharging – and found that it retained more than 90 percent of its capacity.

“When our aim was to produce the materials used in batteries from household supplies in a manner so cheaply that large-scale manufacturing facilities don’t make any sense, we had to approach this differently than we normally would in the research lab,” Pint said.

The research team is particularly excited about what this breakthrough could mean for how batteries are made in the future.

“We’re seeing the start of a movement in contemporary society leading to a ‘maker culture’ where large-scale product development and manufacturing is being decentralized and scaled down to individuals or communities. So far, batteries have remained outside of this culture, but I believe we will see the day when residents will disconnect from the grid and produce their own batteries. That’s the scale where battery technology began, and I think we will return there,” Pint said.

The Vanderbilt team drew inspiration from the “Baghdad Battery,” a simple device dating back to the first century BC, which some believe is the world’s oldest battery. It consisted of a ceramic terracotta pot, a copper sheet and an iron rod, which were found along with traces of electrolyte. Although this interpretation of the artifacts is controversial, the simple way they were constructed influenced the research team’s design.

The team’s next step is to build a full-scale prototype battery suitable for use in energy-efficient smart homes.

“We’re forging new ground with this project, where a positive outcome is not commercialization, but instead a clear set of instructions that can be addressed to the general public. It’s a completely new way of thinking about battery research, and it could bypass the barriers holding back innovation in grid scale energy storage,” Pint said.

The work was supported by the National Aeronautics and Space Administration EPSCoR grant NNX13AB26A, the National Science Foundation graduate fellowship program under grant 1445197 and a Vanderbilt Discovery Grant. The team worked with Matt McCarthy at PSC Metals, who provided access to its scrap metal facility in support of this project.