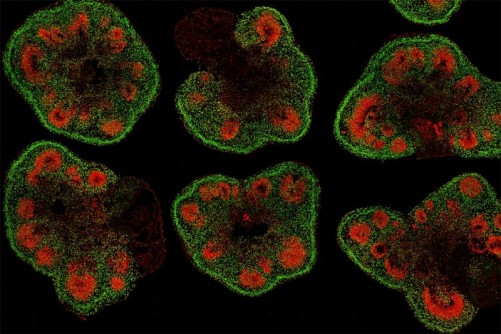 Newswise — By using stem cells to grow miniature brain-like organs in the lab, scientists have opened a new avenue for studies of neurological development, disease and therapies that can’t be conducted in living people. But not all mini–brain organoids are created equal and getting them to precisely mimic the human brain tissues they’re modeling has been a persistent challenge.

“Right now, it’s like the Wild West because there is no standard method for generating mini–brain organoids,” said Bennett Novitch, a member of the Eli and Edythe Broad Center of Regenerative Medicine and Stem Cell Research at UCLA and the senior author of a new paper on the topic. “Every neuroscientist wants to make a brain organoid model of their favorite disease, and yet everyone’s organoids do not always look alike.”

In fact, because there is no common protocol for their production and a lack of quality-control guidelines, organoids can vary from lab to lab — and even from batch to batch — which means that a finding made in one organoid may not hold true in another.

“If my lab and another lab down the hall were to conduct drug screens using mini–brain organoid models of the same disorder, we could still get different results,” said Momoko Watanabe, the new paper’s first author and an assistant professor of anatomy and neurobiology at UC Irvine. “We won’t know whose findings are correct because the differences we’re seeing could be reflections of how our models differ rather than reflections of the disease.”

In their new study, published today in Stem Cell Reports, Novitch, Watanabe and their colleagues propose guidelines based on their research that can help scientists overcome two major obstacles standing in the way of these organoids’ full potential: differences in uniformity and structure.

Having organoids that accurately and consistently recreate the structure and cellular makeup of specific sections of the brain is especially important for studying disorders like schizophrenia and autism spectrum disorder in which the brains of affected people often appear identical to neurotypical brains in structure yet exhibit marked differences in function.

“We’ll never be able to identify the subtle differences in brain structure and function — things that are relevant for patients with neurological disorders — if our organoids have the wrong balance of cell types or grossly irregular structure,” said Novitch, who is also director of the UCLA Brain Research Institute’s Integrated Center for Neural Repair.

Creating the best organoids: A question of maturity

To produce mini–brain organoids, which can range from 1 to 5 millimeters in diameter, scientists first take human skin or blood cells and reprogram them to become induced pluripotent stem cells — cells that can differentiate into any cell type in the body. They then direct these iPS cells to create neural stem cells, which can produce most cell types found in the brain. As the neural stem cells are forming, they can be coaxed to aggregate into 3D organoids. Simple enough. But why do some organoids better resemble the human brain than others?

To answer this question, the team collaborated with pluripotency experts Kathrin Plath and Amander Clark from the UCLA Broad Stem Cell Research Center. They discovered that the developmental maturity of the stem cells from which an organoid is grown influences its quality, much as the freshness of ingredients influences the quality of a culinary dish.

“In human embryonic development, the nervous system is one of the first structures to form, so it makes sense that stem cells that are early in development are best at producing brain organoids,” said Watanabe, who is also a member of the UCI Sue & Bill Gross Stem Cell Research Center.

The researchers then found that the best way to keep human stem cells in an early developmental state suitable for organoid formation was to grow them in a dish with mouse skin cells, referred to as fibroblast feeders, since these provide essential chemical signals and structural support that helps stem cells expand and preserve their immaturity over time.

Unfortunately, they also discovered that using mouse cells could make organoids less suitable for the development of cellular therapies to replace diseased or damaged neural tissues. Further, these feeder-supported methods are more laborious than the stem cell growth methods many labs commonly use.

The team next turned to RNA sequencing and computational analysis in an attempt to pinpoint genetic differences between stem cells that produce good organoids and those that don’t. This enabled them to identify four molecules — all belonging to the transforming growth factor beta superfamily of molecules — that were responsible for keeping stem cells in a less-developed state.

Adding these four molecules to stem cells growing in a dish kept them in an immature state and enabled these cells to produce high-quality, well-structured organoids.

“We found a way to have our cake and eat it, too,” Novitch said. “We have taken mouse cells out of the equation while retaining some of their benefits for organoid formation, bringing us closer to our goals of studying and developing treatments for complex neurological diseases.”

The research was funded by the Ablon Scholars Program at UCLA’s Jonsson Comprehensive Cancer Center and Broad Stem Cell Research Center; research/training awards from the National Institutes of Health, the California Institute for Regenerative Medicine, the Rose Hills Foundation and the Broad Stem Cell Research Center; the Uehara Memorial Foundation; the UCLA Brain Research Institute; and a Faculty Scholar grant from the Howard Hughes Medical Institute.