Reviewing advances in this tough to treat disease 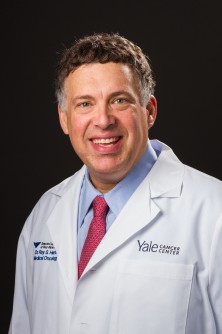 Newswise — New Haven, Conn. — Hard to detect in its early stages and hard to treat as it advances, lung cancer is the leading cause of cancer mortality around the world, with an estimated 1.6 million deaths each year. New treatments, however, are bettering the odds for people with non-small cell lung cancer (NSCLC), which makes up about 85 percent of lung cancer cases.

“Progress has been enormous in the past 20 years,” said Roy Herbst, M.D., Ph.D., chief of Medical Oncology at Yale Cancer Center and professor of Medicine and Pharmacology at Yale School of Medicine.

Traditionally, NSCLC has been treated by surgery followed by chemotherapy or radiation or both. “Options for treatments have improved in recent years with the advent of two classes of drugs, molecularly targeted therapies and more recently immunotherapies,” said Herbst, co-lead author on a paper reviewing advances in NSCLC treatment published in the journal Nature. (Co-lead authors include: Daniel Morgensztern, M.D., associate professor of Medical Oncology at Washington University, and Chris Boshoff, senior vice president for Global Product Development for Oncology, Pfizer Inc., and adjunct professor, Yale School of Medicine.)

Molecularly targeted drugs aim to attack tumor cells that have mutated genes such as EGFR that can drive cancer. The Food & Drug Administration (FDA) gave its first approval for an EGFR inhibitor for NSCLC in 2004, and about a quarter of NSCLC patients now can be treated with various targeted drugs. Research is underway at Yale and many other Institutions to discover additional molecular targets. However, patients eventually develop resistance to these medicines, Herbst said.

Another wave of treatment options began to arrive in 2015 when the FDA approved the first “immune checkpoint blocker” for patients with advanced NSCLC. These immunotherapies clog up mechanisms that prevent the body’s immune T cells from attacking tumors, by inhibiting a protein called PD-1 on the surface of T cells or its partner protein PD-L1 on tumor cells. Patients whose tumors show high levels of PD-L1 are generally the best candidates to benefit from such immunotherapies.

To date, immune checkpoint blockers work well for about one-fifth of NSCLC patients. “However, we've seen that although many tumors express PD-L1, many don't, and PD-L1 inhibition won’t work for those,” said Herbst. “Even among tumors that have high PD-L1 expression, many don’t have any T cells in the tumor microenvironment, so that doesn’t work either. We need to figure out how we're going to ‘warm up’ tumors and make them more sensitive to these different therapies.” Additionally, as with targeted therapies, most tumors become resistant to immunotherapies over time.

Novel immunotherapies addressing other components of the immune system will be critical to overcome these challenges, Herbst suggested. Another key will be to combine immunotherapies, or to pair them up with chemotherapy, targeted therapy, medicines that suppress the growth of blood vessels, or other forms of cancer treatments.

“We need to move the personalized approach that we've used for targeted therapy to immunotherapy, matching the right patient to the right medicine at the right time,” Herbst emphasized.

Other research efforts are creating new approaches to detect lung cancer and track it as it evolves in each patient. Last year, the FDA approved a “liquid biopsy” test for NSCLC that can find certain types of EGFR mutations by sequencing fragments of tumor DNA that circulate in the blood. More advanced tests of this “circulating free tumor DNA” are being developed to support individualized lung cancer treatment. “A liquid biopsy lets you see things in real time, and you can do multiple biopsies because they are less invasive for the patient,” Herbst said. “Liquid biopsies are not quite as sensitive as a tumor biopsy, but some evidence suggests that they might actually give a more realistic view of the disease throughout the entire body.”

Clinical research in NSCLC is being accelerated by innovative large clinical studies, such as the Lung Master Protocol (Lung-MAP) trial, which has enrolled more than 1400 patients to test a host of targeted drug candidates among previously treated patients with squamous cell lung cancer. Lung-MAP is now extending its scope to test combinations of targeted medicines and immunotherapies.

Herbst directs Yale’s Specialized Program of Research Excellence (SPORE) for lung cancer, one of three lung cancer SPOREs funded by the National Cancer Institute. The program brings together experts in oncology, immunobiology, pharmacology, molecular biology, pathology, epidemiology and addiction science to attack the disease. “We aim to bring results from the lab to the clinic and back again,” he said.

“Overall, we’re seeing unprecedented benefits for people with NSCLC, but it’s a very tough disease,” Herbst summed up. “We’re still only helping 30 or 35 percent of patients. Our research has to remain novel and innovative. We still have a lot of work to do.”

About Yale Cancer Center
Yale Cancer Center (YCC) is one of only 49 National Cancer Institute (NCI-designated comprehensive cancer) centers in the nation and the only such center in southern New England. Comprehensive cancer centers play a vital role in the advancement of the NCI’s goal of reducing morbidity and mortality from cancer through scientific research, cancer prevention, and innovative cancer treatment.