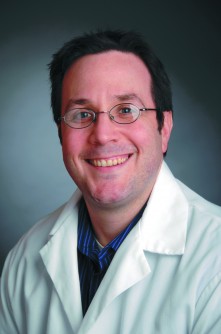 Newswise — BOSTON--Dana-Farber Cancer Institute scientists report they have shrunk or slowed the growth of notoriously resistant pancreatic tumors in mice, using a drug routinely prescribed for malaria and rheumatoid arthritis.

The pre-clinical results, which will appear in the April issue of the journal Genes & Development and is currently published on its web site, have already prompted the opening of a small clinical trial in patients with advanced pancreatic cancer, one of the deadliest and hardest-to-treat forms of cancer, said the investigators, led by Alec Kimmelman, MD, PhD, a radiation oncologist at Dana-Farber.

"We are seeing robust and impressive responses in pancreatic cancer mouse models," said Kimmelman, whose laboratory specializes in studies of pancreatic cancer, the fourth-leading cause of cancer death in the United States. The oral drug, hydroxychloroquine, is inexpensive, widely available, and causes relatively mild side effects, he said. A second, planned clinical trial will combine the drug with radiation. "While these findings are indeed exciting and a cause for optimism, one needs to be mindful that so far the effects, while impressive, have only been shown in mice," said Ronald DePinho, MD, director of the Belfer Institute for Applied Cancer Science at Dana-Farber. "I eagerly await to see how the human studies will progress."

A new treatment avenue would be extremely welcome in pancreatic cancer. The National Cancer Institute estimates that 43,140 people were diagnosed in 2010 and 36,800 died. Despite some recent gains with targeted molecular agents and combination regimens, only about 6 percent of patients live five years, and the median survival is less than six months.

Hydroxychloroquine is a form of the drug chloroquine, which is used to prevent and treat malaria and also prescribed for autoimmune diseases, including lupus and rheumatoid arthritis. These compounds have recently stirred much interest in cancer research, because they inhibit a process called autophagy (from the Greek for "self-eating") that is elevated in cancer cells.

Autophagy is present in normal cells as well, but at a much lower level. The process enables cells to break down and eliminate proteins, such as damaged cell membranes and worn-out organelles like mitochondria. But it is also a survival strategy. When nutrients are scarce, cells can digest and feed on their own non-critical proteins to avoid starvation.

Cancer cells also use autophagy to outwit chemotherapy treatment. Research has shown that cancer cells can activate this process in response to a variety of cancer treatments, allowing them to survive during the stress of therapy. But, as Kimmelman noted, autophagy can also be a cell-death mechanism. Cancer researchers are intensely studying – and debating – how to manipulate autophagy as a potential method to slow tumors’ growth or make them more sensitive to other therapies.

In their research reported in Genes & Development, Kimmelman and colleagues were stunned to find that autophagy was turned on at all times in pancreatic cancer cell lines – not just under conditions of stress, treatment or starvation. "This was a big surprise," he said. "These cells weren't deprived of nutrients; they were swimming in all the nutrients they could ever want." This suggested that for some unknown reason, pancreas tumors are highly dependent on autophagy, and therefore potentially uniquely good candidates for autophagy-inhibiting treatment.

In their next experiments, the team administered chloroquine to several different pancreatic cancer cell cultures, and also tested its effects in three types of mouse models. In the laboratory cultures, they reported, the drug "markedly decreased" the growth of the tumor cells, showing that the cells were heavily dependent on autophagy to for continued growth.

The response to chloroquine was "profound" in the xenograft models, Kimmelman said: All eight untreated mice died of their cancer within 140 days, while only one of eight treated mice had died by 180 days.

The drug's effects were less dramatic but still impressive in the orthotopic and genetic mouse models, the researchers said. The tumors that developed in the genetically pancreatic cancer-prone mice were, like their equivalent in human patients, extremely resistant to all treatments. Among other properties, these tumors were embedded in tough, fibrous tissue that is difficult for drugs to penetrate.

Nevertheless, the scientists reported that chloroquine treatment as a single agent increased the rodents' survival by 27 days compared with untreated control mice. This is encouraging, Kimmelman commented, because even the newest targeted drugs aimed at pancreatic cancer "don't have much effect in this genetic mouse model."

The Dana-Farber trial of hydroxychloroquine, led by Kimmelman and oncologist Brian Wolpin, MD, is designed to enroll 36 pancreatic cancer patients in whom first- or second-line treatments have failed. The drug is taken in pill form twice a day. Results won't become available for at least a year, said Kimmelman.

Kimmelman said the next step will be to investigate the combination of hydroxychloroquine with radiation in patients with operable pancreatic cancer.

"This is a very interesting and promising approach, attacking the Achilles' heel in pancreatic cancer's defenses," commented Robert Mayer, MD, of Dana-Farber’s Center for Gastrointestinal Oncology. "But it's too early to say whether hydroxychloroquine should be added to chemotherapy, and what the risks and benefits might be, so we want to examine it in a clinical trial."

Kimmelman's lab is also investigating other forms of cancer that might be good candidates for inhibition of autophagy by the drug. He said that their work, as well as recent findings from other labs, suggests that those cancers may be ones that are primarily driven by the KRAS oncogene – as nearly all pancreatic tumors are.

Kimmelman, who also is an assistant professor of radiation oncology at Harvard Medical School, is the senior author of the publication. First author is Shenghong Yang, PhD, a member of the Kimmelman lab. Other authors are from Dana-Farber, Massachusetts General Hospital, Harvard Medical School, Boston University, and scientists from Italy and Germany.

Funding was provided by Dana-Farber, the Friends of Dana-Farber Cancer Institute, the Sidney Kimmel Foundation, and the AACR-Pancreatic Cancer Action Network.