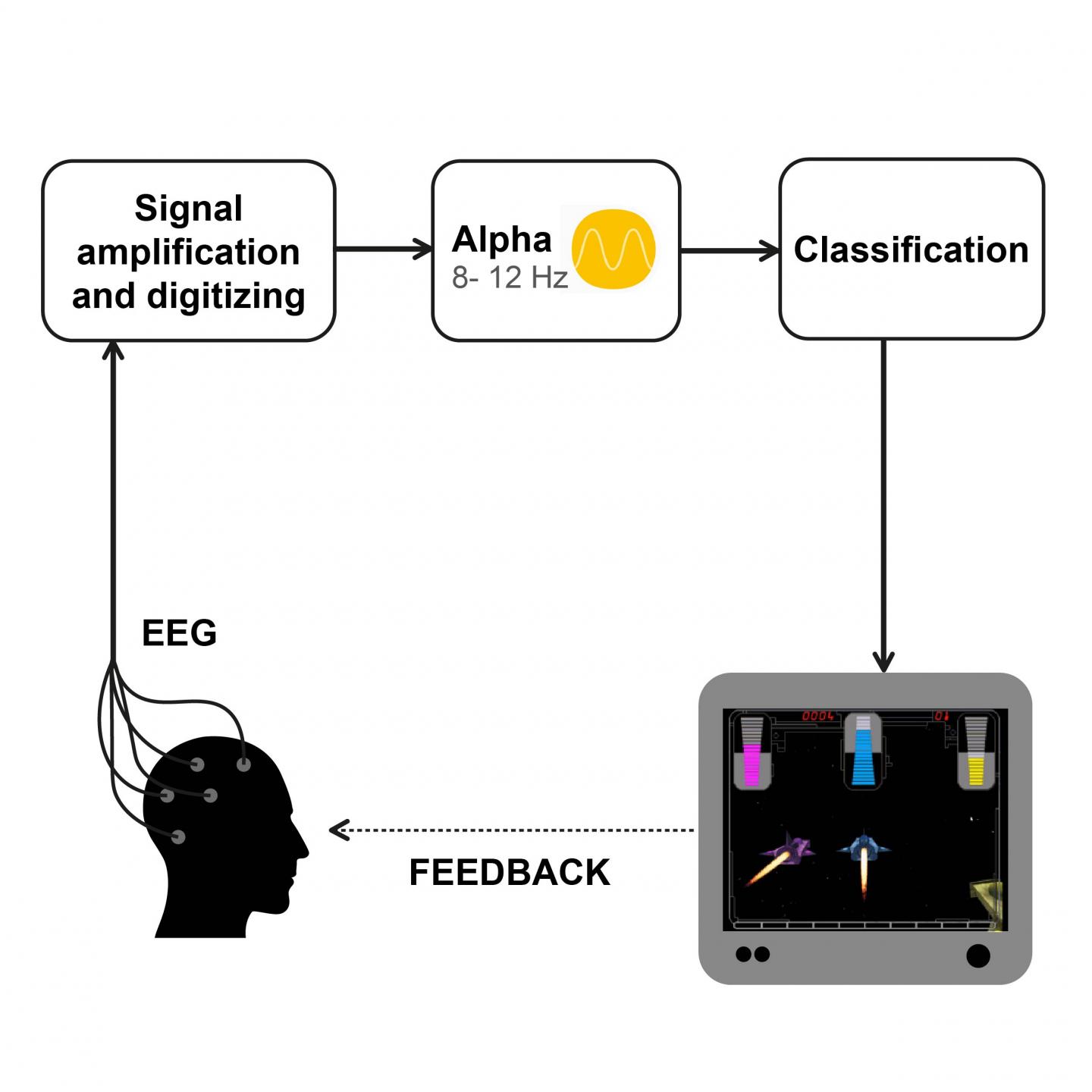 Neurofeedback loop: The EEG is recorded and the participant receives an instant feedback from his/her attention level captured by the alpha rhythm through a computer game, allowing to train the brain to concentrate.

Newswise — Attention Deficit Hyperactivity Disorder (ADHD) affects about 7% of children, with a two out of three chance of persisting into adulthood. This neurodevelopmental disorder is characterised by concentration difficulties, increased distractibility, impulsivity and hyperactivity. Today, ADHD is treated with pharmaceutical drugs that may have unwanted side effects. This is why scientists from the University of Geneva (UNIGE) and the University Hospitals of Geneva (HUG), Switzerland, explored a new technique called 'neurofeedback', which enables ADHD patients to train their attention, based on instant feedback from the level of their brain activity. The team of neuroscientists found that not only did the training have a positive effect on patients' concentration abilities, but also that the attention improvement was closely linked to an enhanced response from the brain- the P3 wave - which is known to reflect integration of information in the brain, with higher P3 amplitudes indicating greater attention towards detected targets. The findings are open-access and have been published in the journal Clinical Neurophysiology.

Attention Deficit Hyperactivity Disorder (ADHD) develops in childhood and leads to numerous difficulties with attention, concentration and impulsiveness. It has genetic associated with environmental causes, and is characterised by a deficit in dopamine, a neurotransmitter involved in executive functions. "These disorders persist for the most part into adulthood and lead to problems in relational and socio-professional functioning, making it easier for people with this disorder to turn to alcohol or drugs", notes Marie-Pierre Deiber, a researcher in the Department of Psychiatry at UNIGE Faculty of Medicine and at the HUG Division of Psychiatric Specialties.

Today, ADHD is treated with medications that increase the concentration of dopamine, which improves the patient's attention. As the disorder is often accompanied by depression, anxiety or even bipolar disorders, treatment is generally combined with psychotherapy. "However, pharmaceutical treatments can be accompanied by significant side effects, such as nervousness, sleep disturbance, but also an increased risk of developing other psychiatric disorders or cardiovascular diseases", explains Roland Hasler, a researcher in the HUG Division of Psychiatric Specialties. "This is why we wanted to investigate a completely non-pharmacological and non-invasive treatment based on the principle of 'neurofeedback'".

Sending the brain its own signals

Neurofeedback is a type of neurocognitive intervention based on the training of "real-time" brain signals. Using an electroencephalogram (EEG) with 64 sensors, the scientists capture the electrical activity of cortical neurons and focus their analysis on the spontaneous Alpha rhythm (with frequency around 10 Hertz), coupling its amplitude fluctuation to a video game that the patients can control with the power of their attention. "The aim of neurofeedback is to make the patients aware of the moments when they are no longer attentive. With practice, brain networks then "learn" to reduce attentional lapses through neuroplasticity", explains Tomas Ros, researcher in the Department of Basic Neurosciences at UNIGE Faculty of Medicine and at the Centre for Biomedical Imaging (CIBM). To do this, the patient's EEG is connected to a computer that displays the image of a space shuttle. When the patient is in an attentive brain state (low Alpha rhythm), this makes the space shuttle move forward. But as soon as the patient is distracted or loses attention (high Alpha rhythm), this stops the space-shuttle movement instantly. Faced with the stopping of the space shuttle, the patient realizes that he/she was no longer paying attention and refocuses to restart the shuttle.

Training the brain to focus without medication?

To measure the effects of neurofeedback training, the Geneva team administered an attention test to 25 adults with ADHD, and 22 neurotypical adults. The results showed that, at baseline, ADHD patients made more mistakes and had a more variable reaction time than the control participants, in line with a signature of impaired attention. After 30 minutes of neurofeedback training, the participants took the attention test again.

"The first finding was that stimulus detection and response variability were improved, indicating attentional enhancement", says Marie-Pierre Deiber. "But what interested us most was the impact of the neurofeedback training on the P3 component, which has previously been shown to be reduced in ADHD, and directly linked to the neurocognitive processing of the stimulus." The higher the amplitude of the P3, the more efficient the processing of the stimulus is, and the more accurate the response to the attention task. "The amplitude of the P3 increased significantly after neurofeedback training, and was directly associated with a reduction in the number of errors made by the patients", reports Tomas Ros.

This study firstly shows that a single 30-minute session of neurofeedback can induce short-term plasticity in the brain and encourages attentional improvements in ADHD patients. Secondly, it supports the existence of an electro-physiological marker of attentional processing in ADHD. "Thus, the P3 could be a cerebral signature that would allow us to better understand the neurocognitive mechanisms of ADHD", continues Nader Perroud, professor in the Department of Psychiatry at UNIGE Faculty of Medicine and at the HUG Division of Psychiatric Specialties. Finally, as the effects are evident in the short term, the scientists plan to carry out a neurofeedback treatment based on multiple training sessions, in order to observe whether the brain's plasticity is strengthened over time. "The ultimate goal is to enable patients to learn to concentrate without medication and to be able to train their brain in the comfort of their home», concludes Tomas Ros.