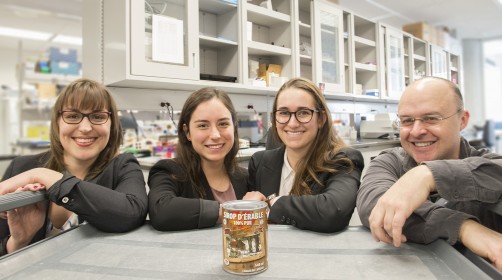 Newswise — Montreal (Quebec), April 13, 2016 – Catherine Aaron and Gabrielle Beaudry were 17 when they knocked on the door of the laboratory of Alex Parker, a neuroscience researcher at the University of Montreal Hospital Research Centre (CRCHUM). While students at Collège Jean-de-Brébeuf in Montreal, they were looking for a mentor for an after-school research project. Two and half years later, the results of this scientific adventure were published today in the Journal of Agricultural and Food Chemistry.

"We wanted to test the effect of a natural product on a neurodegenerative disease such as Alzheimer's. Professor Parker had already discovered that sugar prevents the occurrence of amyotrophic lateral sclerosis (ALS) in an animal model of the disease, the C. elegans worm. That’s how we got the idea of maple syrup, a natural sugar produced in Quebec,” said Beaudry.

Supervised by PhD student Martine Therrien and Alex Parker, Aaron and Beaudry added maple syrup to the diet of these barely 1 mm-long nematodes. "We just gave them a supplement of maple syrup at various concentrations and compared with a control group that had a normal diet," said Aaron. “After twelve days, we counted under the microscope the worms that were moving and those that were paralyzed. The worms that had consumed the highest dose of syrup were much less likely to be paralyzed.”

Alex Parker's C. elegans worms are genetically modified to express a protein involved in ALS in motor neurons – TDP-43. "When they are adults, around 12 days, their motor neurons break down. Normally, at two weeks of life, 50% of the worms are completely paralyzed. But among those that received a diet enriched with 4% maple syrup, only 17% were paralyzed. We can therefore conclude that maple syrup protects neurons and prevents the development of amyotrophic lateral sclerosis in C. elegans worms," said Parker, a researcher at the CRCHUM and professor at the Faculty of Medicine, University of Montreal.

How can we explain this dramatic effect? "Sugar is good for the nervous system. Diseased neurons require more energy to combat toxic proteins. But maple syrup is rich in polyphenols, powerful antioxidants found in certain foods. We isolated phenols contained in the maple syrup, and we showed that two polyphenols in particular, gallic acid and catechol, have a neuroprotective effect. In pure maple syrup, these polyphenols are found in low concentrations. Probably a combination of sugar and polyphenols prevents the occurrence of the disease in worms," said Therrien, a PhD student at the CRCHUM.

But don’t go ahead and gorge yourself on maple syrup thinking it'll protect you against neurological diseases! "The life expectancy of C. elegans worms is only three weeks. They are spared the long-term toxic effects of sugar. Humans who consume comparable amounts of sugar risk developing chronic diseases such Type 2 diabetes and obesity,” cautioned Parker.

Amyotrophic lateral sclerosis is a rare neuromuscular disease that causes paralysis and death a few years after the onset of symptoms. So far, no cure is available for patients. This latest study on maple syrup and the C. elegans worm was conducted for educational purposes. Other studies by Alex Parker with C. elegans have led to the discovery of promising drugs, which will be tested in patients in a few years.

Catherine Aaron and Gabrielle Beaudry won the Sanofi Biogenius Canada People’s Choice Award – Quebec section – for this project in April 2014. Aaron is now a first-year medical student at the University of Montreal, and Beaudry studies psychology at the University of Sherbrooke.

About the studyThe study "Maple syrup decreases TDP-43 proteotoxicity in a C. elegans model of ALS" was published online in the Journal of Agricultural and Food Chemistry on April 13, 2016 Catherine Aaron and Gabrielle Beaudry are undergraduate students, Alex J. Parker is a researcher at the CRCHUM and professor at the University of Montreal, and Martine Therrien recently completed a PhD at the CRCHUM and the University of Montreal. The study did not receive specific funding. Alex J. Parker is funded by the Fondation du CHUM, ALS Canada, the Canadian Health Research Institutes, le Fonds de recherche du Québec – Santé, and the American Muscular Dystrophy Association.

About the CRCHUMThe University of Montreal Hospital Research Centre (CRCHUM) is one of the largest hospital-based research centres in North America. Our mission is to improve the health of adults through a continuum of research from basic science, to population health, to clinical research. More than 1,950 people work at the CRCHUM, including 439 researchers and 700 students and research trainees: www.crchum.chumontreal.qc.ca/en