3D Map of Brown Dwarfs in the Sun’s Neighborhood. This video visualization depicts the newly published three-dimensional map of brown dwarfs (appearing as red dots) that have been discovered within 65 light-years of the Sun. The beginning of the video shows the location of the Earth at the center of the view, then zooms out into interstellar space, showing the spatial distribution of the brown dwarfs in multiple ways before returning back to the Solar System and Earth at the end. 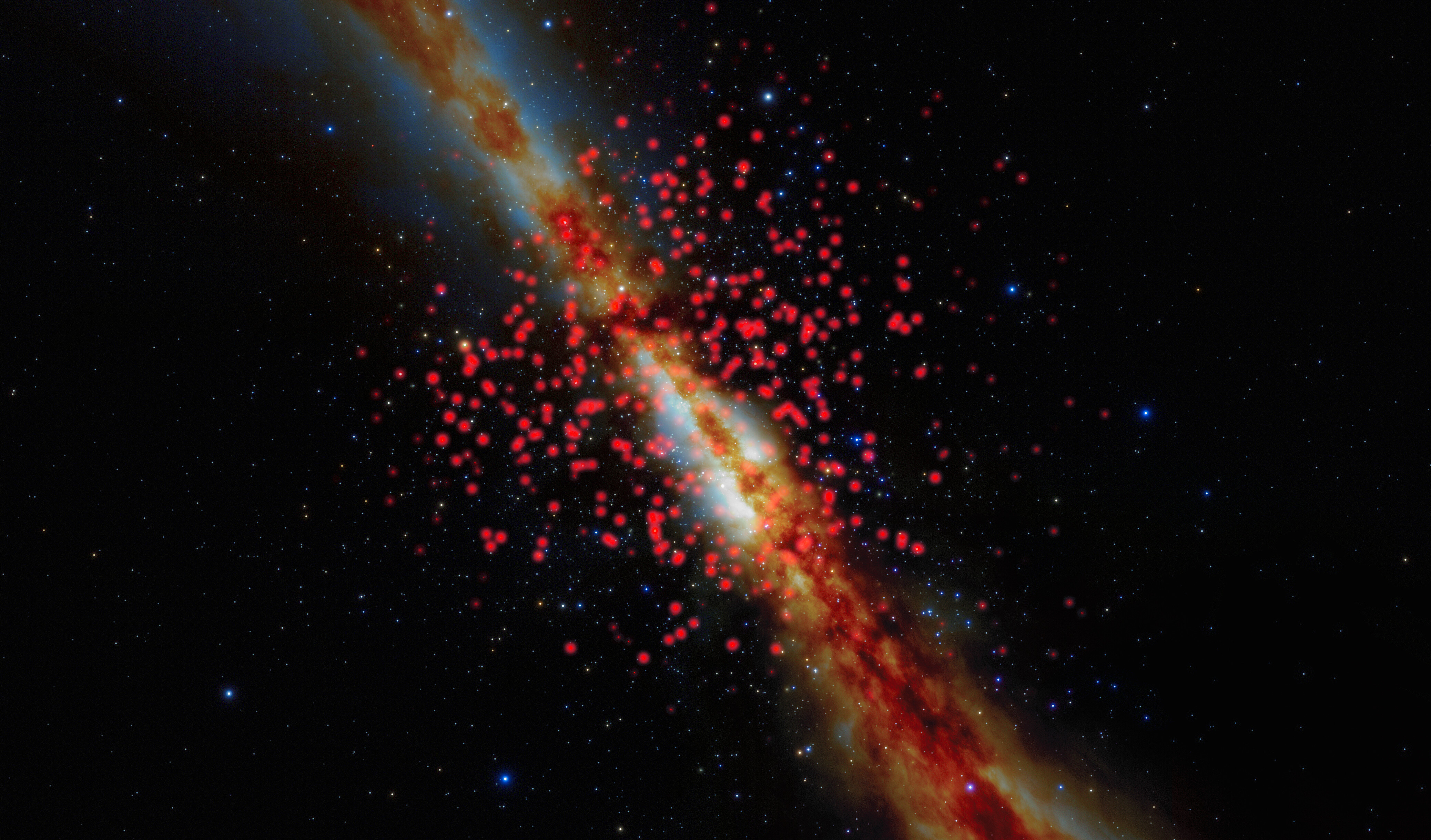 Brown dwarfs in the Sun’s neighborhood. This visualization represents a three-dimensional map of brown dwarfs (red dots) that have been discovered within 65 light-years of the Sun. The Sun, which is not shown, is located at the center of the view. The disk of the Milky Way appears in the background. Other stars close to the Sun appear as variously colored points in the field.

Newswise — Mapping out our own small pocket of the Universe is a time-honored quest within astronomy, and the results announced today have added to this long-running effort by cataloging the locations of more than 500 cool brown dwarfs in the vicinity of the Sun. An international team of astronomers — assisted by the legions of volunteer citizen scientists in the Backyard Worlds: Planet 9 collaboration — have announced an unprecedented census of 525 cool brown dwarfs within 65 light-years of the Sun, including 38 new discoveries. By determining the distances to all the objects in the census, astronomers have been able to build a 3D map of the distribution of cool brown dwarfs in the Sun’s local neighborhood.

This breakthrough relied on novel datasets published by the DESI Legacy Imaging Surveys, which blend huge quantities of astronomical data from a variety of sources: archival images from the Nicholas U. Mayall 4-meter Telescope at Kitt Peak National Observatory (KPNO) and the Víctor M. Blanco 4-meter Telescope at Cerro Tololo Inter-American Observatory (CTIO), which are Programs of NSF’s NOIRLab, plus critical sky maps from NASA's Wide-field Infrared Survey Explorer (WISE). These powerful survey datasets were combined with new distance measurements from the NASA Spitzer Space Telescope to create the best three-dimensional map of the Sun’s local neighborhood to date.

Brown dwarfs are sometimes referred to as “failed stars.” They are thought to form the way stars do, but they do not become massive enough to trigger nuclear fusion in their cores. Their faintness and relatively small sizes make them difficult to identify without careful analysis of data from sensitive telescopes — meaning that many have gone undiscovered until now. However, by finding and studying brown dwarfs, astronomers can learn more about star formation and also about planets around other stars.

“Brown dwarfs are the low-mass byproducts of the process that forms stars, yet the least massive of them have many characteristics in common with exoplanets,” says J. Davy Kirkpatrick, California Institute of Technology scientist and lead author of the research paper. “They're exoplanet laboratories, but since they are usually by themselves and lack the complications caused by a blinding host sun, they're much easier to study.”

To help identify elusive brown dwarfs in massive datasets, astronomers enlisted the help of the Backyard Worlds collaboration, a worldwide network of more than 100,000 citizen scientists [1]. Astro Data Lab at NOIRLab’s Community Science and Data Center (CSDC) was instrumental in providing these volunteers with data, allowing citizen scientists to easily hunt through the astronomical archives in search of brown dwarf candidates. The Backyards Worlds project announced the discovery of almost 100 nearby cool brown dwarfs in August last year, and today’s announcement is a continuation of their work.

One of the most intriguing results of this study is that it provides more evidence that the Sun’s immediate neighborhood (within roughly 7 light-years) is rather unusual. While most stars in the Milky Way are red dwarfs, earlier results revealed that the Sun’s closest neighbors are much more diverse, with different types of objects, from Sun-like stars to Jupiter-like brown dwarfs, appearing in roughly equal numbers.[2] The new results add to this disparity by turning up no more extremely cold brown dwarfs like our close-by neighbor WISE 0855, the coldest known brown dwarf, even though the team expected to find at least several more within 65 light-years of the Sun, given the new study's sensitivity.

This result hints at the possibility that yet more cold brown dwarfs have so far eluded detection. “Thanks to the efforts of volunteers around the world, we have a better idea than ever of the objects in our cosmic backyard,” concluded Meisner. “But we suspect that more of the Sun’s cold and close neighbors still await discovery within our vast data archives.”

[1] Backyard Worlds: Planet 9 is hosted by Zooniverse.
[2] Stars and brown dwarfs are classified by their temperature and other spectral characteristics using letters of the alphabet. For example, our Sun is a G star, a K star is considered an orange dwarf star, and M stars are often called “red dwarfs,” while brown dwarfs are classified as L, T, and Y dwarfs. Earlier studies have revealed that, collectively, the four nearest star systems to the Sun include one G-dwarf star, one K dwarf, two M dwarfs, one L dwarf, one T dwarf, and one Y dwarf.

This research was presented in the paper The Field Substellar Mass Function Based on the Full-sky 20-pc Census of 525 L, T, and Y Dwarfs to appear in The Astrophysical Journal Supplement.

Caption: 3D Map of Brown Dwarfs in the Sun’s Neighborhood. This video visualization depicts the newly published three-dimensional map of brown dwarfs (appearing as red dots) that have been discovered within 65 light-years of the Sun. The beginning of the video shows the location of the Earth at the center of the view, then zooms out into interstellar space, showing the spatial distribution of the brown dwarfs in multiple ways before returning back to the Solar System and Earth at the end.