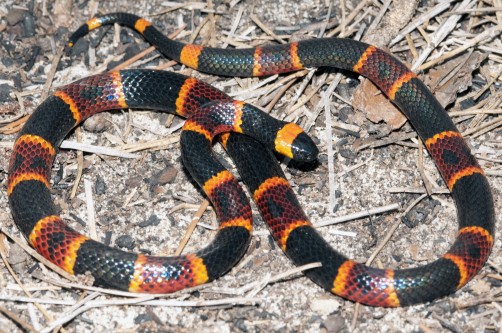 Adult eastern coralsnake from the western panhandle of Florida. 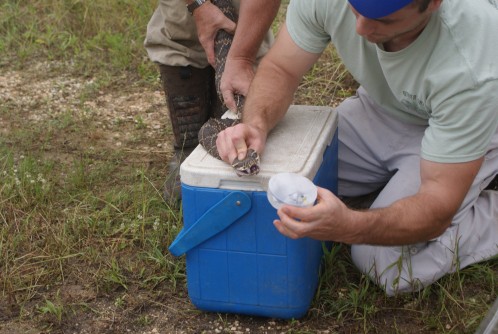 Researchers collecting venom in the field. 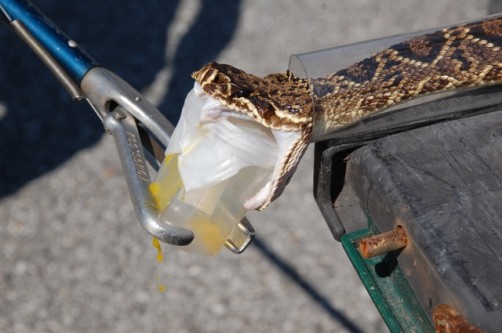 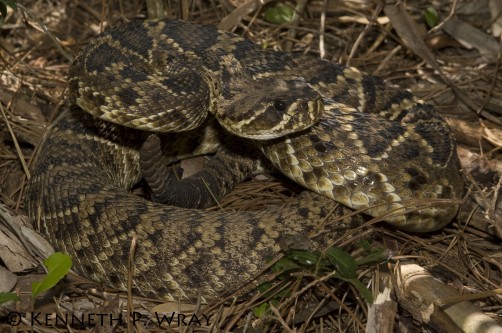 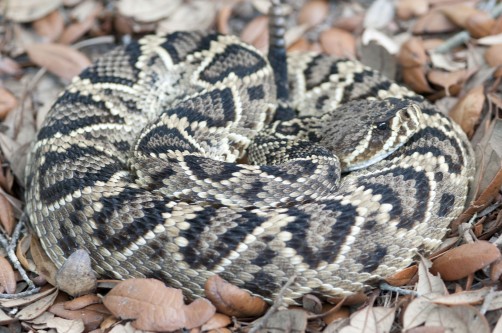 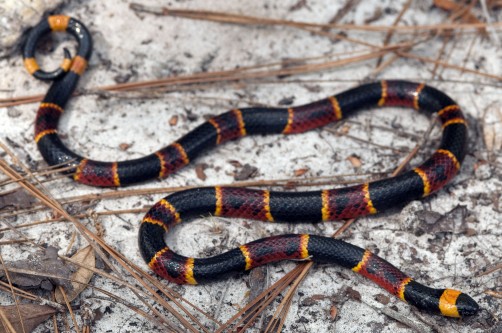 Adult eastern coralsnake from the central panhandle of Florida.

Newswise — Venom from an eastern diamondback rattlesnake in the Everglades is distinct from the cocktail of toxins delivered by the same species in the Florida panhandle area, some 500 miles away. But no matter where you go in the Southeastern United States, the venom of the eastern coral snake is always the same. The results of a large-scale survey of venom variation in the two snake species, published January 8, 2015 in the journal GENETICS, challenge common assumptions in venom evolution research, provide crucial information for rattlesnake conservation, and will help coral snake antivenom development.

Each venomous snake species produces a unique venom, a mixture of around 50-200 toxic proteins and protein fragments that co-evolve with the typical prey of the snake, such as the smaller reptiles eaten by the eastern coral snake or the rodents preferred by rattlesnakes. In this cycle of evolutionary attack and counterattack, any genetic variants that enhance venom resistance tend to spread through the prey population, prompting tweaks to the snake venom recipe that restore its effectiveness.

The result should be distinctive local co-adaptations between predator and prey, as well as considerable regional diversity in the types and amounts of the different venom proteins. But when Darin Rokyta (Florida State University) and his colleagues collected and profiled venom from eastern coral snakes at many sites within Florida, they found no variation at all. The mix of proteins in coral snake venom from one part of the state was indistinguishable from that collected anywhere else. In contrast, eastern diamondbacks, which live in the same parts of the country as the coral snakes, produce venom with different ratios of toxic proteins in nearly every sub-population across their range. For example, two venom components, including one known to cause paralysis in prey, are found at high levels in the northernmost populations, and were completely absent in the snakes from Caladesi Island, near Tampa.

"We were shocked," Rokyta said. "This is the first time anyone has looked at venom variation at this scale, and everybody has assumed that the co-evolutionary arms race would cause local populations to diverge quickly."

Rokyta says there could be several explanations for the lack of variation in eastern coral snake venom. For example, a small population of the species might have recently expanded and taken over the entire range, displacing other populations and reducing genetic diversity. Or it could reflect a difference in co-evolutionary dynamics between the species and its typically reptilian prey, compared to the small mammals preferred by rattlesnakes. The team is now using genetic clues to the population histories of each species to investigate possible explanations.

The results of the study will be helpful to researchers developing eastern coral snake antivenom. Making an antivenom requires samples of venom, but if the mix varies substantially from place to place, this will affect the drug's effectiveness and reliability. For this species, sampling from many populations should not be necessary. "This tells us it doesn't matter where we catch these relatively elusive snakes; we can stick to using those locations where they're easy to find," Rokyta said.

The variation between eastern diamondback populations could provide crucial information to authorities managing the conservation of this species, which is in decline and under consideration for listing as threatened under the Endangered Species Act. Eastern diamondback rattlesnake declines are thought to have been caused by habitat loss compounded by hunting and persecution by humans. The data from this study can be used for population management, to ensure the full range of venom subtypes are conserved for the long-term viability of the species.

"The received wisdom was that venoms are rapidly-evolving, but now we know that's not necessarily the case." said Mark Johnston, Editor-in-Chief of GENETICS. "Clearly, venom evolution in these two snake species has been shaped by different forces. The next challenge is to understand why."

FUNDING Funding was provided by the National Science Foundation (DEB 1145987)