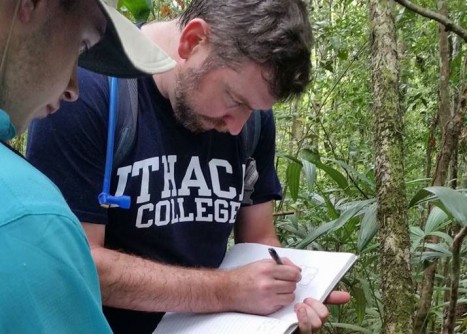 Thomas Garrison jots notes in the jungles of Guatemala.

A comparison of LiDAR data showing the ancient Maya site of El Zotz covered in trees, and with the trees digitally removed.

Newswise — The steamy jungles of northern Guatemala don’t reveal secrets easily. For centuries, the overgrown landscape has protected most of the remains of the Maya who once tamed it—yielding slowly to modern scientists seeking to learn more about the ancient civilization known for its sophisticated hieroglyphic script, art, architecture and mathematics.

The Maya civilization began to emerge about 3,000 years ago, and reached its peak during the Classic Period, from about A.D. 250-900. Now, technology that allows for digital deforestation has uncovered thousands of new Maya structures previously undetected beneath smothering vegetation. For archaeologists like Thomas Garrison, assistant professor of anthropology at Ithaca College, the findings have done far more than recast notions of the size and density of the Central American society.

“Frankly, it's turning our discipline on its head,” he said.

Garrison helped orchestrate the 2016 aerial survey these revelations stem from. The findings and the technology behind them — LiDAR (light detection and ranging) — will be the focus of a new National Geographic documentary to premiere on Feb. 6 at 9 p.m. EST titled “Lost Treasure of the Maya Snake King.” The documentary will follow a NatGeo explorer as he treks deep in the jungle to seek out a pyramid detected in the survey.

Garrison appears in the documentary commenting on the LiDAR mapping and its results. The program will also feature custom-designed images of many of the newly revealed structures, as translated from the data.

Laser Show in the Jungle
LiDAR is a method of mapping from the sky: An airplane-mounted device sends a constant pulse of laser light across a swath of terrain; precise measurements of how long it takes the emitted breams to bounce off surfaces are taken and translated into topographic data.

The laser pierces through the smallest gaps in the vegetation to record the lay of the land below with remarkable accuracy. The resulting data can be tweaked to filter out the trees, thus offering an unencumbered view of everything else on the surface.

The technology is a boon for surveys in jungles like those in lowland Guatemala, where dense canopy hinders other methods of aerial survey and thick undergrowth can conceal the relationship even between known structures.

“In that kind of environment where you can't see [a few feet in front of yourself], it's very hard to piece that all together,” Garrison said. In a swampy area of rolling hillocks rising from the muck, for example: “You have this idea that there's some little stuff on the hills, but the LiDAR lets you see it in its totality.”

The survey of 2,100-square kilometers encompassed several major Maya sites, including the largest at Tikal, and El Zotz, where Garrison focuses his research. The LiDAR mapping revealed over 60,000 previously unknown structures in total, from unknown pyramids, palace structures, terraced fields, roadways, defensive walls and towers, and houses. Archaeologists are realizing that the ancient population centers they’ve spent decades studying are much bigger than they speculated.

“Everyone is seeing larger, denser sites. Everyone,” Garrison said. “There's a spectrum to it, for sure, but that's a universal: everyone has missed settlement in their [previous] mapping.”

Especially telling to Garrison are newly revealed agricultural features that would be necessary to support the lowland Maya population during their centuries of civilization — population estimates have now expanded from a few million to 10-20 million — and defensive structures that suggest warfare was far more prevalent than previously known.

Only the Beginning
The LiDAR survey is a collaboration between archaeologists from the U.S., Europe and Guatemala, and the Fundación PACUNAM (Patrimonio Cultural y Natural Maya), a Guatemalan philanthropic and cultural heritage preservation organization.

Garrison serves as one of the archaeology advisors to the project, and was fundamental in lobbying for the survey, which is now the single largest ever conducted in the field of Mesoamerican archaeology. Fundraising is already taking place for a second LiDAR survey of similar size, he said.

The LiDAR findings are only the beginning. There is still much to discover about the rise, peak and fall of the Maya civilization. The LiDAR data points to new areas where those answers may be found through fieldwork and excavation.

“That's the challenge now. Now we have so much data,” Garrison said.  “How do we handle it and how do we move forward with it? We've still got to get to those places, we've still got to check them out.

“It's difficult to convey how exciting this time is for us.” 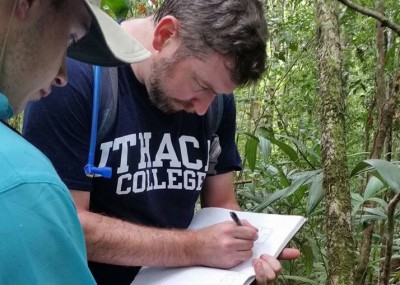 Caption: Thomas Garrison jots notes in the jungles of Guatemala.

Caption: A comparison of LiDAR data showing the ancient Maya site of El Zotz covered in trees, and with the trees digitally removed.