Mapping the Path of Climate Change

A probabilistic framework is used to understand how climate change progresses under the influence of the greenhouse effect and other factors. 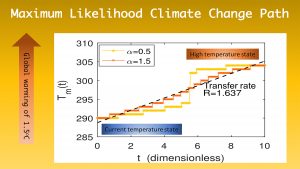 The maximum likelihood transition from the current temperature state to the warmer one for global warming, under the influence of Levy noise and the greenhouse effect. (y-axis is temperature in Kelvin; x-axis is time in undetermined segments)

Newswise — WASHINGTON, January 22, 2020 – Since 1880, the Earth’s temperature has risen by 1.9 degrees Fahrenheit and is predicted to continue rising, according to the NASA Global Climate Change website. Scientists are actively seeking to understand this change and its effect on Earth’s ecosystems and residents.

In Chaos, by AIP Publishing, scientists Yayun Zheng, Fang Yang, Jinqiao Duan, Xu Sun, Ling Fu and Jürgen Kurths present detailed research on climate change shifts, describing the mechanisms behind abrupt transitions in global weather. Predicting a major transition, such as climate change, is extremely difficult, but the probabilistic framework developed by the authors is the first step in identifying the path between a shift in two environmental states.

The researchers develop a climate change model based on probabilistic framework to explore the maximum likelihood climate change for an energy balance system under the influence of greenhouse effect and Lévy fluctuations. These fluctuations, which can present themselves as volcanic eruptions or huge solar outbreaks, for example, are suggested to be one factor that can trigger an abrupt climatic transition.

Some results of these noise fluctuations are the rapid climate changes that occurred 25 times during the last glacial period, a series of pauses in geophysical turbulence, and protein production in gene regulation, which occurs in bursts.

“Although the climate changes may not easily be accurately predicted, we offer insights about the most likely trend in such changes for the surface temperature,” said Duan. “In the present paper, we have uncovered that the maximum likelihood path, under an enhanced greenhouse effect, is a step-like growth process when transferring from the current temperature state to the high temperature one.”

By understanding the step-like growth process of the greenhouse effect, the authors can map out the path that climate changes may take. The researchers found larger influences of noise fluctuations can result in abrupt shifts from a cold climate state to a warmer one.

“The maximum likelihood path will be expected to be an efficient research tool, in order to better understand the climate changes under the greenhouse effect combined with non-Gaussian fluctuations in the environment,” said Duan.

The article, "The maximum likelihood climate change for global warming under the influence of greenhouse effect and Lévy noise," is authored by Yayun Zheng, Fang Yang, Jinqiao Duan, Xu Sun, Ling Fu and Jürgen Kurths. The article appears in Chaos (DOI: 10.1063/1.5129003) and can be accessed at https://aip.scitation.org/doi/10.1063/1.5129003.