Professor Jeff Bergen calculates chances of predicting all 63 games correctly at one in 9.2 quintillion 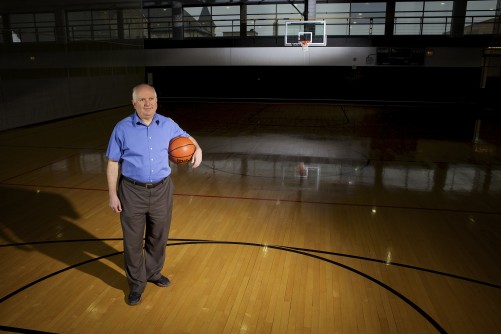 DePaul University mathematics professor Jeff Bergen determined the odds of predicting a perfect bracket in this March's NCAA men's basketball tournament to be one in 9.2 quintillion.

Newswise — CHICAGO — As college basketball fans get set to fill out their brackets this March Madness, DePaul University mathematics professor Jeff Bergen offers some perspective on the odds of creating the perfect bracket. It’s more likely, said Bergen, to win Powerball and Mega Millions in the same week buying just one ticket for each game than to pick all 63 games correctly in this year’s NCAA men’s basketball tournament.

Using a standard bracket that asks fans to predict the results of 63 games played from mid-March to early April, Bergen calculated that someone filling out a bracket has a one in 9.2 quintillion — or more accurately one in 9,223,372,036,854,775,808 — chance to correctly pick the results of all of the games. He reached his answer by raising two, as in the number of possible winners in each game, to the 63rd power.

“The thing that makes March Madness so interesting to me is that the person who watches college basketball until four in the morning really doesn’t have a better shot at a perfect bracket than someone who doesn’t watch college basketball at all,” said Bergen.

To emphasize further just how unlikely it is to predict a perfect bracket, Bergen determined some other hard to imagine occurrences that are more likely to happen:

“To put the number 9.2 quintillion into perspective, if every person on the planet (about 7.5 billion) began filling out one bracket per minute, it would take over 2,300 years to fill out 9.2 quintillion brackets,” Bergen said.

Bergen realizes that many may look at his calculations and think they have a better chance at a perfect bracket because they follow basketball and the annual tournament closely. However, knowing that a No. 1 seed has never lost to a No. 16 seed, or that a No. 2 seed has only lost to a No. 15 seed eight times in 132 opportunities can only help so much, he said.

“With tournament knowledge like that, the odds of picking a perfect bracket increase to about one in 128 billion,” Bergen said.

A new wrinkle to bracket picking has popped up in recent years, with online websites offering different ways to computer generate a bracket. One option has the underdog in mind, with all lower seeds advancing throughout the tournament. However, the odds of all lower seeds advancing out of just the first round are even more unlikely than predicting a perfect bracket, said Bergen. How unlikely? About 3 million times more unlikely than the 9.2 quintillion chance of a perfect bracket, he said.

“I don’t want to come across as a mathematician trying to ruin the fun of March Madness. The idea is to have fun, even if you probably aren’t going to get a perfect bracket. Usually you just want to do the best out of your family or a group of friends. Just enjoy the games and comradery,” Bergen advised.

“I’ve been a sports fan for a really long time, so I don’t mind playing with these crazy numbers,” said Bergen. “People get fascinated with the magnitude of the numbers, but the math is not that complicated. It’s just bigger numbers than we usually come across in daily life. I would like to demystify how I got the 9.2 quintillion answer because it would be nice if at every middle or high school the students were coming up with this answer.”

Nicknamed March Madness due its often-unpredictable nature, the NCAA Tournament begins March 13 with the “First Four,” which features four games not included in traditional brackets, to trim the 68-team field to 64. The announcement of the 68-team field is set for March 11. The Final Four begins March 31 with the national championship game held April 2 in San Antonio, Texas.

Watch Bergen break down the numbers at http://depaulne.ws/MarchMadness_2018.