Marine Mammals on the Menu in Many Parts of World

According to a recent study by conservationists from the Wildlife Conservation Society and Okapi Wildlife Associates, people in at least 114 countries since 1990 have consumed one or more of at least 87 marine mammal species, including small cetaceans such as the Indo-Pacific humpback dolphin. 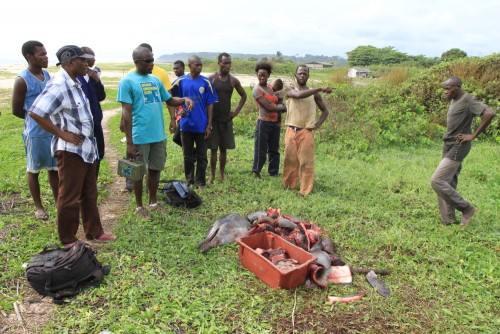 Local fishers in Brazzaville in the Republic of Congo with a butchered Atlantic humpback dolphin, a West African endemic that has been extirpated from much of its range as fisheries decline and people shift to other sources of protein. 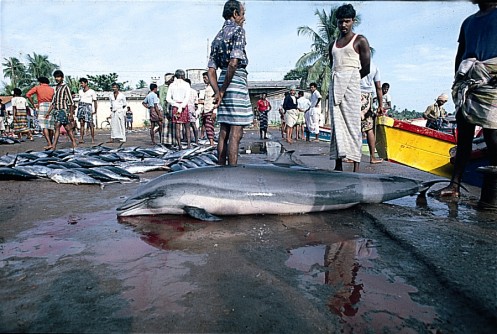 Obscure species such as Fraser’s dolphin (seen here in a fishing market in Sri Lanka) are being increasingly utilized as food in areas impacted by food insecurity and/or poverty.

Newswise — The fate of the world’s great whale species commands global attention as a result of heated debate between pro and anti-whaling advocates, but the fate of smaller marine mammals is less understood, specifically because the deliberate and accidental catching and killing of dolphins, porpoises, manatees, and other warm-blooded aquatic species are rarely studied or monitored.

To shed more light on the issue, researchers from the Wildlife Conservation Society and Okapi Wildlife Associates have conducted an exhaustive global study of human consumption of marine mammals using approximately 900 sources of information. The main finding: since 1990, people in at least 114 countries have consumed one or more of at least 87 marine mammal species.

The new global study appears in the most recent edition of Biological Conservation. The authors include: Dr. Martin D. Robards of the Wildlife Conservation Society; and Dr. Randall R. Reeves of Okapi Wildlife Associates.

“International regulatory bodies exist to gauge the status of whale populations and regulate the hunting of these giants,” said Robards, lead author of the study. “These species, however, represent only a fraction of the world’s diversity of marine mammals, many of which are being accidentally netted, trapped, and—in some instances—directly hunted without any means of tracking as to whether these off-takes are sustainable.”

In order to build a statistically robust picture of human consumption rates of marine mammals around the world, Robards and Reeves started with records on small fisheries focused on small whales (i.e. pilot whales), dolphins, and porpoises from 1975 and records of global marine mammal catches between 1966 and 1975. From there, the authors consulted some 900 other sources and consulted with numerous researchers and environmental managers, an exhaustive investigation that took three years to complete. The team only counted information with actual evidence of human consumption of marine mammals, omitting instances where marine mammals were caught (either intentionally or not) for fishing bait, feed for other animals, medicines, and other uses.

The list of marine mammals killed for human consumption includes obscure species such as the pygmy beaked whale, South Asian river dolphin, narwhal, Chilean dolphin, long-finned pilot whale, and Burmeister’s porpoise. Seals and sea lions are on the list as well, including species such as the California sea lion and lesser known species such as the Baikal seal. The polar bear (a bear that is considered a marine mammal) also makes the list. Three species of manatee and its close relative the dugong, considered a delicacy in some parts of the world, are also widespread targets of human consumption.

Overall, the historical review reveals an escalation in the exploitation of smaller cetaceans, particularly coastal and estuarine species since 1970, often caught accidentally as “bycatch” in nets meant for fish and other species. Once caught, however, small cetaceans are increasingly utilized as food in areas of food insecurity and/or poverty, what the authors call “fishing up the food chain.”

“Obviously, there is a need for improved monitoring of species such as Atlantic and Indo-Pacific humpback dolphins and other species,” said Dr. Howard Rosenbaum, Director of WCS’s Ocean Giants Program. “In more remote areas and a number of countries, a greater immediate need is to understand the motivations behind the consumption of marine mammals and use these insights to develop solutions to protect these iconic species that lead to more effective management and conservation.”

In addition to this global review, Wildlife Conservation Society scientists work in remote countries around the world to assess and actively address the threat to dolphin populations with localized, applied conservation efforts. WCS’s Ocean Giants Program works in a number of seascapes of critical importance to small cetaceans in particular. These efforts are focused on the local level to address local impacts on coastal dolphin populations, providing on-the-ground practical conservation actions to complement the global investigative work highlighted above.

In Congo, Gabon, and Madagascar, WCS Conservation Scientists Dr. Salvatore Cerchio and Tim Collins are conducting scientific studies to assess the status of impacted dolphin populations and working with local communities of traditional fishermen to reduce accidental bycatch and deliberate hunting of dolphins. In these regions, the scientists are documenting a worrying trend in increased captures and use of dolphins for food, and they are sometimes also being sold in markets better known for their association with terrestrial bushmeat.

In response, Cerchio and the WCS Madagascar team have worked with local communities to establish a local conservation association composed of fishermen, local traditional laws protecting dolphins, and the development of community-based whale and dolphin watching as an alternative livelihood. On the other side of the African continent, the coasts of Gabon and Congo represent one of the last strongholds for the rare Atlantic humpback dolphin. Catches by fishermen in Gabon are extremely rare, but groups of dolphins that cross the border (a finding of recent WCS work) risk capture in coastal gillnets set by artisanal fisherman. “The Atlantic humpback dolphin may well be the rarest mammal in the Congo basin region,” said Tim Collins. “Unfortunately, few have ever heard of it, least of all the fisherman eating them out of existence.”