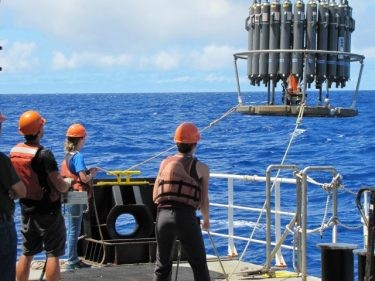 The research team collects samples during a 2015 cruise in the North Pacific. Co-author Bryndan Durham, center, recovers the sampling instrument. The gray bottles open and close at specific depths to collect seawater samples. 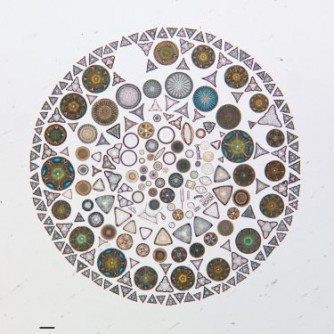 Microscopic marine life includes genetically diverse lifeforms. This image shows diatoms, a type of microalgae, collected in Russian waters and arranged on a microscope slide in 1952 by Albert Brigger. The scale bar is one-tenth of a millimeter.

Newswise — Just as plants and animals on land are keenly attuned to the hours of sunlight in the day, life in the oceans follows the rhythms of the day, the seasons and even the moon. A University of Washington study finds the biological light switches that make this possible.

Single-celled organisms in the open ocean use a diverse array of genetic tools to detect light, even in tiny amounts, and respond, according to a study published Feb. 1 in the Proceedings of the National Academy of Sciences.

Though invisible to the human eye, ocean microbes support all marine life, from sardines to whales. Knowing these communities’ inner workings could reveal how they will fare under changing ocean conditions.

“Just like rainforests generate oxygen and take up carbon dioxide, ocean organisms do the same thing in the world’s oceans. People probably don’t realize this, but these unicellular organisms are about as important as rainforests for our planet’s functioning,” Coesel said.

By analyzing RNA filtered out of seawater samples collected throughout the day and night, the study identifies four main groups of photoreceptors, many of them new. This genetic activity uses light to trigger changes in the metabolism, growth, cell division, movements and death of marine organisms.

The discovery of these new genetic “light switches” could also aid in the field of optogenetics, in which a cell’s function can be controlled with light exposure. Today’s optogenetic tools are engineered by humans, but versions from nature might be more sensitive or better detect light of particular wavelengths, the researchers said.

“This work dramatically expanded the number of photoreceptors — the different kinds of those on-off switches — that we know of,” said senior author Virginia Armbrust, a UW professor of oceanography.

Not surprisingly, many of the new tools were for light in the blue range, since water filters out red wavelengths (which is why oceans appear blue). Some were also for green light, Coesel said.

The researchers collected water samples far from shore and looked at all genetic activity from protists: single-celled organisms with a nucleus. They filtered the water to select organisms measuring between 200 nanometers to one-tenth of a millimeter across. These included photosynthetic organisms, like algae, which absorb light for energy, as well as other single-celled plankton that gain energy by consuming other organisms.

The team collected samples every four hours, day and night, for four days in the North Pacific near Hawaii. Researchers used trackers to follow the currents about 50 feet (15 meters) below the surface so that the samples came from the same water mass.

The study also looked at samples that came from a depth of 120 and 150 meters (400 and 500 feet), in the ocean’s “twilight zone.” Even there, the genetic activity showed that the organisms were responding to very low levels of sunlight.

While the sun is up, these organisms gain energy and grow in size, and at night, when the ultraviolet light is less damaging to their DNA, they undergo cell division.

“Daylight is important for ocean organisms, we know that, we take it for granted. But to see the rhythm of genetic activity during these four days, and the beautiful synchronicity, you realize just how powerful light is,” Armbrust said.

Future work will look at places farther from the equator, where plankton communities are more subjected to the changing seasons.

This research was funded by the Simons Foundation and the National Science Foundation’s Extreme Science and Engineering Discovery Environment program. Other co-authors are Ryan Groussman, Rhonda Morales and François Ribalet at the UW; Bryndan Durham at the University of Florida; Sarah Hu at Woods Hole Oceanographic Institution; and David Caron at the University of Southern California.