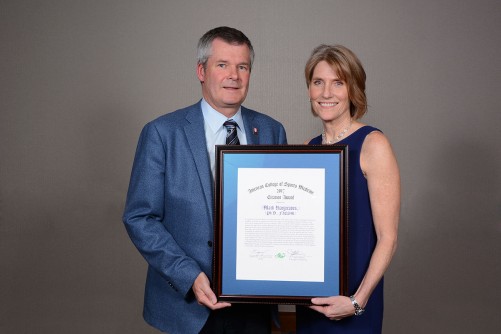 Newswise — INDIANAPOLIS, IN- The American College of Sports Medicine is pleased to announce that Mark Hargreaves, Ph.D., FACSM is a recipient of its 2017 Citation Award. Dr. Hargreaves was selected for this award because of his significant contributions to sports medicine and the exercise sciences. He was recognized at an awards banquet during the association’s recent annual meeting.

Dr. Hargreaves is a professor of physiology at the University of Melbourne in Australia. Dr. Hargreaves received his masters’ degree in exercise physiology from Ball State University in 1984 and his Ph.D. in physiology from the University of Melbourne in 1989. His research interests lie in unraveling the cellular mechanisms that regulate muscle metabolism during exercise and with training and nutritional manipulations. To answer these research questions, he has used a variety of experimental protocols, including application of molecular and cellular techniques to exercise studies in human subjects. His research has been funded by the Australian Sports Commission, the National Health and Medical Research Council (of Australia), the Australian Research Council and the Diabetes Australia Research Trust and has resulted in more than 120 peer-reviewed publications and over 65 book chapters and invited reviews. His work has been cited more than 5,600 times.

Dr. Hargreaves has received several accolades including the ACSM’s Young Investigator Award (1994) and the Australian Physiological Society’s McIntyre Prize (1994). Dr. Hargreaves has served on ACSM’s Board of Trustees as foreign corresponding editor of Medicine & Science in Sports & Exercise®, associate editor of Exercise and Sport Sciences Reviews and consulting editor of the Journal of Applied Physiology.

Dr. Hargreaves’ Citation Award is one of six that were given this year. Other recipients include: