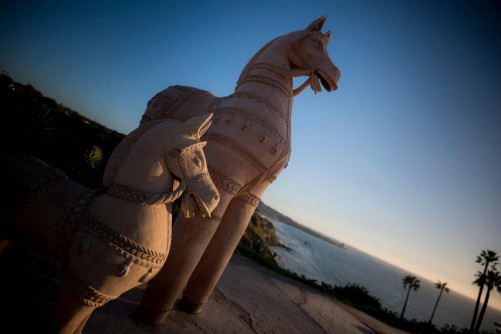 These beautifully crafted, nearly life-size terra cotta horses live at UC San Diego’s Geisel House, a reminder of the immense vision and passion that Martha Longenecker Roth had for the art of the people. 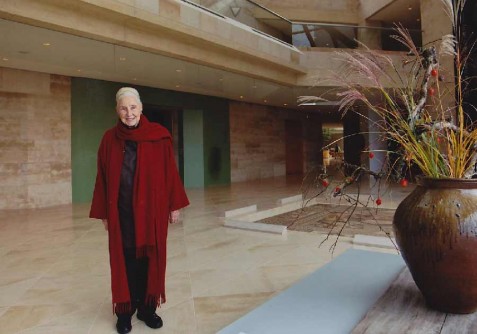 Newswise — They live on the property of Geisel House, the chancellor’s residence at the University of California San Diego. Beautifully crafted, nearly life-size terra cotta horses majestically overlook the Pacific Ocean as a reminder of the immense vision and passion that Martha W. Longenecker Roth had for “mingei”—the art of the people.

The horses are just a sampling of the vast collection of eclectic folk art that she collected in her travels throughout the world. Longenecker Roth’s life was multifaceted, encompassing work as an artist, educator and museum director. After a career teaching at San Diego State University, she founded the Mingei International Museum in 1978, inspired by the teachings of the revered 20th century Japanese scholar Soetsu Yanagi, who coined the term mingei, “min” meaning all people and “gei” meaning art.

When she passed away in October 2013, her cousin Ana Smythe established the Martha Longenecker Roth Distinguished Artist-in-Residence Endowment at UC San Diego as a fitting tribute to a woman who had loved La Jolla and the university. The program will bring exceptionally talented, high caliber artists to the Department of Visual Arts to practice, present to and instruct students during a critical stage of their artistic development.

“The artist-in-residence endowment is all about Martha,” said Smythe. “Although her estate was left in my name, I believe her intent was to ensure it was used to carry on her life’s work. I’d like to both meet her intent while simultaneously creating a legacy to Martha’s incredible life and accomplishments.” Smythe sold the house, its furnishings and art to fund the endowment. “She was a brilliant visionary who cared. Now, her name and vision will live on at UC San Diego.”

“I had the fortune of meeting Martha Longenecker Roth, and calling her a friend,” said UC San Diego Chancellor Pradeep K. Khosla. “A talented artist herself, she appreciated art throughout the world. But many may not know that technology fascinated her as well, and she frequently attended lectures and events on our campus. We thank Ana Smythe for continuing Martha’s wonderful legacy through an endowed artist-in-residence in our Division of Arts and Humanities.”

Smythe explained, “There were several reasons why I chose UC San Diego: its location in La Jolla, the university’s international community, and equally important, the cutting-edge technology—which was just so much a part of who she was. Martha felt UC San Diego was so forward thinking, and she was so impressed by how they brought education to a new level.

“Martha traveled throughout the world, but it was her incredible eye that made all the difference,” she said. “Whether she selected a piece of textile, or an ancient rock, each item held great beauty. Everything in her home was of the people—a magnificent silk screen or a piece of Japanese pottery, an intricate southwest rug or basket, an incredible Tonsu or simple mask. Each was to be used as intended and she did!”

Throughout her life as an artist, teacher and director of the Mingei International Museum, Longenecker Roth was a power to be reckoned with. “She was incredible, but no-nonsense to the point, too,” laughs Smythe.

“I loved Martha —as did so many others,” she said. “We had a Celebration of Life at her home after she died, and it was probably one of the most poignant events of my life. It was a glorious San Diego day, and more than a hundred of her friends were there. There wasn’t a person who came whose life Martha had not impacted and influenced for the better. She had an amazing gift when it came to connecting with people and gaining their love and loyalty. Although incredibly strong, the legacy she left was of a woman who accomplished much, touched many and made a difference.”

Smythe added, “When we had the estate sale at her home, there was a line from the night before all the way down the street, people coming to buy just a little piece of Martha. Each had a story to tell—the students she had taught, the docents from the museum, local business people and artisans —they all had vivid memories of their time with Martha that they wanted to share. The constant refrain was one of mutual respect and genuine care.”

The endowment Smythe envisioned at UC San Diego is a tribute, in perpetuity, to Longenecker Roth. “She was a teacher, she was an artist, and she embraced the totality of our world,” her cousin said. “Education is a common thread that unites all cultures. UC San Diego does it so beautifully. I find that’s one of the things she loved most. In the spirit of Martha’s historic impact on the visual arts in both local and global communities, this permanently endowed program will extend her legacy to generations of aspiring artists and the legions of audiences and visitors impacted by their work.”

Arts and Humanities Dean Cristina Della Coletta said, “Through its dedication to creativity and the role it plays in our shared cultural life, the Department of Visual Arts will be the standard bearer for values shared by Martha Longenecker and so many she touched. We are honored to carry on the legacy of her life.” The artist-in-resident program at UC San Diego is expected to start in the fall of 2018.

Born May 18, 1920 in Oklahoma City, Okla., Longenecker Roth studied art most of her life. After earning a Bachelor of Arts degree from UCLA, she attended Claremont Graduate School, where she studied painting with Millard Sheets and earned an art education credential and a Master of Fine Arts degree. She stayed in Claremont after graduating, setting up a ceramics studio in the then-small town 40 miles east of Los Angeles, crafting wheel-thrown stoneware forms that were exhibited and sold nationally for 20 years until 1964.

Her first direct contact with Mingei came during the summer of 1952 when she met 20th century Japanese scholar Soetsu Yanagi, Japanese potter Shoji Hamada and British potter Bernard Leach who were on a world tour lecturing and demonstrating pottery to local craftsmen.In 1955, San Diego State invited Longenecker Roth to develop the school’s ceramics program. As a professor of art, she taught ceramics and design history, was the director of the gallery program and supervisor of the college’s student art teachers. Following her first visit to Japan, she invited several international “living treasures”—including Hamada—to lecture, exhibit and demonstrate their art for her San Diego State art students.

The Mingei International Museum evolved from Longenecker Roth’s vision to establish an organization that would facilitate these cultural exchanges. She created a nonprofit in 1974 with the funds provided by her husband, Sydney Martin Roth. In 1978, she founded the museum. She retired in 2005 after nearly 30 years as director.

In May of 2017, Christie’s will hold an auction of a significant number of select items from Longenecker Roth’s estate. The proceeds from this event will further fund the Longenecker Roth Distinguished Artist-in-Residence Endowment. Smythe said that she plans to continue to grow the endowment to ensure that the program will continue in perpetuity at UC San Diego.

To learn more about supporting UC San Diego’s Division of Arts and Humanities, please visit the giving website at https://artsandhumanities.ucsd.edu/giving. 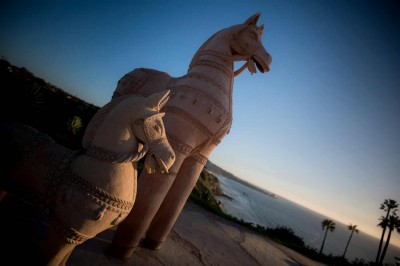 Caption: These beautifully crafted, nearly life-size terra cotta horses live at UC San Diego’s Geisel House, a reminder of the immense vision and passion that Martha Longenecker Roth had for the art of the people. 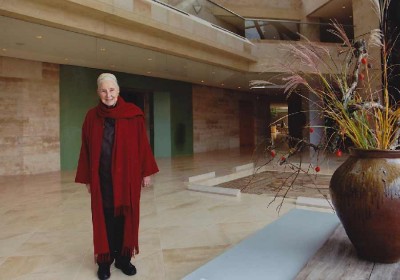