Child care centers are the foundation for healthy living 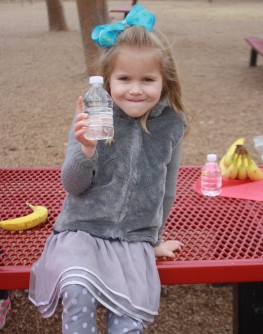 Raise your glass to water!

Newswise — Annapolis — Tens of thousands of Maryland children who attend licensed child care centers will enjoy healthier drink choices and activities starting next year, thanks to a bill passed by the Maryland General Assembly and signed today by Governor Martin O’Malley.

The “Child Care Centers – Healthy Eating and Physical Activity Act” requires centers to provide healthier drinks to children in their care, better support mothers who are breastfeeding, and reduce non-educational screen time. Many of these standards are based on the successful “Healthy Child Care” program in Howard County.

“It is critically important to ensure our kids start their lives on a healthy path,” said Nicolette Highsmith Vernick, president and CEO of the Horizon Foundation, which advocated for the bill. “Thanks to the leadership from the General Assembly, in particular the legislation’s sponsors, we can ensure that the healthy behaviors parents are instilling in their kids at home will be reinforced in their child care centers.”

The legislation was promoted by Sugar Free Kids Maryland, a new statewide advocacy group founded by MedChi, the American Heart Association, the NAACP, and the Horizon Foundation to reduce the twin epidemics of childhood obesity and teen diabetes. The bill, sponsored by Senator Bill Ferguson and Delegate Alonzo Washington, passed both houses of the General Assembly with resounding majorities.

In addition to Sugar Free Kids Maryland, the legislation had the support of both the Maryland State Child Care Association and the Maryland State Department of Education, which oversees licensed child care centers and will develop regulations to implement the new standards.

With one in three children classified as overweight or obese in Maryland and almost a quarter of teens being diagnosed with type 2 diabetes nationally, Sugar Free Kids is focused on enacting evidence-based policies to reverse these critical public health problems.

“The obesity rate in children has tripled in recent years and the incidence of diabetes has increased seven fold,” said Dr. Brian Avin, immediate past president of MedChi. “This legislation will improve the long-term health of thousands of Maryland children by restricting the availability of sugary drinks, decreasing screen time and increasing physical activity when our children attend child care centers.”

“Coronary artery disease begins in childhood and, according to American Heart Association research, the plaques that will stay with us for life have formed by the time a child has become a teenager,” said Michaeline Fedder, Director of Government Relations for the American Heart Association — Mid- Atlantic Affiliate. “It makes sense, therefore, that the time to learn healthy behaviors is in early childhood, and child care centers are ideal venues in which healthy habits can be formed and reinforced.“

Statistics also show that minority and low-income children are disproportionately affected by obesity and diabetes, and the toll these problems take on children and their families, not to mention the nation as a whole, is immense. Psychologically, children and adolescents who are obese or overweight are targets of early and systematic social discrimination, leading to low self-esteem, which can hinder academic and social growth and functioning. Physically, obese young people have an 80 percent chance of being obese adults and are more likely than children of average weight to become significantly overweight or obese adults, and therefore more at risk for associated adult health problems.

“Children from communities of color are disproportionately impacted by rising rates of obesity and teen-age onset diabetes, both of which can become chronic conditions that impact them for a lifetime. For these reasons and more, the Maryland State Conference of the NAACP salutes the legislature for passing the Healthy Child Care bill. We are confident it will improve the health of young Marylanders for decades to come.” said Isazetta Spikes, Health Chair of the Maryland State Conference of the NAACP.