Massive Fires Remain Destructive After the Burn Has Gone 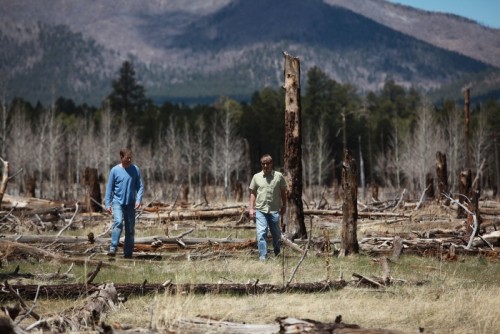 NAU forest ecologists Mike Stoddard, left, and Matthew Hurteau are concerned that ponderosa pine forests are not regenerating after unnaturally intense fires that burn through the treetops, like the Hochderffer Fire that burned 16,000 acres 15 years ago.

Newswise — This season’s massive Arizona fires making headlines around the globe have destroyed dozens of structures and burned nearly three-quarters of a million acres.

They also are contributing to global warming, scientists say, by upsetting the carbon balance while they are burning and for years to come.

Trees breathe in carbon dioxide, but how long they hold onto it affects the amount of greenhouse gases in the atmosphere.

Charred logs, standing dead tree trunks and decaying branches mark the site of the 1996 Hochderffer Fire, a “crown fire” that burned hot through 16,000 acres west of the San Francisco Peaks north of Flagstaff.

Mike Stoddard, a forest ecologist with the Northern Arizona University Ecological Restoration Institute, has been looking for a sign, any sign, of ponderosa pine seedlings 15 years after the fire.

“These large fires are devastating our forests,” Stoddard said. “We’re concerned that ponderosa pine is not regenerating after these wildfire events.”

Scientists also are concerned about the invisible impacts of crown fires.

In a study conducted from 2001 to 2007, forest ecologist Matthew Hurteau with NAU’s School of Earth Sciences and Environmental Sustainability found that the nation’s wildfire emissions were the equivalent of 4 percent to 6 percent of all emissions from burning coal, oil and natural gas. The percentage of lingering emissions is even greater.

“We’re looking to forests to take in carbon, thereby lowering the greenhouse gases. But at a site like the Hochderffer Fire, the grassy vegetation that’s growing in is not making up for the amount of carbon that’s being released from the dead trees,” he said.

Across Arizona Highway 180, the story is much the same. NAU forestry professor Tom Kolb is calculating the amount of carbon dioxide moving between the land and the air at the site of the Horseshoe Fire. This 8,000-acre crown fire also burned in 1996.

“The fire has had a long-term legacy effect on the capacity of this site to take in and store carbon dioxide,” Kolb said. “This site has gone from being a carbon sink, where carbon was being stored, to a carbon source, where carbon is being released.”

With carbon making up about half the dry weight of a tree, researchers say overstocked ponderosa pine thickets can store a lot of carbon, at least for a while.

“Storing carbon in lots of little trees in a dense forest is like investing your retirement funds in junk bonds. It’s risky,” Hurteau said. “Our research has shown that if we reduce the amount of trees per acre and return ground fire to the system to manage those surface fuels, the carbon left in the live trees is much more stable because it’s less vulnerable to crown fire.”