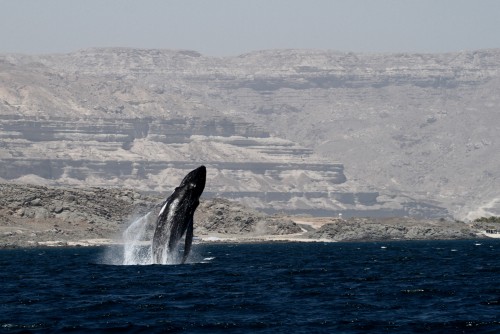 A whale breaches in the Arabian Sea, home to the smallest and most isolated humpback whale population in the world, with less than 200 individuals remaining. 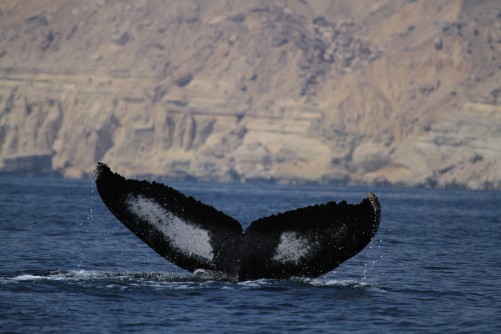 A humpback whale dives in the Arabian Sea.

Newswise — Scientists have published one of the largest genetic studies ever conducted on the humpback whale (Megaptera novaeangliae) for the purpose of clarifying management decisions in the Southern Hemisphere and supporting calls to protect unique and threatened populations, according to WCS (Wildlife Conservation Society), the American Museum of Natural History, Columbia University, and other organizations.

Using data generated from more than 3,000 skin samples from individual whales ranging from the South Atlantic to the Indian Oceans, the research team has uncovered previously unknown degrees of relatedness between different whale populations. The study will also help inform ongoing conservation reassessments of humpback whale populations, and reaffirms the highly distinct nature of a small, non-migratory population of humpback whales living in the Arabian Sea in need on continued protection.

Field research on marine mammals is one of the most challenging of biological studies, primarily because scientists are often unable to follow ocean-going species such as whales across their full range; the humpback whale in particular undertakes some of the longest migratory movements of any mammal. While techniques such as remote sensing devices placed on individual whales, photo-recognition of individuals, and other methods can help answer some questions of where whale species travel, molecular technologies can reveal secrets at a broader level, sometimes representative of entire populations.

“By comparing carefully selected markers in the DNA of thousands of whales in the Southern Hemisphere, we can begin answering questions about the movements of these animals and how different populations are related,” said lead author Dr. Francine Kershaw, formerly of Columbia University and now a Science Fellow at the Natural Resources Defense Council. “Genetic data provide unique information necessary for effective species management and conservation.”

In this study, researchers accumulated skin samples from 3,188 individual whales from 12 different locations in the South Atlantic and Indian Oceans. Some of the samples were collected with biopsy darts and others were acquired from skin sloughed off by animals and collected by researchers.

Overall, the results of the study help to evaluate the validity of current definitions of breeding stocks used by the International Whaling Commission to formulate effective management decisions and recommendations. Most recently, they are being used to demonstrate how to better identify Important Marine Mammal Areas in need of protection, an initiative being led by the IUCN (International Union for Conservation of Nature).

The analysis revealed more connectivity between Breeding Stocks B and C (located on opposite sides of the African continent) than expected. The authors point out that the findings support previous observations of individual male whales moving between populations in different ocean basins, and that subpopulations from both regions could share the same feeding ground in Antarctic waters. The findings also support recommendations for the recognition and inclusion of subpopulations (such as the substocks in Breeding Stock C in the Madagascar/Southwestern Africa region of the Indian Ocean) in management decisions for humpback whales in the Southern Hemisphere.

Further, the findings of the new study confirm the unique nature of Arabian Sea humpback whales, which recently was listed as ‘Endangered’ under the US Endangered Species Act by evaluating extinction risk of this discrete population. The authors recommend that the small population numbering fewer than 200 whales be made a conservation priority. According to the revised listings, all but four of humpback whale populations globally are recovering.

“After 50 years of international protection, a number of humpback whale populations are beginning to recover in the Southern Hemisphere and other regions,” said Dr. Howard Rosenbaum of WCS’s Ocean Giants Program. “Refining our understanding of these populations will help us determine protection measures for these great whales as they face new threats while recovering from an extended period of previous whaling.”

Growing up to 50 feet in length, the humpback whale is a baleen whale known for its acrobatic behavior as well as its songs, the most complex of any great whale. The species was seriously depleted by commercial whaling fleets before being internationally protected in 1966. Humpback whales are still at risk from indirect threats such as pollution, fishing gear entanglement, shipping, and underwater noise.

WCS (Wildlife Conservation Society)MISSION: WCS saves wildlife and wild places worldwide through science, conservation action, education, and inspiring people to value nature. To achieve our mission, WCS, based at the Bronx Zoo, harnesses the power of its Global Conservation Program in nearly 60 nations and in all the world’s oceans and its five wildlife parks in New York City, visited by 4 million people annually. WCS combines its expertise in the field, zoos, and aquarium to achieve its conservation mission. Visit: newsroom.wcs.org Follow: @WCSNewsroom. For more information: 347-840-1242. ### 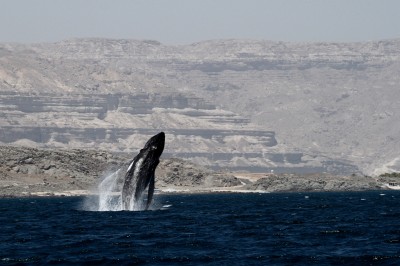 Caption: A whale breaches in the Arabian Sea, home to the smallest and most isolated humpback whale population in the world, with less than 200 individuals remaining. 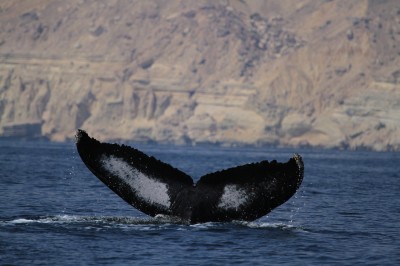 Caption: A humpback whale dives in the Arabian Sea.