Mathematician identifies new tricks for the old arch in our foot 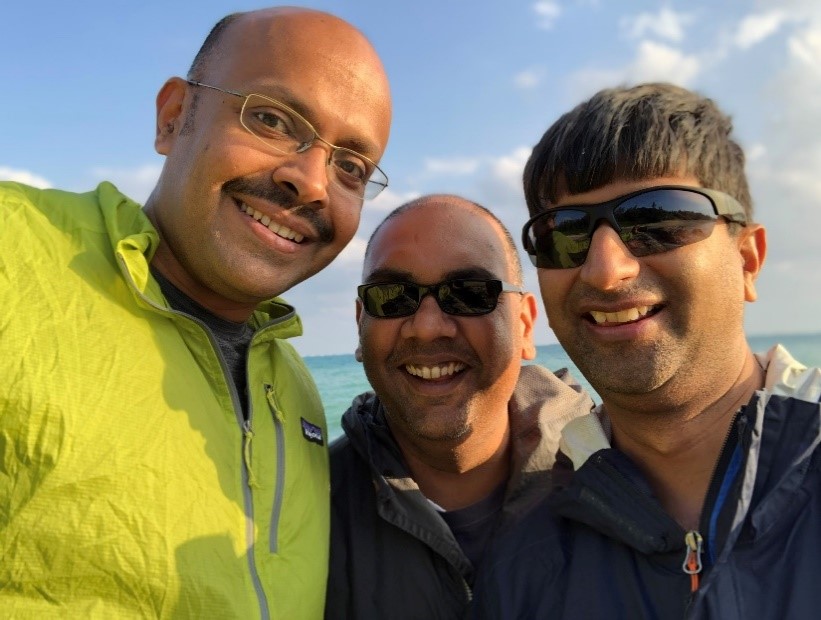 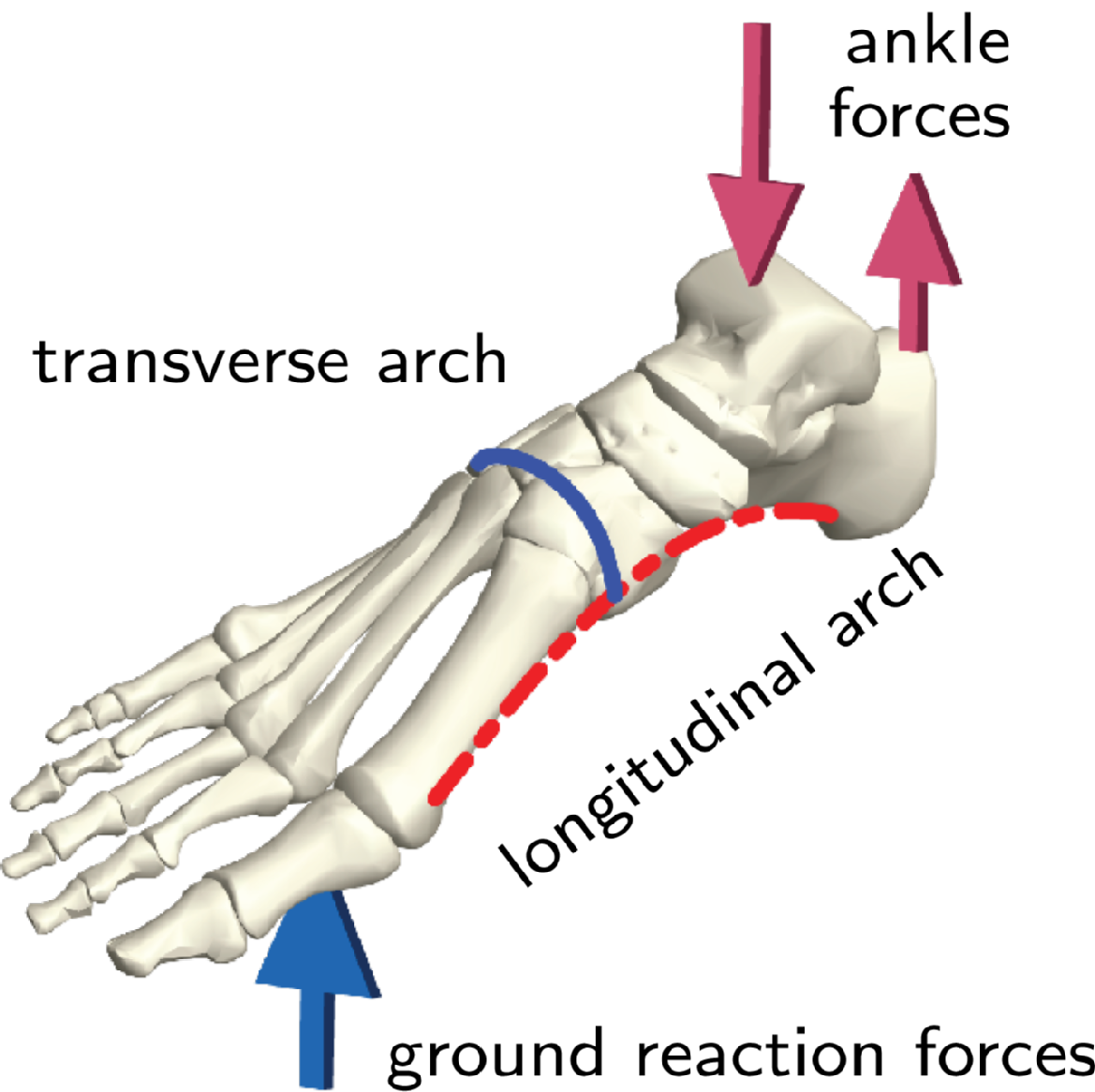 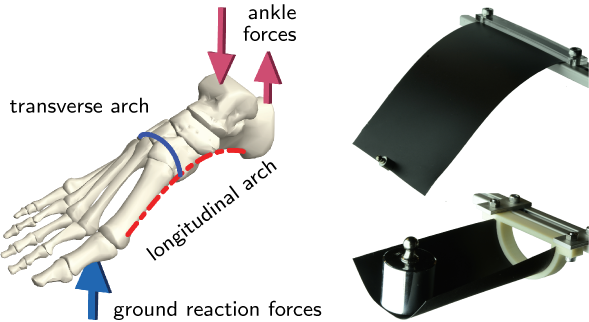 Schematic of the foot skeleton showing the arches and typical loading pattern. (top right) A sheet of paper bending under a 5g weight. (bottom right) Same sheet as top but with a transverse arch supporting 500 g of weight. 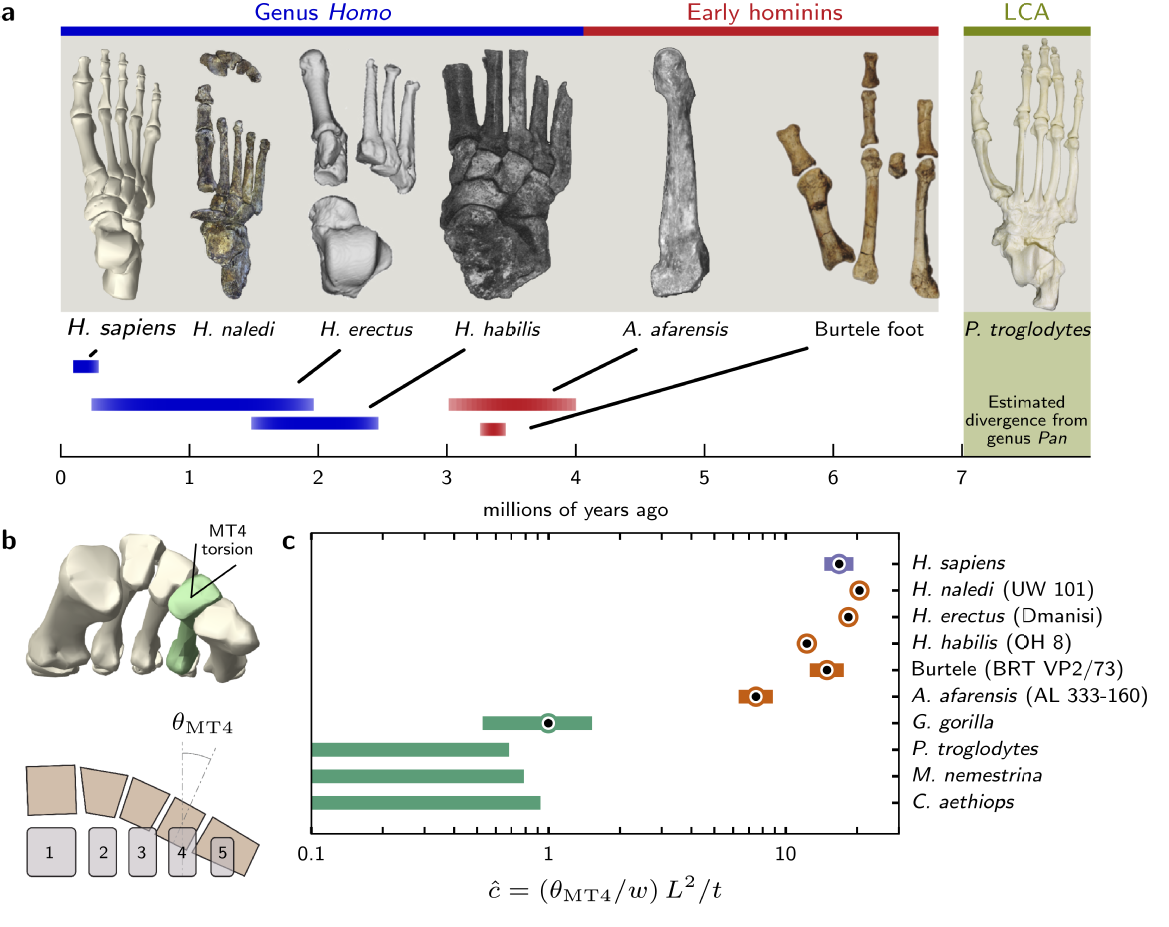 Newswise — Walking and running subjects our feet to forces in excess of body weight. The longitudinal arch of the feet was thought to be the reason the feet do not deform under such load. However, researchers from the University of Warwick, Okinawa Institute of Science and Technology Graduate University in Japan and Yale University have illustrated that the transverse arch may be more important for this stiffness.

Past theories of the foot stiffness look at the longitudinal arch, however in the paper ‘Stiffness of the human foot and evolution of the transverse arch’ published today, the 26th of February in the journal Nature, researchers from the University of Warwick working in collaboration with Yale University and OIST Graduate University, propose the transverse arch may play an equally important role.

This collaboration between Dr Shreyas Mandre, from the Department of Maths at the University of Warwick,  Professor Mahesh Bandi, from the Nonlinear and Non-equilibrium Physics Unit at the Okinawa Institute of Science and Technology Graduate University (OIST) and Professor Madhusudhan Venkadesan, from Yale University was funded by a Young Investigator award by the Human Frontiers Science Program.

The authors say that this research motivates further work into the role of the transverse arches in the disciplines of podiatry and evolutionary anthropology. These insights could also inspire new designs for prosthetic and robotic feet.

The role of the transverse arch may be understood in simpler terms by looking at a thin paper sheet. When the short edge is held flat, the sheet is floppy and droops under a little weight. But curl the edge a little and even 100 times as much weight is not excessive.

“Flat thin objects like paper sheets bend easily, but are much difficult to stretch,” Dr. Mandre explains. “The transverse curvature of the sheet engages its transverse stretching when attempting to bend it. This coupling of bending and stretching due to curvature is the principle underlying the stiffening role of the transverse arch.”

But because the foot serves multiple mechanical functions, its structure is more complicated than the paper sheet. Therefore, “flattening” the foot to test the hypothesis of curvature-induced stiffening may have unidentified confounding variables. To overcome this difficulty, the researchers ingeniously disrupted the underlying principle while keeping the transverse arch intact.

“Understanding of the underlying principle enabled us to build mechanical mimics of the foot comprising springs that imitated the elastic tissue of the foot. Disrupting the transversely oriented springs in these mimics had the same effect as flattening them,” explains Ali Yawar, a co-author of the study.

“We disrupted the underlying principle of curvature-induced stiffening in human cadaveric feet by transecting the transverse tissue, which reduced the mid-foot stiffness by nearly half,” said Carolyn Eng, another co-author of the article. In comparison, experiments in the 1980’s on disrupting the stiffening mechanism due to the longitudinal arch only showed a reduction in stiffness by about 25%.

This research also injects new interpretation of the fossil record of human ancestral species, especially pertaining to the emergence of bipedalism. The researchers formulated a measure of the transverse arch to accounts for variations in the length and thickness of the feet. They used the measure to compare related species such as the great apes, human ancestral species and some distantly related primates.

“Our evidence suggests that a human-like transverse arch may have evolved over 3.5 million years ago, a whole 1.5 million years before the emergence of the genus Homo and was a key step in the evolution of modern humans,” explains Prof. Venkadesan.  It also provides a hypothesis for how Australopithecus afarensis, the same species as the fossil Lucy, thought to not possess longitudinally arched feet, could generate footprints like humans that were discovered in Laetoli.

Caption: Schematic of the foot skeleton showing the arches and typical loading pattern during locomotion

Caption: Schematic of the foot skeleton showing the arches and typical loading pattern. (top right) A sheet of paper bending under a 5g weight. (bottom right) Same sheet as top but with a transverse arch supporting 500 g of weight.

Caption: Figure form the paper demonstrating the evolution of feet from monkeys to early hominins

Caption: Video showing forces that cause slight bending of the foot during a run