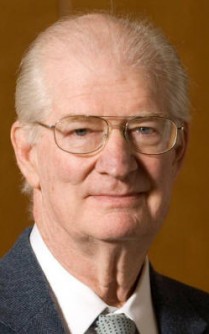 Newswise — Pioneering University of Maryland ecological economist, Herman Daly, will receive a lifetime achievement award from the National Council for Science and the Environment on Thursday, January 21 – recognizing his decades-long research into the underpinnings of a Green Economy. http://www.publicpolicy.umd.edu/directory/daly

Daly began researching the fusion of economics and ecology in the 1970s. He argues that conventional economics fails to account for the true costs of environmental degradation, making a loss of value appear to be a gain.

Instead, Daly’s ecological approach adds the hidden environmental costs to the equation. The natural world can no longer “sustain the existing oversized economy – much less a growing one,” he contends. “Growth is more of the same stuff; development is the same amount of better stuff.” http://www.sd-commission.org.uk/publications/downloads/Herman_Daly_thinkpiece.pdf

While Daly acknowledges that his ideas are “gaining attention,” he says “the dominant view is still very much for growth as usual, or perhaps with a few more regulations.”

“Herman Daly’s intellectual courage and persistence represent far more than personal achievement – they have stimulated and prodded a vital international policy and research debate,” says University of Maryland President, C.D. Mote, Jr. “He embodies intellectual integrity that brings honor to the University, and we congratulate him on this well-deserved recognition.”

“He is a giant in the field,” adds Donald Kettl, dean of the Maryland School of Public Policy, where Daly has been a senior researcher since 1994. “We are very proud to celebrate this national recognition of the way Herman has shaped modern debate on the mega-environmental issues we face. This award is a wonderful and much-deserved recognition of his many contributions to environmental policy.”

The International Institute for Sustainable Development has described Daly as “a maverick economist on a mission to give his discipline a heart.” http://www.iisd.org/didigest/special/DALY.HTM

In a 2008 article written for the UK’s Sustainable Development Commission, an independent government watchdog, Daly argued that “We cannot continue growing.” What is often called “economic” growth is too often “uneconomic” and a losing proposition, he wrote. Increasing “environmental and social costs faster than production benefits,” makes us “poorer not richer, at least in high consumption countries.”http://www.sd-commission.org.uk/publications/downloads/Herman_Daly_thinkpiece.pdf

In 1994, Daly stepped down after six years as senior economist in the World Bank’s environment department – a period in which he says he tried to “green the Bank’s economists.”

Daly’s public “farewell speech” offered a prescription for a World Bank more open to sustainable development: "A few antacids and laxatives to cure the combination of managerial flatulence and organizational constipation” along with "new eyeglasses and a hearing aid.” Specifically, he argued for a more realistic accounting of how proposed development projects would deplete a nation’s natural resources.http://www.whirledbank.org/ourwords/daly.html

From the World Bank, Daly came to the University of Maryland’s School of Public Policy – where he would be only nine miles from Washington, D.C. and his former colleagues.

AWARDS AND RECOGNITION INCLUDE: In 1996, Daly received the Heineken Prize for Environmental Science awarded by the Royal Netherlands Academy of Arts and Sciences, and the Right Livelihood Award, Sweden's alternative to the Nobel Prize. In 1999 he was awarded the Sophie Prize (Norway) for contributions in the area of Environment and Development; in 2001 the Leontief Prize for contributions to economic thought, and in 2002 the Medal of the Presidency of the Italian Republic for his work in steady-state economics.

NATIONAL COUNCIL AWARD: Daly will provide brief remarks during the award ceremony, which is open to the public. The full conference will take place from January 20-22 at the Ronald Reagan Building and International Trade Center in Washington, DC. More information at http://www.ncseonline.org/conference/greeneconomy

The National Council for Science and the Environment is a not-for-profit organization dedicated to improving the scientific basis for environmental decision making – based on an accurate understanding of the underlying science, its meaning and limitations, and the potential consequences of their action or inaction.