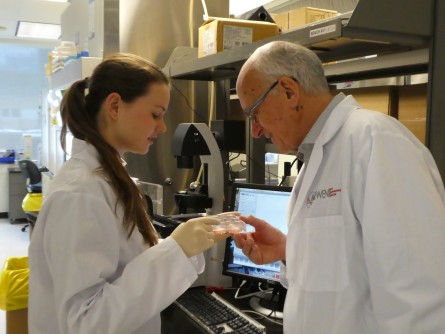 Dr. Stephanie Protze, post-doc fellow and Dr. Gordon Keller, Director of the McEwen Centre for Regenerative Medicine, examine a cell cuture plate with human pacemaker cells generated from pluripotent stem cells for the first time. This development paves the way for a biological pacemaker taking the place of an electronic one.

This is an in-vitro (petri dish) demonstration of pacemaker heart cells generated from human stem cells from the McEwen Centre for Regenerative Medicine. Shown are a cluster of human pacemaker cells on top of a sheet of human heart muscle cells. The pacemaker cells initiate and regulate the heartbeat of the heart cells below.

Their findings, “Sinoatrial node cardiomyocytes derived from human pluripotent cells function as a biological pacemaker,” published online in Nature Biotechnology on Dec. 12, detail how human pluripotent stem cells can be coaxed in 21 days to develop into pacemaker cells, which regulate heart beats with electrical impulses. These human pacemaker cells were tested in rat hearts and were shown to function as a biological pacemaker, by activating the electrical impulses that trigger the contraction of the heart.

Pluripotent stem cells have the potential to differentiate into more than 200 different cell types that make up every tissue and organ in the body.

The researchers used a developmental-biology approach to establish a specific protocol for generating the pacemaker cells.

“What we are doing is human biology in a petri dish,” says Dr. Gordon Keller, Director of the McEwen Centre, the senior author, and a trailblazer in generating a wide variety of specialized cells from human stem cells. “We are replicating nature’s way of making the pacemaker cell.”

Based on previous findings in animal models, the researchers at the McEwen Centre tested and mapped out the specific developmental pathway of how human pluripotent stem cells become pacemaker cells. This was achieved by testing different signaling molecules at different times throughout the 21 days to guide the cells towards their goal.

“It’s tricky,” says Dr. Stephanie Protze, a post-doctoral fellow in the laboratory of Dr. Keller and the first author in the Nature paper. “You have to determine the right signaling molecules, at the right concentration, at the right time to stimulate the stem cells.”

Adds Dr. Keller, who is also a Professor in the Department of Medical Biophysics at the University of Toronto: “We understand the importance of precision in developmental biology in setting out the process by which organisms grow and develop. We use that same precision in the petri dish because we are replicating these same processes.”

Once the team established which signaling pathways are activated at different stages to generate the pacemaker cells, they demonstrated that the new pacemaker cells could initiate and regulate the heartbeat in rats.

The researchers noted that human clinical trials to test such biological pacemakers are from five to 10 years away, and that the next step is to launch safety and reliability pre-clinical trials on the pacemaker cells.

Meanwhile, researchers can use their new technology to make pacemaker cells from patients suffering from pacemaker dysfunction. They can then use these patient-specific cells to study the “disease in a (petri) dish” and to identify new drugs that will improve their pacemaker function.

Long term, the team hopes to develop a biological pacemaker to transplant into patients who need an electronic one. More than 10,000 electric pacemakers are implanted annually in Canada, with more than 120,000 patients living with them. They can last anywhere from five to 10 years or more - on the average about seven years. If successful, the biological pacemaker holds the promise of a lifelong cure.

This research is part of an international collaboration with Dr. Lior Gepstien from Technion Insitute of Technolgy and Dr. Peter Backx, Senior Scientist at the Peter Munk Cardiac Centre and Toronto General Research Institute, UHN. The partnership of UHN, Technion, the McEwen Centre for Regenerative Medicine and the Peter Munk Cardiac Centre, under the International Centre for Cardiovascular Innovation, is the largest scientific collaboration of its kind.

Philanthropic donations to the Toronto General & Western Hospital Foundation and the Canadian Institutes of Health Research (CIHR) funded this research.

About the McEwen Centre for Regenerative MedicineThe McEwen Centre for Regenerative Medicine was founded with generous donations from Rob and Cheryl McEwen. The centre includes 16 scientists at five Toronto hospitals, as well as the University of Toronto. Currently, these scientists are working to accelerate the development of more effective treatments for conditions such as heart disease, diabetes, liver disease, arthritis and diseases of the blood like leukemia. The McEwen Centre is supported by philanthropic contributions and research grants, and is based at University Health Network in Toronto, Canada.