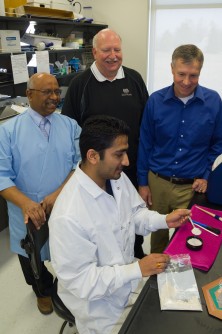 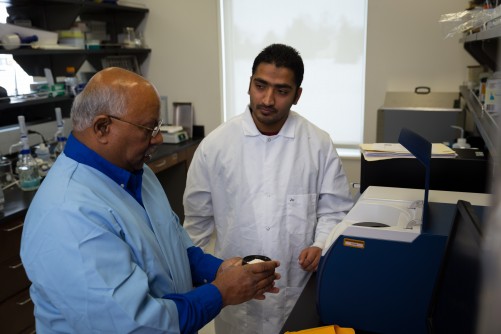 South Dakota State University cereals chemist Padu Krishnan, a professor in the Department of Dairy and Food Sciences, and graduate student Devendra Paudel discuss using a wide variety of oats, thanks to the support of General Mills and Grain Millers, Inc., to develop a robust near-infrared spectrometer calibration to detect beta glucan. 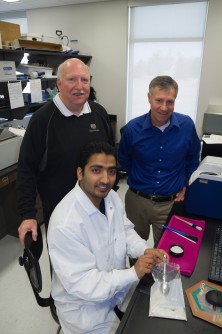 Newswise — When it comes to the cholesterol-lowering power of oats, it’s the beta glucan that matters. That’s why General Mills and Grain Millers joined forces to support research at South Dakota State University to determine beta glucan levels in oats.

A food product must contain at least 0.75 gram of beta-glucan soluble fiber from whole oats per serving to use the “heart healthy” label, according to the Food and Drug Administration. A one-cup serving of Cheerios contains 1 gram, as does a small bowl of hot oatmeal.

The industry has struggled for 20 years to get a quick, accurate test for measuring beta glucan, explained Bruce Roskens, director of crop sciences at Grain Millers Inc. Rabaey agreed, “Beta glucan is difficult to measure.”

A chemical procedure known as the Megazyme Method is one of the traditional methods of determining beta-glucan content in oats. Enzymes that mimic the stomach are added to the dried, defatted sample and then the resulting sugars are measured based on color intensity using ultraviolet visible spectrophotometer.

“It costs more than $400 to analyze 50 samples in duplicate—that’s very expensive when large numbers of samples are involved,” Krishnan said.

NIRS uses reflected energy to quantify beta-glucan levels in a sample of ground, dehulled oats.  The nutrients in grain absorb and reflect near-infrared energy.  That creates a unique spectra, much like a fingerprint, explained Krishnan.

Known values of beta glucan from chemical analyses are correlated with the spectral files.  Calibrations essentially train the software to quantify the reflective values for beta-glucan, according to Krishnan.

To do this, South Dakota State graduate student Devendra Paudel analyzed nearly 500 reference samples. A validation sample set made up of several hundred independent samples is used to determine how close the NIRS-predicted values are to the true values.

“To get a good correlation, we needed a wide range of oats grown in multiple locations, a very diverse population,” Krishnan explained. “From high to low beta-glucan levels, the NIRS results must accurately compare with the wet chemistry.”  A wide range allows for a better linear relationship between NIRS values and true values.

In addition to oat samples from South Dakota breeding lines, the researchers analyzed varieties from Iowa, North Dakota, Minnesota, Illinois and Washington, thanks to Rabaey and Roskens, who are both South Dakota State alumni.

“That’s part of the benefit of industry involvement—our supply chain is focused on North America and we get to see various practices,” Rabaey said. “That variety in genetic background is what makes this calibration more valuable,” added Roskens.

The university researchers also scanned samples from multiple years because the growing conditions also affect the characteristics of the grain. “We have a very robust calibration—and it takes less than a minute to scan a sample,” said Krishnan. The next step will be to test the calibration on dehulled, unground oat groats.

The near-infrared calibration can now be used, not only by General Mills and Grain Millers, but also by oat breeders, including South Dakota State’s Melanie Caffé-Treml, to screen germplasm early in the breeding process.

“Oat varieties need to be both low in fat and high in beta glucan,” Krishnan noted. The researchers can measure beta glucan, fat and protein using the near-infrared spectrometer.

“A single platform to measure multiple constituents simultaneously and within seconds—that is powerful information for the breeder and the food processor,” Krishnan notes.

“We’re fortunate to have Padu here working with Melanie,” Rabaey said. In the 1990s, the oats in food products came from the United States, but now 90 percent of the oats Americans consume comes from Canada. However, Rabaey pointed out, Canada has a shorter growing season and the oats tends to be lower in beta glucan and protein.

“Breeders have so many objectives—yield, disease resistance, standability,” Roskens said. Using this near-infrared measurement, breeders can test lines at the F3 or F4 stage, before it goes to the field.

“We know South Dakota has very good agronomics in its oat lines,” continued Roskens. As producers start to diversify their crop rotations, Rabaey said, “oats is getting more attention than it has in quite some time.”  Roskens points to oats as being beneficial to the soil and a means to break disease cycles.

“In the last couple of years, we’ve rediscovered SDSU and we’re excited about the opportunities here,” Rabaey said. “As the demand for high-quality, food-grade oats continues to grow, we see increasing need for multiple sourcing areas that includes the Dakotas.” 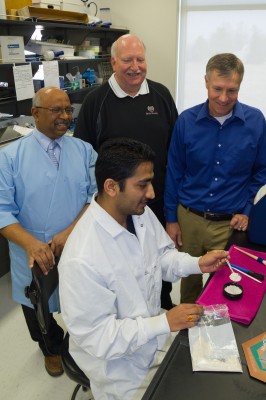 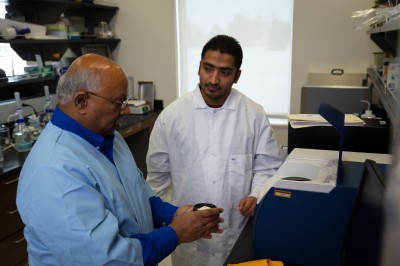 Caption: South Dakota State University cereals chemist Padu Krishnan, a professor in the Department of Dairy and Food Sciences, and graduate student Devendra Paudel discuss using a wide variety of oats, thanks to the support of General Mills and Grain Millers, Inc., to develop a robust near-infrared spectrometer calibration to detect beta glucan. 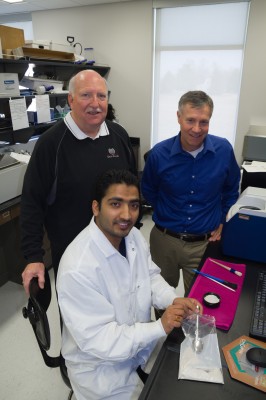