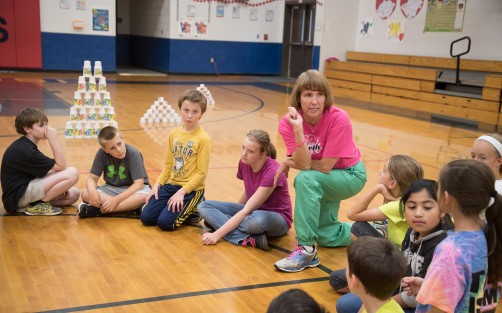 Newswise — WINSTON-SALEM, N.C. – July 13, 2016 – Because Valerie Prim grew up in a large Italian family, food has always been an important part of her life. “Everything about food was big,” Prim said. “You never thought about what you ate.”

But a few years ago, when Prim was dealing with a job-structure change and a case of empty nest syndrome, food became a bigger part of her life – and not for the better. The longtime swimmer, aquatics instructor and physical education teacher fell into a deep depression and turned to eating as a coping mechanism.

The fast-food restaurants of Yadkinville, North Carolina, where Prim lives, beckoned all too often, and her weight rose from under 150 pounds to over 220. She also developed high blood pressure, was close to being pre-diabetic and was unable to participate in physical activities with her students because of pain in her knees and other joints. Stories like Prim’s are common. A Centers for Disease Control and Prevention study released in June found that 38 percent of American adults are obese in terms of body mass index, a measure of body fat calculated from weight and height. Three years ago, the American Medical Association declared obesity a disease.The AMA’s action was important to Jamy Ard, M.D., co-director of the Weight Management Center at Wake Forest Baptist Medical Center in Winston-Salem, which offers both medical weight-control programs and weight-loss (bariatric) surgery.

“Historically, providers have been taught directly or implicitly that obesity is more of a character flaw, that it’s related to being lazy and inactive,” Ard said. “Now, we have the AMA designation of obesity as a disease, which has been influenced by progress in the science of obesity. As a result, we’re changing people’s attitudes, and the next step is to improve access to more medical treatment for obesity.”

Ard noted that commercial weight-loss programs gained traction long before obesity was understood to be a chronic disease. But most of those programs have centered on diet rather than lifestyle changes, he said, whereas medical weight loss focuses “on the ideal weight for you to do the things you want to do and be healthy.”

For people with serious weight problems who are not interested in or candidates for bariatric surgery, Wake Forest Baptist’s center has two physician-supervised weight-loss programs that go beyond diet and exercise to tackle obesity from multiple angles.

Through the Optifast program, Prim lost about 70 pounds. More importantly, she has kept off nearly all of that weight.“This was a lifestyle change,” said Prim, 58. “This was not just about losing weight. It was about getting healthy again, having energy, feeling good. It didn’t matter what my body looked like; I wanted to be able to teach these kids.”

Annette Frain, a dietitian with the Weight Management Center, said attitude goes a long way toward success for medical weight-loss patients.“If someone is looking to me for a ‘diet,’ I’m the first to turn them away,” she said. “Fundamentally, they have to change their relationship with food.”Wake Forest Baptist’s patients learn how they often eat in response to the stresses in life and are taught ways to change their behaviors over time. “It sets our program apart from others,’’ Frain said.

Measuring the lasting effects of medical weight-loss programs is difficult, Ard said. While studies have shown that the majority of bariatric surgery patients maintain at least a loss of 50 percent of their excess weight over time, the field of medical weight loss is so new that long-term data on success rates is not yet available.

“What I tell people is that they need to stay connected, come to their maintenance visits and continue to go to group classes to be successful in maintaining weight loss,” Ard said. “We’re also trying to develop more electronic engagement, ways to capture data via a wearable device.”The Weight Management Center’s medical weight-loss programs suggest that people eat up to five times a day – three meals and two snacks – but with limited calories. And the calories they do consume must include protein. Prim, for example, often snacks on Greek yogurt, which is low in fat and high in protein. She began collecting her empty yogurt cups for teaching purposes, and her fellow educators and administrators in the Yadkin County school system began sharing their empty cups with her.

Today, Prim uses those hundreds of empty yogurt cups in athletic activities with her students, as towers to race, hop or skip around, for example. She hopes her healthier lifestyle sets a positive example for her students and colleagues.