The Cal Poly Pomona political science major, and one of two student voices on the CSU Board of Trustees, wants to put students' basic needs front and center. 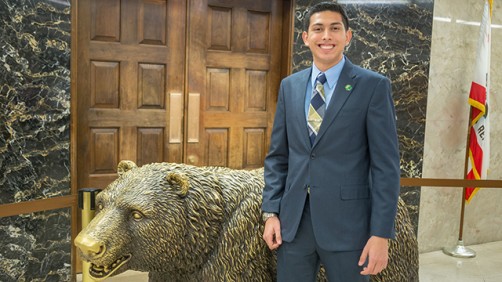 ​García will participate in his first CSU Board of Trustees meeting in September 2018. The third-year student at Cal Poly Pomona wants to study law and sees the CSU's Basic Needs Initiative as a top focus for his time as student trustee. "Cal State students are worried about basic needs—we want more mental health resources and we want to make sure that students aren't facing food insecurity," he notes.

Newswise — The Cal Poly Pomona political science major, and one of two student voices on the CSU Board of Trustees, wants to put students' basic needs front and center.

​Now in his third year at California State Polytechnic University Pomona, Juan Fernando García has been appointed the new student trustee to the CSU Board of Trustees by Governor Jerry Brown. The 19-year-old, who was born in Guatemala and arrived in the U.S. with his family when he was eight, graduated from Los Osos High School in Rancho Cucamonga.

Today, he's majoring in political science and minoring in American history and got involved with student government as soon as he started at Cal Poly Pomona—in his freshman year he was part of ASI Lobby Corps (a volunteer body of student government) and met elected officials while lobbying on behalf of Cal Poly students.

García also sat on the committee that helped to create the recently-opened Dream Center at Cal Poly. Last year ,he was the Secretary of Legislative Affairs in the California State Student Association (CSSA). Attending CSSA meetings inspired him to apply for the position of trustee.

The articulate, upbeat García, who lives with his family of four siblings, mom and dad, looks forward to attending the first Board of Trustees meeting in September 2018.

Q: What was your application process for this position?

A: Juan Fernando García: There was an application with a prompt for an essay—I had to submit that with my resume to the student trustee committee of CCSA who reviews the pool of applications and decides who moves on from there. Then I interviewed with campus student body presidents who determined the finalists' names, which were sent to Governor's office.

This year was weird; the law had changed recently. Now you have to be a U.S. citizen to serve on statewide boards or commission. I was a green card holder and had already applied to become a citizen, but the process can take a year. A few months after I was chosen as a finalist I still wasn't a citizen. The staff at Cal Poly Pomona moved heaven and earth for me—they contacted our representatives in Congress, and I was able to become a citizen just in time, on July 25. The announcement of my appointment was made on Monday, August 13.

Q: Are you excited about the role or nervous?

A: Juan Fernando García: I'm definitely excited. I know it is such a big responsibility, a big role, and I'm a little nervous. Nobody from Cal Poly Pomona has ever been in this position. I'm very determined to make it my own. The hard thing about the position is to distance yourself from your own campus and see things from a systemwide perspective.

Q: Have you been to all of the campuses?

A: Juan Fernando García: Not all of them. But I've talked to most of the student presidents; they go to all the CSSA meetings. I will try and see their perspective on certain issues and how they wish to be represented.

Q: What do you see as the primary concerns of the students right now?

A: Juan Fernando García: The biggest thing is the Basic Needs Initiative. Typically, the main concern is around tuition increases, but luckily this year we've avoided that. Cal State students are worried about basic needs—we want more mental health resources and we want to make sure that students aren't facing food insecurity. At plenary meetings, some students tell their stories and they are heart-wrenching.

Q: What do you want to do after you graduate?

A: Juan Fernando García: I want to go to law school. People ask me if I want to run for office, but I want to practice law and try to help people that way. I want to study constitutional law more than anything. I'm studying for the LSAT now.

Q: When do you officially start as student trustee?

A: Juan Fernando García: I've already started! The first Board of Trustees meeting is September 11 and 12 at the Chancellor's Office in Long Beach, but my job began as soon as I was appointed.

Learn more about the CSU Board of Trustees and watch the livestreamed meeting on September 11 and 12, 2018 on Calstate.edu. To find campus resources for students facing food and housing insecurity, visit Student Well-Being and Basic Needs.