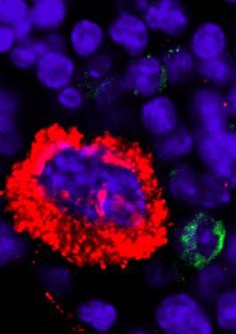 A hematopoietic stem cell (green) attaches to a megakaryocyte (red) in bone marrow.

Newswise — Kansas City, Mo. - While megakaryocytes are best known for producing platelets that heal wounds, these “mega” cells found in bone marrow also play a critical role in regulating stem cells according to new research from the Stowers Institute for Medical Research. In fact, hematopoietic stem cells differentiate to generate megakaryocytes in bone marrow. The Stowers study is the first to show that hematopoietic stem cells (the parent cells) can be directly controlled by their own progeny (megakaryocytes).

The findings from the lab of Stowers Investigator Linheng Li, Ph.D., described in the Oct. 19 issue of the journal Nature Medicine, could cause researchers to rethink what they know about the workings of megakaryocytes and potentially lead to new treatments for patients recovering from chemotherapy or organ transplantation.

“Our results suggest that megakaryocytes might be used clinically to facilitate adult stem cell regeneration and to expand cultured cells for adult stem cell transplants,” says Meng Zhao, Ph.D., a postdoctoral fellow at Stowers and lead author on the study.Stowers researchers discovered that megakaryocytes directly regulate the function of murine hematopoietic stem cells—adult stem cells that form blood and immune cells and that constantly renew the body’s blood supply. These cells can also develop into all types of blood cells, including white blood cells, red blood cells, and platelets. Because of their remarkable ability to renew themselves and differentiate into other cells, hematopoietic stems cells are the focus of intense research and have been used to treat many diseases and conditions. The transplantation of isolated human hematopoietic stem cells is used in the treatment of anemia, immune deficiencies and other diseases, including cancer.

These findings are supported by similar research from the laboratory of Paul S. Frenette, Ph.D., at the Albert Einstein College of Medicine, also reported in the Oct. 19 issue of Nature Medicine.

Engineering a megakaryocyte niche (a special environment in which stem cells live and renew) that supports the growth of hematopoietic stem cells in culture, is the next step for the researchers. Zhao and his colleagues are also investigating whether a megakaryocyte niche can be used to help expand human hematopoietic stem cells in vitro and stem cell transplantation for patients. Other contributors to the study include John M. Perry, Ph.D., Heather Marshall, Ph.D., Pengxu Qian, Ph.D., and Xi C. He, Ph.D., with the Stowers Institute; Aparna Venkatraman, Ph.D., with the Stowers Institute and the Centre for Stem Cell Research at Christian Medical College in Vellore, India; and Jasimuddin Ahamed, Ph.D., with the Laboratory of Blood and Vascular Biology at Rockefeller University in New York.

The Stowers Institute for Medical Research funded the research.

Patients recovering from chemotherapy or organ transplantation often have dangerously low levels of blood cells—leaving them weak and vulnerable to infection. Research findings from the Stowers Institute, reported in the Oct. 19 issue of the journal Nature Medicine, describe new insights that could potentially lead to treatments for patients with low blood cell counts. Stowers Investigator Linheng Li, Ph.D., who led the study explains that megakaryocytes, “mega” cells found in bone marrow, regulate the function of human blood stem cells—adult stem cells that form blood and immune cells and constantly renew the body’s blood supply. He and his colleagues found that megakaryocytes tell blood stem cells when their services aren’t needed and when they need to start proliferating to meet increased demand. Study results suggest that megakaryocytes might be used clinically to jump-start adult stem cell regeneration and to expand cultured cells for adult stem cell transplants.