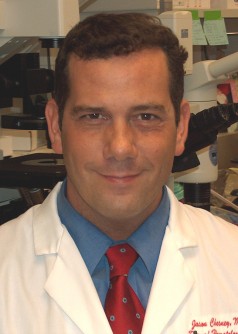 Newswise — LOUISVILLE, Ky. – It’s a new weapon in the arsenal of cancer fighting treatments: utilizing genetically modified viruses to invade cancer cells and destroy them from the inside.

University of Louisville researcher Jason Chesney, M.D., Ph.D., deputy director of the James Graham Brown Cancer Center (JGBCC), and a team of international scientists found that stage IIIb to IV melanoma patients treated with a modified cold sore (herpes) virus had improved survival. The results of the findings were published recently in the Journal of Clinical Oncology.

UofL was one of the major sites for the phase III clinical trial involving 436 patients who received the viral immunotherapy, talimogene laherparepvec (T-VEC). Scientists genetically engineered the herpes simplex I virus to be non-pathogenic, cancer-killing and immune-stimulating. The modified herpes virus does not harm healthy cells, but replicates when injected into lesions or tumors, and then stimulates the body’s immune system to fight the cancer.

“The results from this study are amazing,” Chesney said. “Patients given T-VEC at an early stage survived about 20 months longer than patients given a different type of treatment. For some, the therapy has lengthened their survival by years. ”

Shari Wells from Ashland, Kentucky is one of those patients. She entered the trial in 2010 with stage IV, or metastatic, melanoma. Before entering the T-VEC trial, she had been through numerous procedures and major surgeries. According to Wells, nothing worked and she was facing a death sentence.

“When you hear that you may only have three to six months to live, it is very scary,” Wells said. “I would not be alive today if I had not been accepted into the T-VEC trial. Dr. Chesney and the James Graham Brown Cancer Center saved my life.”

Wells drove to Louisville every two weeks for about two and a half years to receive injections in each of the more than 60 lesions on her leg. The lesions eventually began to fade and finally disappeared. She has been in remission for almost eight years.

“I want everyone to know they should never give up hope. With research there will always be something new tomorrow that wasn’t here today,” she said.

The U.S. Food and Drug Administration (FDA) and the European Medicines Agency (EMA) are considering findings from the trial to make the treatments available to more patients with advanced melanoma.

The Journal of Clinical Oncology report comes on the heels of Chesney’s findings from another study published this month in the New England Journal of Medicine.

The article describes an immunotherapy for melanoma utilizing the checkpoint inhibitors, ipilimumab and nivolumab. In cell biology, their role is to reduce the effectiveness of two immune checkpoint proteins responsible for telling the immune system to turn off and not kill the cancer cells.

The study found that injection of the two inhibitors shrunk tumors in the majority of patients with advanced melanoma. The JGBCC was one of the top centers worldwide to enroll patients and find that ipilimumab combined with nivolumab resulted in the highest anti-cancer efficacy ever observed after treatment with a cancer immunotherapy.

Chesney and his team, working with the pharmaceutical company Amgen, are taking the success of their trials a step further – combining T-VEC with the immune checkpoint inhibitor ipilimumab into a treatment regimen. The clinical trial is underway at the JGBCC and other sites in hopes of accelerating cancer immunity and curing patients.

“We finally understand how to activate the human immune system to clear cancer cells, having developed new classes of immunotherapies that dramatically improve the survival of cancer patients,” Chesney said. “I believe T-VEC combined with immune checkpoint inhibitors will not only reduce cancer-related mortality in melanoma but in all cancer types, and we are moving quickly to develop these methods.”

Learn more about all melanoma and sarcoma related clinical trials at : http://browncancercenter.louisville.edu/pcare-and-clintrials/mel-sarc/melanoma-and-sarcoma or by contacting the Clinical Trials Office, [email protected], 502-562-3429.

Find this complete story on the UofL School of Medicine website: http://louisville.edu/medicine/uofl-part-of-first-successful-study-of-virus-attack-on-cancer