Melvin Edwards, a renowned sculptor and a beloved professor of art, returns to Rutgers University to celebrate a retrospective showcasing 50 years of his pioneering work. 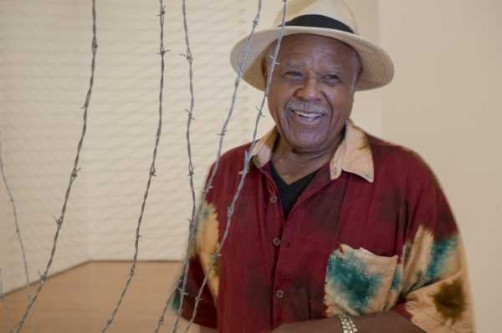 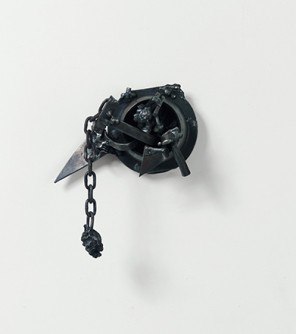 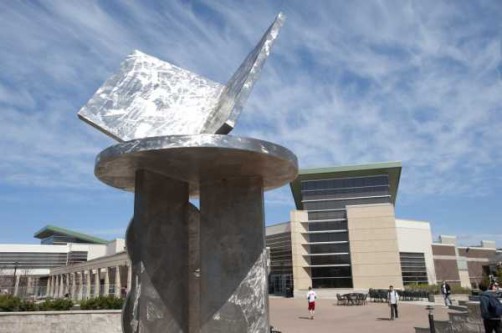 Melvin Edwards's sculpture “Education Is an Open Book,” 1987, outside of Kilmer Library, reminds students of the opportunities available through education.

Newswise — Melvin Edwards is coming home, bringing with him a powerful reminder of how and why he made history in the art world 45 years ago.

The renowned American sculptor who taught at Rutgers for 30 years is the subject of the traveling retrospective “Melvin Edwards: Five Decades,” which includes the re-creation of all four barbed-wire installations from his groundbreaking 1970 exhibition as the first African-American sculptor to have a solo show at the Whitney Museum of American Art. The show – organized by the Nasher Sculpture Center in Dallas and its associate curator Catherine Craft and on view at the Zimmerli Art Museum at Rutgers University-New Brunswick through January 10, 2016 – marks Edwards’s first retrospective in more than 20 years.

“My three decades at the university was a significant lifetime experience,” says Edwards, 78, who taught at Rutgers from 1972 to 2002. “Since my studio was close to campus, much of the work in this retrospective was influenced by being in New Jersey.”

The approximately 60 pieces in “Melvin Edwards: Five Decades” showcase the diversity of his oeuvre: “Lynch Fragments” (the series for which he is best known), maquettes of public sculpture, large welded-steel sculptures and rarely exhibited works on paper, including sketchbooks and collaborations with his late wife, the celebrated poet and performance artist Jayne Cortez, who also taught at Rutgers.

“As Rutgers celebrates its 250th anniversary, it’s an honor to exhibit the work of this revolutionary figure in American sculpture who spent many years of his career at the university,” says curator Donna Gustafson, who coordinated the exhibition for the Zimmerli.

Edwards worked with Gustafson, the museum installation crew and two graduate students at Mason Gross School of the Arts on the precise installation of the barbed wired works and many of the sculptures on view. “There is a bodily relationship to individual works – how they are displayed and how viewers relate to them,” says Gustafson. “All the ‘Lynch Fragments’ are hung at 69 inches, which is his eye level, and at 36 inches apart, half his arm span. Many of the sculptures on pedestals are set high, so that the viewer confronts them at eye level.”

Edwards, who made more than a few prints during his decades at Rutgers, has created two lithographs for the Brodsky Center that have the same aesthetic concerns as his abstract sculpture. His public sculpture “Education Is an Open Book” can be seen on Rutgers’ Livingston campus. The piece reflects his perspective on the purpose of universities: Their value lies in the possibilities presented.

As a professor – at Livingston College and later at Mason Gross – Edwards taught sculpture and drawing and created the pioneering course “An Introduction to Third World Artists,” for which he invited artists from countries such as Mozambique, Cuba and Nigeria. “Presenting art and artists that were not Eurocentric showed my students the variety that was in the world and the many ways they can approach their own work,” he says.

Edwards has traveled to Africa regularly since 1970 and creates sculptures that powerfully address African identity and universal ideals such as freedom and individualism. His pieces are included in the collections of the Museum of Modern Art and Metropolitan Museum of Art in New York City, among others, and have been exhibited worldwide. He divides his time among studios in Plainfield, New Jersey; Accord, New York; and Dakar, Senegal.

Patrick Strzelec studied with Edwards as a graduate student during the late 1980s and now teaches sculpture at Mason Gross. “Mel taught by example how we had to live in the world to make art,” he says. “He let the students find themselves through their work. That is his legacy to me – it is the same message I give my students.”

In the small circle that is the art world, Strzelec’s and Edwards’s professional paths have crossed: Their sculpture has been included in group shows, and Strzelec recently brought students to an exhibition of Edwards’s work in Manhattan. He’s now looking forward to seeing his mentor back on campus.

Although he was always available to meet with students to talk about their work whenever they wanted, Edwards kept his studio life separate. “That was my world and invention,” he explains. “My students, even my family, did not visit my studio.”

Through all his travels, Edwards says that Rutgers – and its students – will always have his heart. “I’m looking forward to coming back for the reception. I have fond memories here,” he says. “I so appreciated the experience of meeting students from all over the world.”

His advice for the next generations of artists is the same today as it was 30 years ago: “Find your own voice” – the title of one of his late wife’s poems that expresses a philosophy they both shared.

He believes that the most constructive influence a teacher can have is to encourage young artists to find their own ways of thinking. “They need to learn what message they want to convey,” he says. “I don’t want any student to simply mimic the artwork I create.”

Meet Melvin Edwards at an artist reception at the Zimmerli on September 24 from 5 to 7 p.m. and at a lecture sponsored by Mason Gross School of the Arts on September 30 at 6:30 p.m. in the Civic Square Building, Room 110, 33 Livingston Avenue, New Brunswick. Both events are free and open to the public. 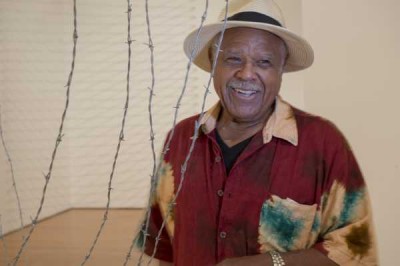 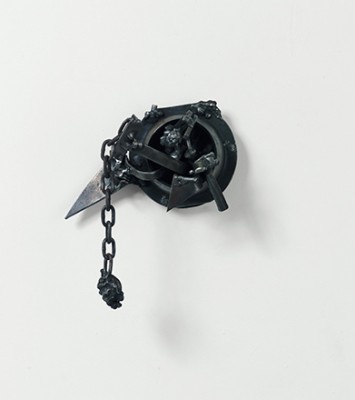 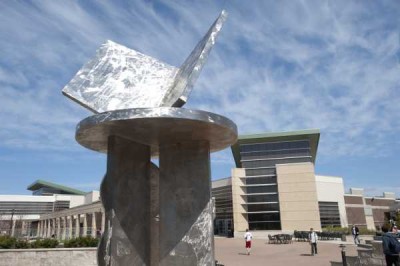 Caption: Melvin Edwards's sculpture “Education Is an Open Book,” 1987, outside of Kilmer Library, reminds students of the opportunities available through education.