Men with chronic kidney disease have worse outcomes than women 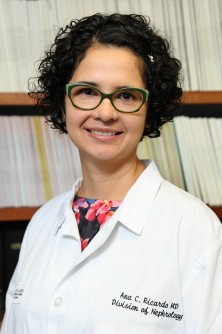 Newswise — Researchers at the University of Illinois at Chicago have found that men with chronic kidney disease, or CKD, are more likely to experience disease progression and death when compared with women suffering from the same condition.

CKD affects more than 26 million people in the United States. People with the condition experience gradual loss of kidney function. In severe cases or when left untreated, CKD causes kidney failure, which requires dialysis or a transplant for survival.

The study, which is published in the Journal of the American Society of Nephrology, included nearly 4,000 individuals — 1,778 women and 2,161 men — who were enrolled in the ongoing, multicenter Chronic Renal Insufficiency Cohort Study.

The UIC researchers analyzed the incidence of end-stage renal disease, or ESRD, estimated glomerular filtration rate (eGFR) trends — a key marker of kidney health — and death, and compared them by sex.

"We found that women had 17 percent lower risk of experiencing ESRD and the risk of death was 31 percent lower in women than in men," said Dr. Ana Ricardo, lead author of the study.

These differences persisted after adjustments for observed sex-related disparities in lifestyle and medical management, and after adjustment for sociodemographic characteristics, baseline kidney function, medications, and cardiovascular and metabolic factors.

Ricardo said the findings were particularly striking, as they observed men were more likely to be on kidney-protective medications.

"We've known for a long time that women are more likely to be diagnosed with chronic kidney disease, but there has been conflicting research on CKD outcomes by sex," said Ricardo, associate professor of medicine at the University of Illinois at Chicago College of Medicine. "This is the first study to analyze data from a large, representative sample of prospectively enrolled patients with various stages of chronic kidney disease.

"The results of this study suggest that biology and psychosocial factors may be the driver of the sex-related disparity observed in patients with CKD," Ricardo said.

Ricardo hopes the study increases public and care provider awareness of the higher risk of kidney failure and death among men.

Co-authors on the study from UIC are Anjella Manoharan, Dr. Martha Daviglus and Dr. James Lash.

Journal of the American Society of Nephrology