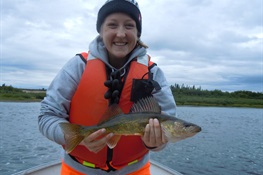 1. Scientists investigated current patterns of mercury in walleye and white sucker across a climatic gradient in northern Ontario, Canada, to assess the possible influence of climate change, which is predicted to alter many processes in boreal aquatic ecosystems.

2. They found that drainage basin characteristics and lake water chemistry, not long-term mean temperatures or precipitation, were currently the strongest indicators of mercury in fish.

3. They conclude that mercury levels in fish is not strongly associated with current climatic conditions across northern Ontario but may be influenced by climate change in the future through indirect effects on water chemistry and food web structure.